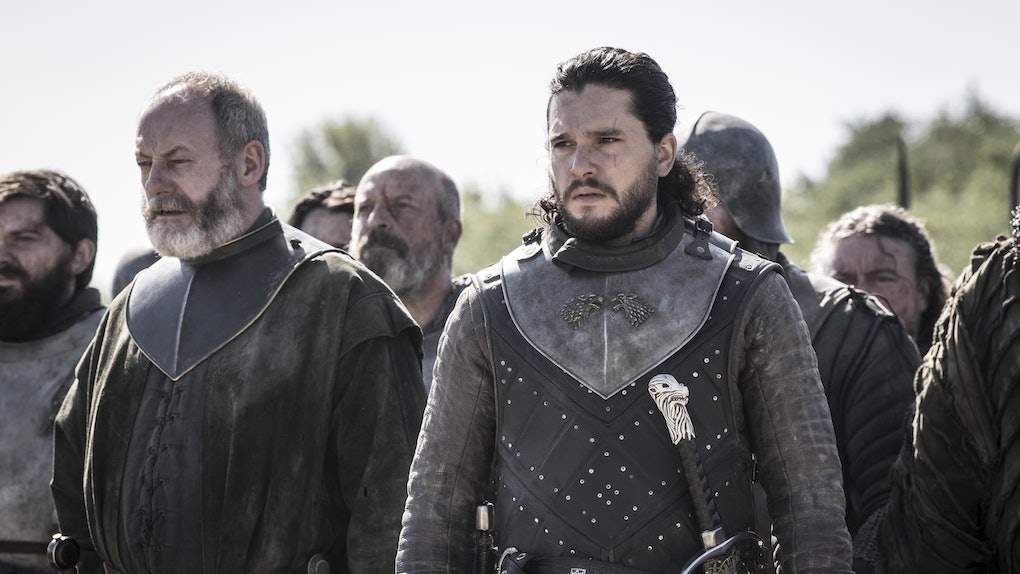 Where Is Jon Going At The End Of 'Game Of Thrones' ? His Final Shot Has Fans Asking Questions

The fact that Daenerys would die was almost certainly a given before the Game of Thrones finale began. After several seasons that saw the deaths of Ned Stark, Robb Stark, and Jon Snow, all unfairly targeted heroes who were trying to do their best, Daenerys destruction of King's Landing could not possibly go unpunished. Though she did not know it, her days on the Iron Throne were numbered before she sat down. But no one saw her death coming, least of all her, at the hands of Jon Snow. But where is Jon going at the end of Game Of Thrones? It was also a surprise, as many thought he might take the throne in her stead. Warning: Spoilers for Game of Thrones Season 8 follow.

While it took Game of Thrones a while to get around to the subtext of Jon Snow's parentage, the A Song of Ice and Fire series has been hinting at it since the mid-1990s. This has led legions of fans to assume his Targaryen birth was significant for the show's endgame, that he would be the rightful heir. The show only cemented the certainty at the end of Season 7, when they revealed Jon Snow was not only the son of Rhaegar Targaryen and Lyanna Stark but the legitimate son of their union. Rhaegar had annulled his first marriage to Elia and married Lyanna. Jon was not a bastard, after all.

However, it turns out that it was all so other people could think it was important. The series never meant to put Jon on the Iron Throne at all.

When Jon initially met Maester Aemon back in the first season, the old man revealed he had left King's Landing and volunteered to take the black, to remove himself from contention for the throne. I had always believed Jon Snow would follow Aemon's lead and do the same. When he quoted the "the death of duty" to Tyrion early on in the finale, I thought it was proof of what would come next.

But there was nothing voluntary about the decision. Grey Worm would have Jon Snow's head, Sansa would have him back north. So Bran and Tyrion chose to "split the baby," to use the biblical story, and give no one what they wanted.

In doing so, they actually gave Jon precisely what he wanted, even if he didn't know it. Jon loved the wildings when he was with them. He loved Ygritte, and he loved their ways. Moreover, his wolf, Ghost, was up there. Jon may be saying goodbye to Sansa, Arya, and Bran, but he's going to the place he's happiest, far away from the capital city, living wild and free, beyond the Wall.

One could see it in Jon Snow's face, as the wilding greeted him at Castle Black. It was in the triumphant music as the group of them all took their leave of the castle too. The Wall is no longer needed, with the Night King gone. The free folk are safe and happy and able to return to their lives, Jon with them.