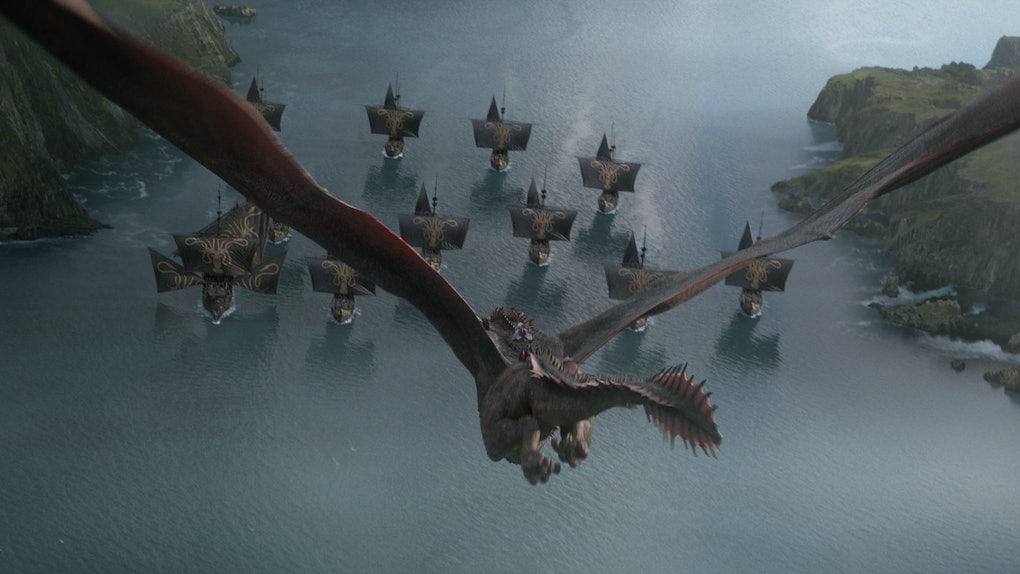 Where Is Drogon At The End Of 'Game Of Thrones'? His Whereabouts Will Remain A Mystery

Game of Thrones is a show that's been many things to many people. For some, it's about politics, for others, it's another the Night King and the magic that exists beyond the Wall. But for many viewers, Game of Thrones is a series about dragons. That's been a difficult place to be as a fan lately, as the show has started killing off the dragons the same way it would any other character, with both Rhaegal and Viserion now both deceased. But after watching the finale, fans all have the same question about the remaining dragon: Where is Drogon going? Warning: Spoilers for Game of Thrones Season 8 follow.

In the end, it's hard to say where Drogon went off too. Dragons are strange beasts, mysterious. No one knows quite where they came from, other than the mountain range of the Fourteen Fires in Valyrian, a mountain range that is now gone. No one knows where the eggs that still exist in the world came from, and no one really knows how to hatch them either.

That's why Daenerys' moniker of Mother of Dragons was such a big deal. There hadn't been dragons in the world for 150 years, and now there were three, all hatched by the same woman.

Now she, and two of those dragons, are dead. Drogon is the only survivor.

So where did Drogon go? The fact is, no one knows. One might think he would fly her body to Dragonstone, where she would lie, with him guarding her, until her corpse decayed. But with Bran now the ruler of "The Six Kingdoms," that suggests someone took over Dragonstone and rules it instead.

Another place Drogon could have taken her is the Great Grass Sea. When Daenerys took her first ride on Drogon out of Meereen at the end of Season 5, that's where they went. It is, after all, the place he was a baby dragon, and knows very well, and it would be easy to find a place to leave her or guard her, as he sees fit.

But the place most lore enthusiasts would like to believe Drogon went is old Valyria. That, after all, is the true birthplace of dragons, and the place where so many dragon masters and dragon lord rest in eternal peace. It's also a place Drogon could keep her where no one will come, for fear of the Stone Men and contracting greyscale.

In truth, no one knows where Drogon went, but if the rumors are true, he might still be on the Westerosi continent after all. As is reported in the King's Small Council towards the end of the finale, there is word Drogon has been spotted, though nowhere near King's landing. Bronn, of course, doesn't want to know where the beast has gone, but Bran looks intrigued. He even suggests he may try and find the last dragon. Does he mean to try to warg into Drogon? Or just send ravens to search the skies?

Wherever Drogon has gone, let's hope it's a place where the goats are fat, and there are no children to eat.