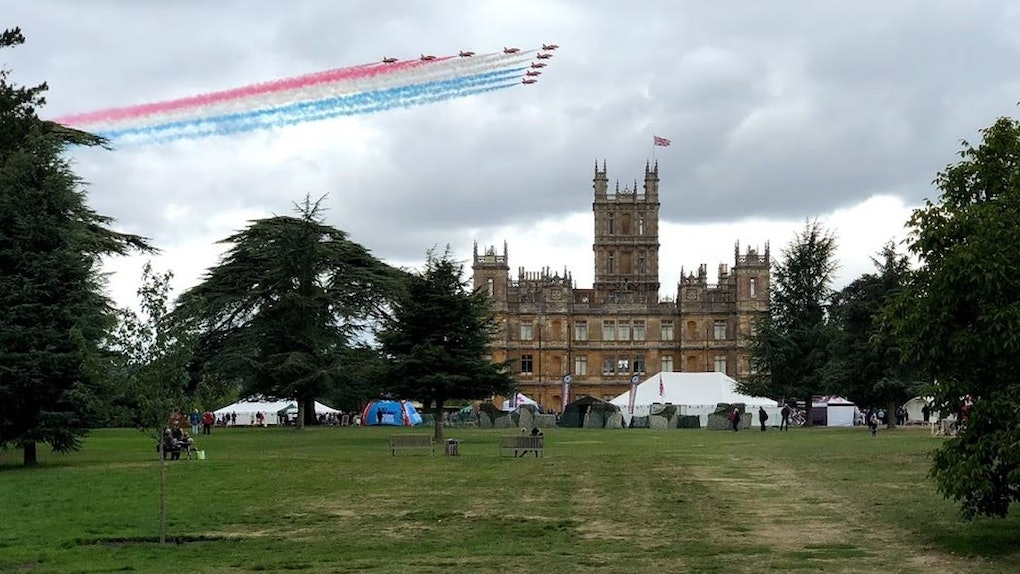 Where Is ‘Downton Abbey’ Filmed? The Castle Held A Big Event Before Movie Production

The story of Downton Abbey is nominally one about the Earl of Grantham, Robert Crawley, and his family, which consist of three daughters. Over the course of six seasons, and now a forthcoming movie, we trace the lives and loves of these characters. But the most essential role is the one who was there before any of the Crawley family existed and will outlive them when they are gone, the Abbey itself. Where is Downton Abbey filmed? The real-life estate is called Highclere Castle, and during the summer months, it's open for tours.

Highclere Castle has a long history, which the tour of the indoors outlines. There's been a house in this spot since the 9th century. For a long time, it was known as Highclere House. It was remodeled into the building fans know today in the 1840s, and the red brick was refaced with the iconic Bath limestone and redubbed a "Castle" by the 3rd Earl of Carnarvon, the owner at the time.

The building has been associated with King Tut, as it was the 5th Earl of Carnarvon who funded the tomb's discovery, and there's an exhibit of Egyptian artifacts which can be seen by visitors during the tourist season. It is also associated with Buckingham Palace, due to the Queen's close friendship with the 7th Earl of Carnarvon. The tour I went on took us to both locations. This is an extra treat for Downton fans, since the Christmas special with Lady Rose recreates Buckingham's iconic grand staircase and throne room.

But the Castle's most significant association is with the era of World War I. In Downton Abbey, the building is turned into a hospital by the Granthams as part of the war effort. This is true of the real building too. Since then, they have been part of supporting the armed forces. That's why the final event held at the castle this year before it closed for filming the Downton movie (and for the tourist season) was "Heroes at Highclere," a tribute to those who served in World War I.

This year marks the centennial since the end of the war, which drew to a close in November of 2018. Highclere wanted to be part of marking this occasion and partnered with charities Combat Stress and TAPS for veterans, as well as Médecins Sans Frontières to help highlight their work in war-torn areas.

The work with TAPS also brought over America veterans from WWII for this event. Highclere's grounds was, unfortunately, the site of a significant crash of allied aircraft, including a B-17 Flying Fortress, and a statue was unveiled commemorating their lives. It is set on the grounds partway toward the "Heaven's Gate" folly, not far from the walled off area known as the Secret Garden.

The event was one of the largest the castle had put on in quite some time. The visitors were an eclectic mix of Egyptian enthusiasts, military veterans and of course, Downton fans, many of which showed up in period costume, fitting in perfectly with the World War I era theme.

The Downton Abbey movie is expected to arrive in late 2019. Highclere Castle will reopen to guests for the summer tourist season next year.

More like this
Where Is The 2021 Oscars Ceremony Being Filmed? The Location Is So Different
By Umber Bhatti
Here's How To Stream 'Nomadland' So You Can Finally Get The Hype
By Rachel Varina
Is Netflix Making A 'To All The Boys' Spinoff Series About Kitty? Here's The Tea
By Rachel Varina
Stay up to date