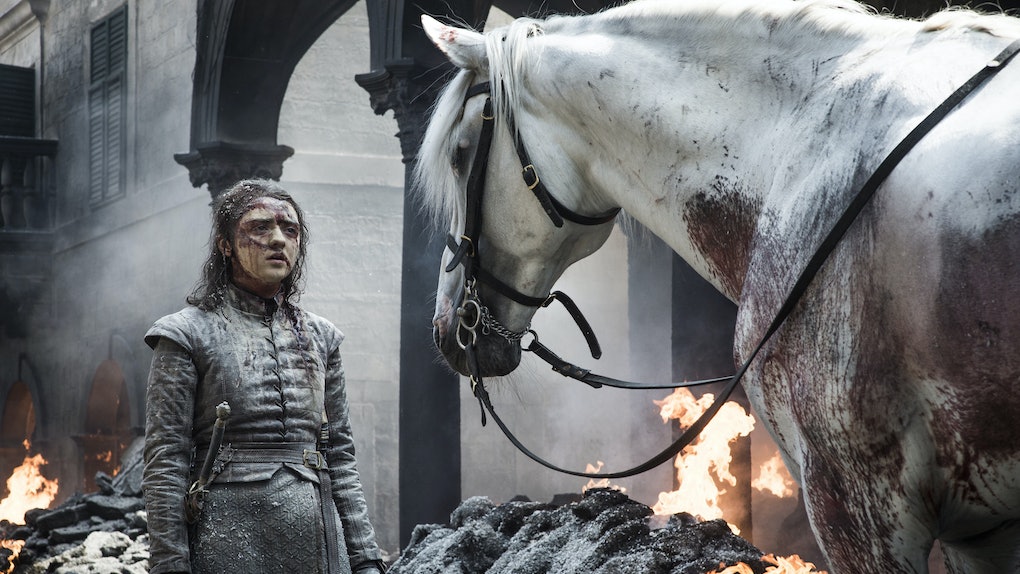 Where Is Arya Going At The End Of 'Game Of Thrones'? Fans Are All Asking The Same Question

Arya's survival in Game of Thrones' penultimate episode seemed nothing short of miraculous. (So extraordinary in fact, entire fan theories sprang up explaining how the white horse was actually proof she was dead.) But while wild speculation ran rampant, the trailer for next week showed the Stark family assassin in King's Landing and ready to add to her list. Obviously, the show must have kept her alive for a reason, and that reason was to kill Daenerys. Not so fast. Where is Arya going? Warning: Spoilers for Game of Thrones Season 8 follow.

In the end, Arya didn't kill Daenerys, however much she might have liked to after the sheer scale of destruction the Mother of Dragons brought upon King's Landing. Her list ended with the Night King, and it would stay that way. The Hound was right, living only for vengeance takes a toll on your soul. If he could pass on any fatherly advice to his charge, after all their time on the road together, it was to learn from his life, and not make the same mistake.

Arya needed to stop killing people. She was saved from breaking that promise and killing Daenerys, but staying on Westeros would make keeping that promise hard. Nor could she go back to Essos, as the House of Black and White would most likely want a word. In the end, she picked the third option.

It's a piece of lore that book fans have been discussing for years, the question "What's West of Westeros"? In fact, some have gone so far as to go "flat earth" on the subject (or perhaps "Flat Planetos" is a better what of putting it.) If there is no West of Westeros, then is the planet a flat disc?

It is not though. In the companion book to the series, "the World of Ice and Fire," there are tales of people who sailed West of Westeros and then their boats turned up again east of Essos, proving the world is round, but suggesting there is no lost continent in between the two countries, no "America" for anyone to find. That makes for a pretty large ocean to cross, one that could be deadly, if no one packs enough supplies.

This does not mean Arya is sailing to her death or anything, to be sure. If anyone is equipped to find an new continent or even a spare set of islands between the two continents, it's the Stark daughter. It also makes for an excellent idea for fan fiction spinoffs: "Arya's Adventures West of Westeros." After all, if there's one person who can take care of herself, it's Arya.

The final scene of Arya on that boat, getting ready to sail away on a brand new adventure may have been the most beautiful ending she possibly could have landed. An angry, scared little girl no more, an assassin who is done with her killing days, a highborn woman, who knows what she wants and is ready to take it, Arya Stark clearly has the backing and the money of her sister Sansa, Queen in the North, and she's ready to expand those horizons.