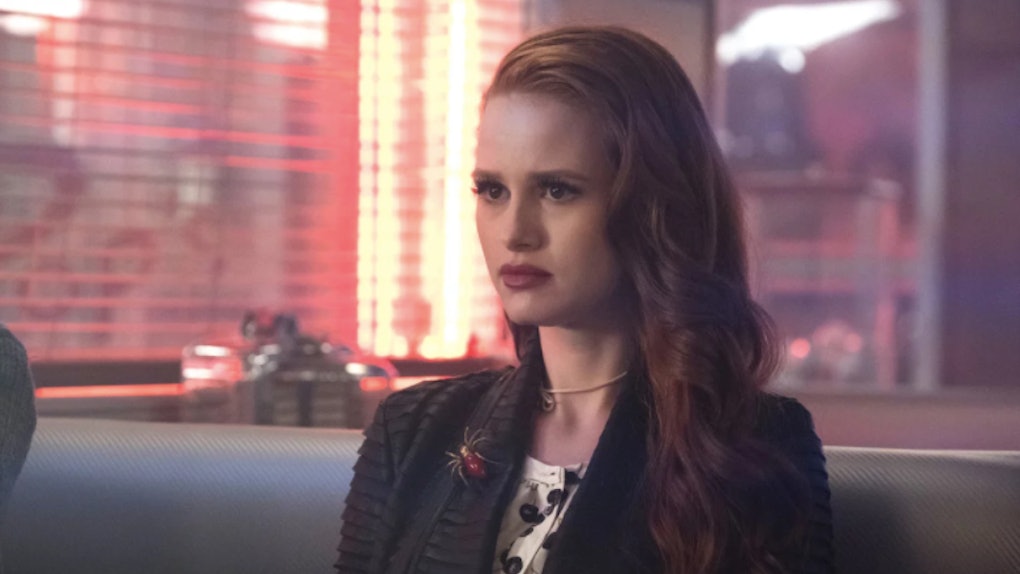 When Will The Black Hood Be Revealed On 'Riverdale'? Madelaine Petsch Says It's Happening Soon

Any fan of Riverdale has had one question on their mind since Season 2 premiered, and that is: Who is the Black Hood? Aside from knowing this mystery person has green eyes and terrible aim, we don't know much about who could possibly be behind the very DIY ski mask and it's been driving us nuts. Luckily, though, after weeks of guessing and anticipating, it looks like Riverdale will reveal who the Black Hood is very soon.

I didn’t guess it. When I read it, it shocked me, but you won’t have to wait much longer. A couple more episodes and the mystery will be revealed.

A COUPLE MORE EPISODES, you say??? I guess that's doable, right? I mean, we did wait 13 full episodes to figure out who killed Jason Blossom last year, and the payoff was definitely worth it there, so I guess it won't kill us to wait a ~little~ longer this season. The only thing that sucks is that Riverdale will probably pull some sh*t and reveal the identity right before the winter finale, leaving us to wonder what's next until the show returns after the holidays. Typical.

Unlike his costar Madelaine Petsch, KJ Apa — the actor who plays Archie — was not surprised by the Black Hood's identity. In the same interview as Petsch, Apa says, "I already knew. I guessed it," before continuing with, "But everything is very…it’s hard to say."

Apa might not have been surprised, but I'm sure our jaws will drop when we learn the the Black Hood's true identity. Let's face it, Riverdale has a flair for dramatic surprises, so we're definitely in for a shock when this doozy of a mystery is finally revealed — especially since literally everyone is a suspect right now.

Earlier this year, ahead of the Season 2 premiere, we were promised a crazy, dark ride by the show's creators and actors; indeed, one of the show's executive producers, Roberto Aguirre-Sacasa, recently spoke with Variety about the show's circumstances in the second season and the "darker journey" all of the characters are on, saying,

So far, with each episode, the show has definitely gotten darker, but — believe it or not — it stands to get much more suspenseful and thrilling in the coming weeks as we see more of the Black Hood's sinister plan unfold and finally find out who is behind the mask.

That's no big surprise, though, since showrunner Roberto Aguirre-Sacasa promised a season driven by fear when he spoke with Entertainment Weekly, saying,

The big theme is what happens when you’re living with fear day in and day out that something terrible might happen. And how your life changes when you’re walking home from school and you see someone and you cross to the other side of the street. Or when you go to bed, you triple-check your front door to make sure it’s locked.

Hopefully Riverdale will be a bit less fearful once we find out who's behind all the attacks and dark phone calls. At this point, I'd say that's a long shot, though.

More like this
Camila Mendes’ Friendship With Lili Reinhart & Madelaine Petsch Got Stronger After Their Breakups
By Lydia Wang
These Fake 'Riverdale' Brand Names Are Even Better Than The Real Thing
By Rachel Varina
In 'Riverdale' Season 5, Toni Topaz Is The Black Superwoman Without A Cape
By Erika Hardison
Stay up to date