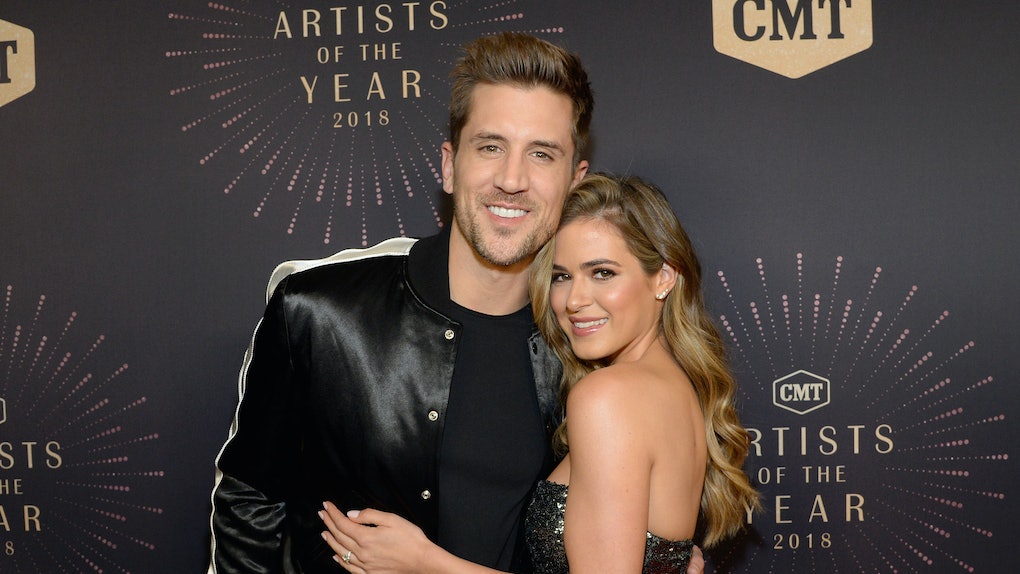 When Is Jojo Fletcher & Jordan Rodgers' Wedding? This Update Is Super Exciting

They've been engaged for years now, but when is Jojo Fletcher and Jordan Rodgers' wedding? Well, according to a recent Instagram posted by Rodgers, the day could be coming very soon. Rodgers posted a picture of himself and Fletcher with his brother Luke Rodgers and Luke's bride Aimee Wathen at their rehearsal dinner at Red Bicycle Coffee & Crepes in Nashville. He could have gone with any caption, but he decided to really get fans' engines running by including a little hint that his nuptials with Fletcher may be right around the corner.

The 30-year-old sports commentator wrote under the adorable picture, “Wedding Day for these two! Couldn’t be happier to add a sister to the family! @joelle_fletcher we are up next!”

Ah! They're next, people! They're next! Fletcher, 28, commented on her fiancé simply with two red heart emojis.

Now, of course, his caption only indicates that he and Fletcher will be the first within his family to tie the knot following his brother's wedding. It's not really that shocking, considering he's now the only of his brothers who's currently engaged (Aaron Rodgers is in a relationship with former race car driver, Danica Patrick, but the two are not engaged).

If your memory is as bad as mine, let me give you a little refresher on Fletcher's relationship with Rodgers. The two met on Fletcher's season of The Bachelorette back in 2016 and, needless to say, Rodgers won. Rodgers proposed to Fletcher and... you guessed it... she said yes!

The two have been engaged ever since. And they've made it pretty clear that they're not necessarily in a rush to make it down the aisle. In fact, during an interview with Us Weely in November of 2018, Fletcher explained that they're planning on doing things on their own timeline... which, like, can you blame them after the entire beginning of your relationship unfolded on The Bachelorette?!

“People are waiting on it, but what I have learned in life is that you can’t do anything for other people,” Fletcher told Us Weekly in the November interview. “We’re very secure and happy in our situation … It’s funny because we talk about life like we’re already married. It’s so weird. I forget that there’s that major step that’s there, something that, obviously, I can’t wait for. I can’t wait for my wedding day when it is that day.”

During the same interview, Fletcher gave a little hint as to whether or not their vows will be televised. Simply put, she's down, but she has some pretty understandable conditions.

“I would never say no, never, but I think it’s very important that, if it was a televised wedding, that it stays true and organic to us,” she told Us Weekly. “We would never do a wedding that was just filled with a bunch of Bachelor people that we don’t even know, because that’s not us. But, if we could have it the exact way that we’d want it to be, and allow people to see it as well, then I would say yes.”

Obviously, we'd all love to watch Rodgers and Fletcher walk down the aisle in our living rooms, just like we watched her accept his proposal back in 2016. But the most important thing? That they get married on their own timeline in their own way. Here's to hoping!