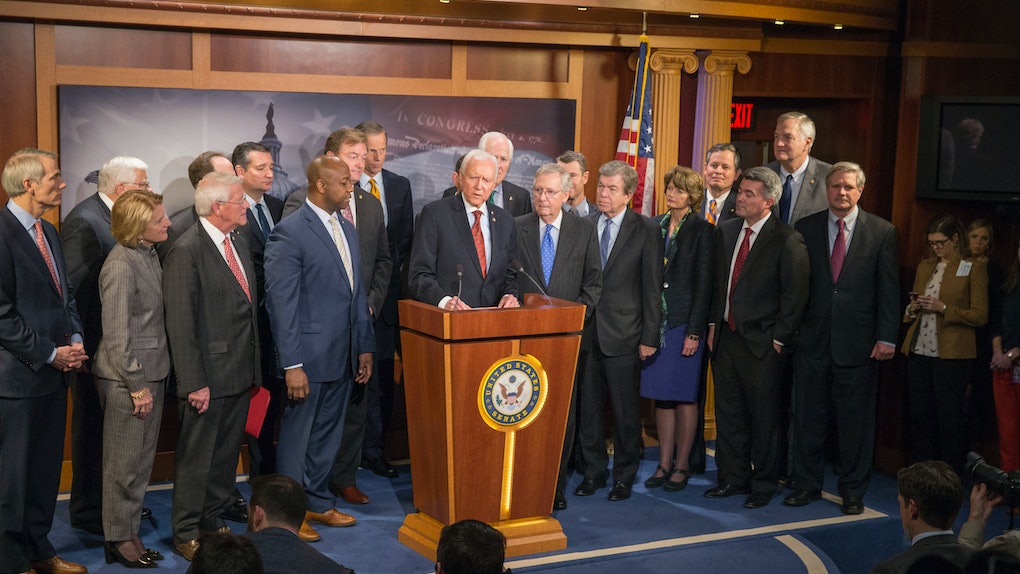 When Does The Tax Bill Go Into Effect? It'll Take Time To See Changes

The long-debated GOP tax bill was passed late Tuesday night, Dec. 19, with every Republican on the floor voting in a 51-48 victory. The new tax system is expected to reach President Donald Trump on Wednesday, Dec. 20, for approval. Congress has been divided over the Republican tax bill, as it is expected to add $1.5 trillion to the national deficit. With that being said, it's important to know when the tax bill will go into effect, and how to best prepare.

The new system will go into effect on Jan. 1, 2018, according to Politico. However, many Americans won't feel the weight of the new tax cuts until 2019, when it's time to file taxes for the previous year. Most of the 2017 tax returns you file in April 2018 will adhere to the current tax code, as well as taxes filed for people that pay quarterly taxes beginning in January.

According to the Internal Revenue Service, information about tax withholding will be released in January, meaning that the taxes taken from your paychecks could change at the beginning of February. Some of those major tax cuts that will affect employees include deducting their moving expenses, covering transportation costs for employees, and deducting for meals and entertainment.

Something that might affect employees soon is having to fill out W-4 forms again. W-4 forms typically inform employers on someone's marital status and if they have children or not, which contributes to their tax exemptions. The new bill proposes to get rid of the existing $4,050 exemption for families, spouses, and children. This means that millions of employees would need to re-sign W-4 forms in the new year, according to USAToday.

Matt Gardner, from the Institute on Taxation and Economic Policy told CNBC, "There's clearly no question that the benefits of this tax break are going to go primarily to the top 4 percent (of earners). Middle income families will be at best an after-thought," Gardner said.

The tax system stretches over a 10-year span, which means the sharpest cuts will be happening early 2019 and 2020. There's also the possibility that taxes will rise again by 2027, according to CNBC.

The bill is expected to have the most catastrophic effects on the future generation of taxpayers in the Gen X and millennial age group who will have to take on the increased national deficit. The major tax cuts that are happening will eventually have to paid back if America wants to be relieved of debt, and it will be the younger generations that have to pay the consequences, according to The Atlantic.

After passing the bill early Wednesday morning, the Senate sent it back to the House for an approval vote. President Donald Trump tweeted his plan to hold a news conference at the White House at 1 p.m. ET on Dec. 20, if the House approves the final version of the tax bill. If everything goes as planned, Jan. 1, 2018 will mark the start of a new tax system with lasting effects for Americans.