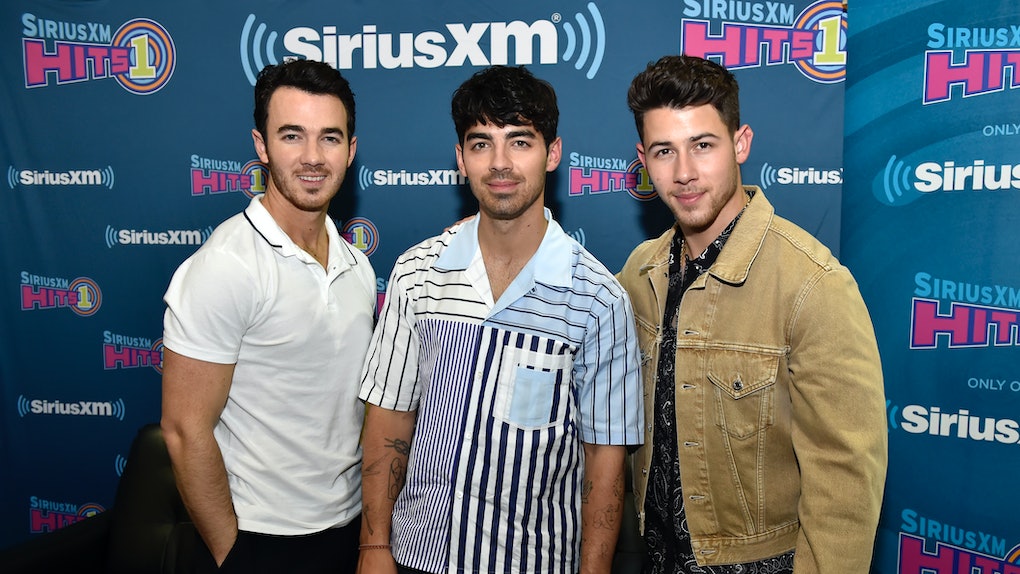 When Does The Jonas Brothers Documentary Premiere? You Won't Have To Wait For The Year 3000

I never would've thought that the Jonas Brothers could relive the glory of their Disney heyday, but 2019 has suddenly become the band's year. The Jonas Brothers officially reunited in February before ringing in March with a brand new single, and since then, Kevin, Joe, and Nick have announced an upcoming album, tour, and documentary special. If you've finally gotten tired of re-watching the Instagram videos of Joe Jonas and Sophie Turner's Vegas wedding, you now have the immersive documentary to look forward to ahead of the album's June release. When does the Jonas Brothers documentary premiere? Mark your calendars for June 4.

ICYMI, the Jonas Brothers' fifth album Happiness Begins drops on June 7, including singles "Sucker" and Cool" as well as songs meant as love letters to Joe's new bride Turner and Nick's wife Priyanka Chopra Jonas. In August, the band will then go on tour, but if you couldn't snag a ticket to a show or just feel super impatient about the album, the band's Amazon Prime documentary, Chasing Happiness, will hold you over for a few days. After all, fans have the documentary to partially thank for the band's reunion.

As Nick explained during the band's week-long stint on The Late Late Show with James Corden, the brothers began filming the documentary about a year and a half ago. Their intention for the special was to track their separate lives as adults, but filming together stirred up all the nostalgic feels for the boys. "We started to realize that there was a magic that we felt like we were missing," Nick said. "So the process was basically just [us saying], 'Why don't we give this another shot?' So we started playing a little music together and realized right away this is where we're meant to be in our lives at this moment."

The documentary is slated to focus on the band's beginnings in New Jersey and their family's early struggles. It will then segue into the Jonas Brothers' rise to fame and the road leading to their split in 2013. As the narrative reaches present day, Chasing Happiness will explain how the brothers recovered from their rocky relationship at the time of their breakup and how that contributed to the decision to work together again. We already knew Amazon makes the world go round, but it truly does run the world if it made this JoBros comeback happen.

If you loved that Disney Channel mini-series following the Jonas Brothers on tour, Chasing Happiness sounds like it'll be right up your alley. It's unclear how frequently Frankie the Bonus Jonas or the Jonas Sisters will appear in the footage, but a deep dive into the band's history is sure to please longtime fans, and the brothers seem aware of how loyal their followers are. When the project was officially announced in March 2019, the Jonas Brothers said in a statement:

Our fans are the best in the world and have shared in our journey as the Jonas Brothers and us as individuals. In releasing this documentary we wanted to make sure we partnered with an innovative platform, like Amazon, that could reach our fans around the world.

June may mean the start of summer, but it sounds like the first week will be a total celebration of the Jonas Brothers legacy. Are you feeling so cool yet?