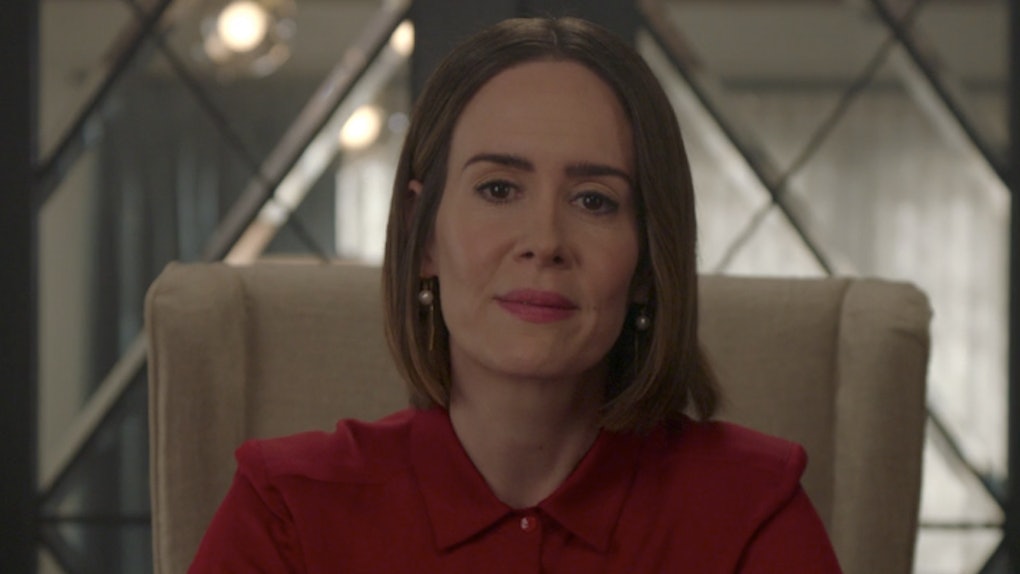 When Does 'AHS' Season 8 Premiere? Here's Everything We Know

That's right, Cult's body isn't even cold yet and we're already focusing on what sinister possibilities Ryan Murphy might have in store for the next installment of AHS. In the past, we've dealt with ghosts, witches, clowns, and human monsters, so the question is: Where can American Horror Story go next? Cult may have just ended, but that doesn't mean we can't theorize about what's to come, right?

Of course, very little is known for sure about the path that AHS Season 8 will take. Thanks to some hints dropped by Ryan Murphy and some of the show's regulars, though, we have some idea about the direction the series might go in for its next sinister chapter.

First thing's first: Let's acknowledge that the best thing about American Horror Story, Sarah Paulson, will be a part of the next season. That's right, the reason we keep coming back after all these years, despite the nightmares, is to watch Queen Sarah Paulson, and it's already been confirmed that she will be a part of Season 8. According to an interview with AdWeek, Paulson is on board to tackle whatever Ryan Murphy comes up with for his next chapter, and after seeing her as Ally in Cult, I can't wait to see what that entails.

As for what might be in store for us, Murphy himself has said that seasons 7 and 8 would start to expose a through-line connecting all the seasons. Indeed, prior to the premiere of Roanoke last fall, Murphy hinted at the show's future in an interview with The Hollywood Reporter, saying,

You’ll see [seasons starting to come together] this season, and then you’ll really see it after this season. We lay a lot of pipe, and you’ll see it explode in seasons seven and eight.

Of course, anyone who was paying attention during Cult saw tons of subtle references to past seasons, pretty much confirming they all take place in the same universe. That aside, though, Season 7 didn't do much else to connect any previous seasons, so it looks like Season 8 might be where Murphy really delivers on his promise.

In the past, the creator confirmed there will be a Murder House/Coven crossover season in the show's future, telling Entertainment Weekly, "We are going to do a season that’s a crossover between Murder House and Coven together, which is very bizarre." Whether or not we will see that crossover in Season 8 is yet to be determined.

As for next season's potential theme, Entertainment Weekly recently caught up with Sarah Paulson, and she had a few teasers for us. When asked whether she's spoken with Ryan Murphy about next season, the actress said,

I have. I can tell you absolutely nothing. He and I have had a preliminary conversation, and I can tell you that the thought of it is very exciting to me. However, I think the kind of magic of this and the beauty of it is that these ideas come to him in ways that are like flashes of fever dreams. Sometimes he’ll have a big idea. I’ve had him tell me things before that were going to be the whole thing that ultimately never turned into the season.

She continued by talking about what she hopes happens,

So what I’m saying is, I have had a conversation with him, something that is percolating. I do not think it’s been decided. I think it’s a percolating thing. It got me very excited. Whether or not I’ll actually do that or that will be the story remains to be seen. I have said before to that anything he decides to come up with, I’m always so game and on board with because it’s obviously been a wild ride for me. But there have been some preliminary conversations. I hope it’s the one I hope it is; let’s put I that way. I’ve heard more than one idea and there’s one in particular I really hope lands.

One way or the other, I'm sure Season 8 will be just as terrifying and captivating as Cult and its predecessors. One popular theory is that AHS 8 will take place during the American Revolution.

Murphy has been known to hide clues in each season about potential themes for the next season, and Cult, as Redditers have noticed, has several references to a "revolution" and a "crown," as well as an opening title sequence featuring a statue of George Washington. Of course, all of these "hints" are on brand for Cult, given its political nature, but they're still worth paying attention to — especially since, as Reddit user Musain points out, this could be the perfect stage for a Coven crossover.

Though there is no official announcement yet, we can look forward to seeing American Horror Story's eighth season premiere sometime next fall. As Murphy once told Vanity Fair, he likes to have the series finale before the holidays. the show's creator said,

I always watch that show live, and I really love it in the beginning when it’s fall, when it‘s Halloween and before Thanksgiving. And then after that, I just don‘t want blood with my Christmas ornaments. I just don’t.

So clearly we can expect a release early in the fall like we saw with Cult. Until then, I'll be over here looking for more clues regarding Season 8's theme.