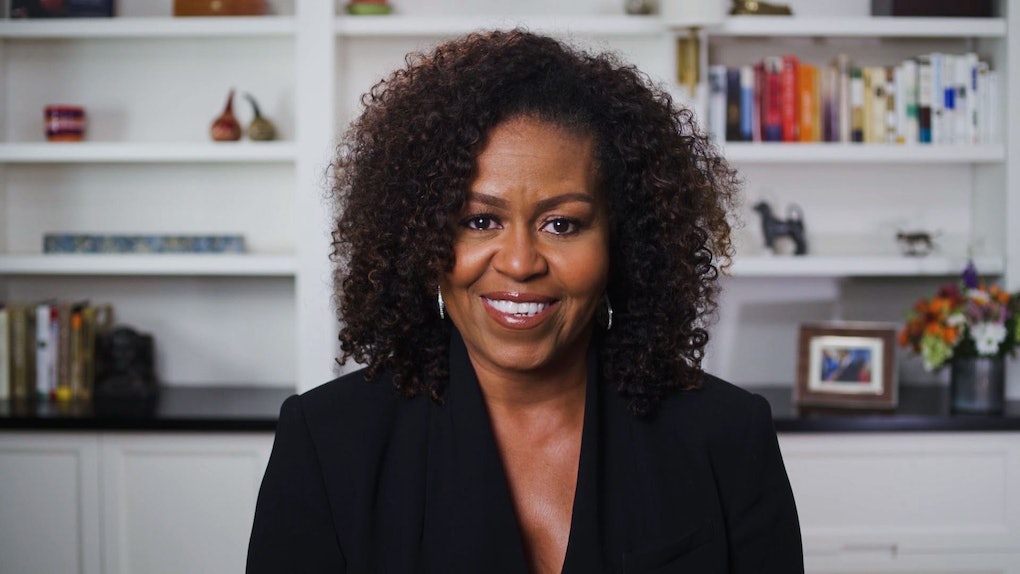 What's The Song In 'The Michelle Obama Podcast'? This Mereba Tune Has A Special Meaning

On Wednesday, July 29, former first lady Michelle Obama kicked off her highly-anticipated podcast with the inaugural episode featuring her husband, President Barack Obama. If you tuned in and were struck by the opening sequence of the episode, you might be wondering: what's the song in The Michelle Obama Podcast? Here's why the track is a fitting way to start things off.

During the first minute of the episode, Michelle Obama is heard laughing with the former POTUS and testing out her microphone. Before she gets into the action of the episode, a catchy song plays, with the lyrics: "Ooh, I'm not sorry/Stay sick cause I follow my gut/They say I was pushing my luck/Ima push me a matte all black truck." If you couldn't quite place what the tune was, here's your answer: "Black Truck" by Mereba.

Unsurprisingly, the podcast's opening song has a special meaning that's all about putting yourself out of your comfort zone and growing from that. In this first episode, Barack and Michelle both discussed their early experiences with local organizing and Michelle emphasized how getting out of their bubbles made them feel more a part of their communities.

Mereba, whose full name is Marian Mereba, explained the origins of the song during an August 2018 interview with L'Officiel. She said she was inspired to write the song, thanks to her dad and the Ethiopian community she grew up with. "So I grew up, like with a lot of first generation kids, with the stories (their parents told) of, 'You don’t know how hard I worked to be here,'" Mereba explained in the interview at the time.

Mereba's father, who was an Ethiopian immigrant, saw his dream car, a black Lexus, as a symbol signifying that he'd made it in his adopted home. "My dad always wanted this specific Lexus. He wasn’t a materialistic person, but that metaphor for him was like, 'I will have really been that person who came from Ethiopia, from nothing, and made it.' So that’s where I got the idea of the car," she said. Touching on a similar topic in the podcast, Michelle Obama mentioned how, as a young girl living on the South Side of Chicago, she thought having a station wagon meant you "made it."

Mereba also called the track an "ode" to her ancestors' strength, adding, "The matte black truck is something to me that’s really militant, like, 'You can’t f**k with me if I’m in this car,' and that’s why that particular type spoke to me. It’s like an ode to my ancestors, and the people who came before me who were strong enough to muscle through."

The meaningful song fittingly set the tone for Michelle Obama's first episode, which delves into how people can invest in their own communities, both locally and on a national level. In the episode, the Obamas also share how they first fell in love, discuss political apathy in young people, as well as how listeners can contribute to the legacy they leave behind for future generations.

The former president is just the first of many guests that'll include some of Michelle Obama's family members and friends in addition to public figures like Conan O’Brien and Michele Norris. Future episodes will be released weekly and will be available for both Premium and free Spotify members, so make sure to sign up if you haven't already to tune in.

More like this
Shelly Bell Is Making Sure Black & Brown Women Entrepreneurs Get What They're Worth
By Fatma Khaled
After Derek Chauvin's Conviction, Young Black Activists Demand True Justice
By Nylah Burton
Little Miss Flint's Activism Is All About Making Kids Like Her Feel Valued
By Ciarra Jones
Stay up to date