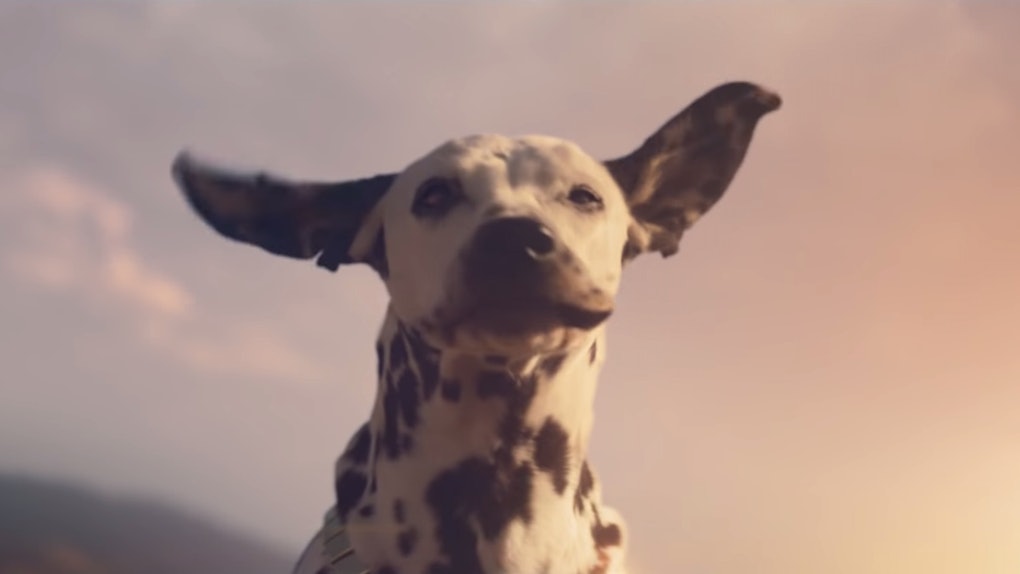 I think the award for Cutest Super Bowl Ad 2019 has already been won, guys... and we still have a week and a half until the big game. Budweiser unveiled their commercial this week for Super Bowl LIII, and it features their iconic Clydesdale horses and a Dalmatian. Can you even?! More than that, the ad also touts Budweiser's use of wind power to make their beer, and the song they use throughout the spot is so fitting. What's the song in Budweiser's 2019 Super Bowl commercial? It's one sung by none other than Bob Dylan.

In the spot, we first get a close up of a Dalmatian whose ears and mouth are flapping ever-so-adorably in the wind. We can see he's making some real speed, but doesn't seem to be running. The camera pans out, and that's when we see he's riding on the back of a carriage pulled along by the Clydesdales that's carrying Budweiser beer through a farm at sunset. Pan out even more and we can see wind turbines turning on the farm. The song that's playing in the background is Dylan's 1963 tune "Blowin' In The Wind." Kind of perfect, no?

According to AdWeek, Angie Slaughter, vice president of sustainability at Anheuser-Busch, said the company launched a big sustainability goal over a year ago. She said, "We’re committed to 100 percent of our purchased electricity coming from renewable resources by 2025." She continued, “For us, in North America, we’re halfway there, and because of that, our Budweiser brand is already at 100 percent in terms of the electricity that they use. So, it’s a great way to bring it to our consumers and teach them about what we are doing on the sustainability front.”

Some of the Bob Dylan lyrics that we hear in the spot go like this:

You don't hear them in the quick ad, but the rest of the lyrics are:

I don't know about you, but I just realized two things. 1. I really want a Dalmatian puppy, and 2. I can't wait to see this ad during the Super Bowl on Sunday, Feb. 3.

More like this
Here's Why EXO's BAEKHYUN, CHANGMO, & Raiden's "Runner" Is The Perfect T1 Theme Song – EXCLUSIVE
By Michele Mendez
I Tried Singing While Running Like Miley Cyrus & OMG, My Lungs
By Rachel Varina
Here's How To Stream BTS' 2021 'Bang Bang Con' So You Don't Miss The Concert
By Cianna Garrison
Stay up to date