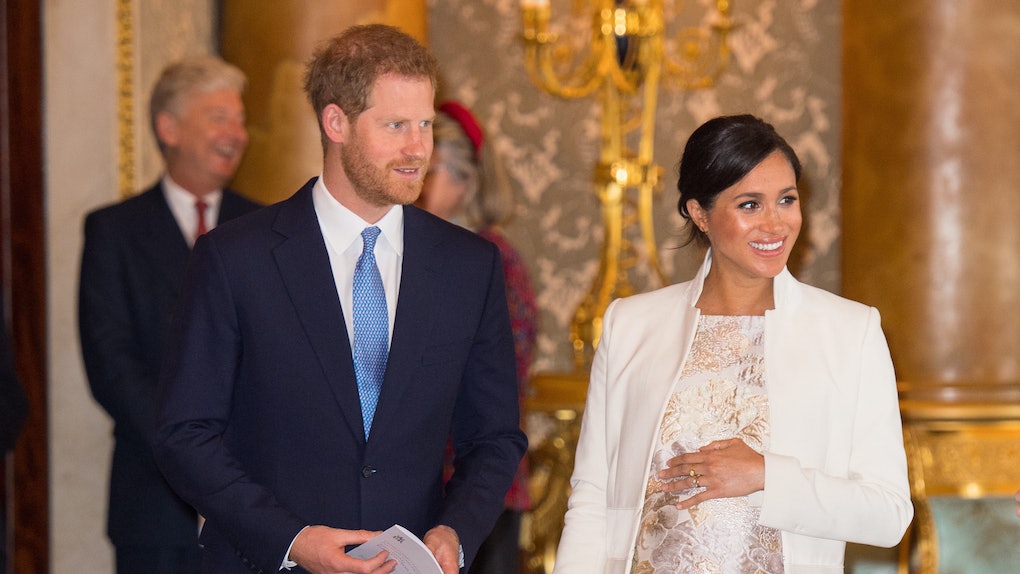 What's Meghan & Harry's Baby's Title? We Finally Know If He's A Prince Or Not

I don't know about you, but it seems to me there are a hell of a lot of rules when it comes to the royal family. The lineage to the throne is like a massive math test, and keeping up with royal traditions surrounding babies, births, and weddings is exhausting. One question people have is: What's Meghan and Harry's baby's title? Historically and technically speaking, baby Archie was not innately born as a prince.

Prince Harry and Meghan Markle's son Archie was born on May 6, and the royal pair announced the little babe's birth on Instagram with a joyous post, reading,

We are pleased to announce that Their Royal Highnesses The Duke and Duchess of Sussex welcomed their firstborn child in the early morning on May 6th, 2019. Their Royal Highnesses’ son weighs 7lbs. 3oz. The Duchess and baby are both healthy and well, and the couple thank members of the public for their shared excitement and support during this very special time in their lives.

After the announcement of his birth, fans all over the world had one big question. Would baby Archie get a title like his royal cousins George, Charlotte, and Louis? Turns out, baby Archie Harrison Mountbatten-Windsor doesn't have a title.

Back in 1917, King George V's had a decree that said only the oldest son of Prince William, the Prince of Wales, was entitled to "be styled" as His Royal Highness and a prince. However, in 2012, Queen Elizabeth II was like, "Honestly? This feels silly," and waved her magic wand to change things up. (Disclaimer: There is no proof she actually carries a wand. I just feel like it makes sense and is makes this story more fun.)

So, the Queen issued a new Letters Patent that basically says it's chill for all of Kate and William's kids to be princes and princesses. According to Town & Country, the official statement reads:

The Queen has been pleased by Letters Patent under the Great Seal of the Realm dated 31 December 2012 to declare that all the children of the eldest son of The Prince of Wales should have and enjoy the style, title and attribute of Royal Highness with the titular dignity of Prince or Princess prefixed to their Christian names or with such other titles of honour.

Prior to Archie's arrival, it was unclear if the Queen would be granting the same rule for Harry and Meghan's baby. In the instance that she did not approve the royal stylings, baby Archie would have gotten a courtesy title and be declared an Earl. Namely, he would be Earl of Dumbarton, which is Prince Harry's secondary title. (Also pretty hardcore, TBH.) But according to Victoria Murphy, a journalist specializing in the royal family, Meghan and Harry decided not to use a courtesy title for their son. So, he will not be styled as the Earl of Dumbarton after all. Murphy also tweeted, "It's worth remembering that when Prince Charles becomes king, Archie will be eligible to be styled as a Prince should Harry and Meghan wish this."

Baby Archie is also the seventh in line to throne, right behind his father, Prince Harry. I'd say fortunately for him, the likelihood of leading the UK in his lifetime is pretty small. Hopefully, that also means a somewhat easier lifestyle. (Haha.) It's not that Prince William has ever vocalized he doesn't want to be king. It just looks particularly exhausting from here! I mean, who has the time?

More like this
Meghan Markle & Prince Harry's Beef With The British Tabloids, Explained
By Brandy Robidoux
Meghan & Harry's Statement About Prince Philip's Death Is Simple, But Moving
By Sydney N. Sweeney
Prince Harry's Instagram Tribute To Prince Philip Comes Straight From The Heart
By Michele Mendez
Stay up to date