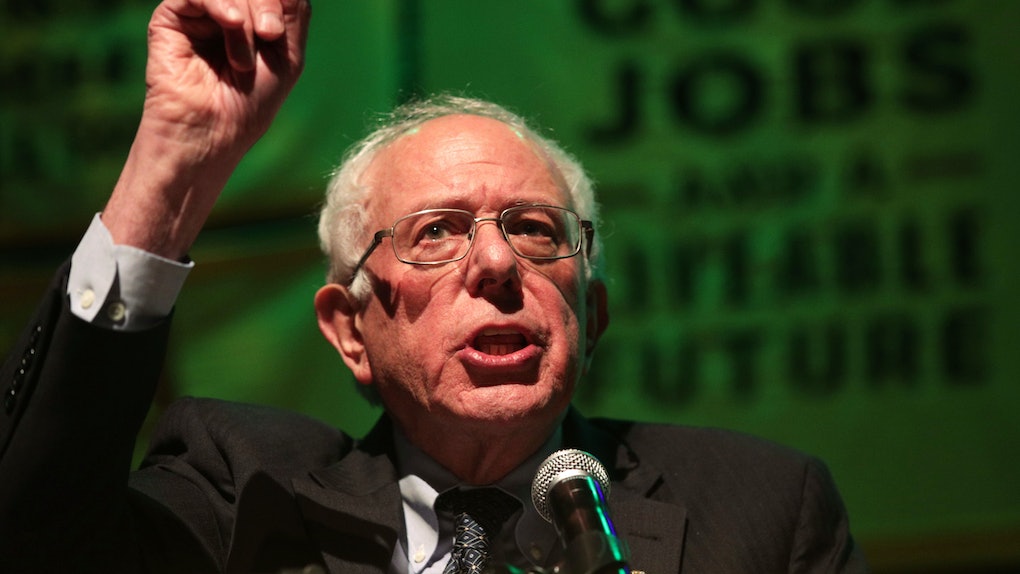 The climate and economic policy proposal known as the Green New Deal is the controversial new kid on the block, politically speaking. When Democrats, including Rep. Alexandria Ocasio-Cortez, released the proposal in February 2019, Sen. Bernie Sanders was quick to jump on board. He made appearances at Ocasio-Cortez's rallies, tweeted in support of the sweeping proposal, and hailed it as a “bold idea" during the Democratic debates. Now, farther along on the campaign trail, the presidential hopeful has shifted from lending support to practically making himself the new face of it. So, what exactly is in Bernie Sanders' Green New Deal plan?

The original Green New Deal wasn't actually a policy plan, but rather a statement of intent for future policy, laying the groundwork for candidates like Sanders to introduce formal legislation. On Aug. 22, Bernie Sanders announced a new Green New Deal that would allocate a whopping $16.3 trillion dollars to factor climate change into “virtually every area of policy.” That’s a lot of money, at least a lot more than any Democratic candidate has proposed, and he has very specific ideas about what to do with it. The plan includes phasing out non-sustainable and nuclear power, spearheading aggressive goals as an international climate change leader, and supporting fossil fuel workers in a transition to a cleaner economy. Per The New York Times, it would also commit $200 billion to supporting poorer nations dealing with climate change, and declare climate change a national emergency.

The original Green New Deal cites a United Nations report from October 2018 that listed a 2050 deadline to reach net-zero carbon emissions, releasing only the amount of carbon being absorbed by the atmosphere. By 2050, average global warming could be twice what it is now, with an average increase of 3.6F globally, and wildfires in the United States will burn twice as much forest area than they did before 2019. Sanders still stands by this date as a goal (in fact, he thinks we can reach it by 2050 at the latest), but he also takes it one step further. His plan would ensure that the United States also reaches 100% renewable energy by 2030, reducing the greenhouse emissions and air pollution that the campaign cites kills 100,000 Americans yearly.

In the next decade, the plan would bolster public transit infrastructure, invest in low- and moderate-income families or small businesses to create energy-efficient homes and buildings, and expand zero-emission transportation programs like accessible electric vehicle charging. Sanders is really excited about this: With today’s technology, the plan says, “we can sure as hell transform our energy system.”

“If the federal government was able to electrify America under FDR without computers or any of the modern technologies we have available to us today, think of what we can do today,” Sanders wrote in the proposal.

Meeting all these goals would not only save the planet, but also create jobs. In fact, the campaign makes a strong claim that this would entirely “end unemployment” with 20 million new jobs. With a clean energy economy, Sanders said, the country will need people to manufacture said cars and transportation, build energy-efficient homes, and farm sustainably.

The announcement comes hours after the release of Sanders’ extensive Workplace Democracy Plan, which champions workers’ rights and aims to double union membership in four years. Sanders builds on these promises in the Green New Deal, guaranteeing a fair transition into a clean economy with union protections, fair wages, and safe working conditions.

Sanders is already on preemptive defense for the first question he’ll have to answer from Republican critics and Democrat opponents alike: How is he going to pay for all this? According to his Green New Deal, the $16.3 trillion plan will “pay for itself.” Fossil fuel industries will be held accountable to pay for their pollution via fees and taxes, wealthy Americans and large companies will pay more, and of course, all the taxes generated from the 20 million new jobs.

That’s pretty radical. Not only does all his funding come from federal dollars, but the Green New Deal’s price tag is the heftiest we’ve seen in 2020 candidates. Even Gov. Jay Inslee, who made climate change the cornerstone of his campaign before dropping out of the race on Aug. 21, touted just a $9 trillion investment plan. Sen. Kirsten Gillibrand plans to mobilize $10 trillion, former Rep. Beto O’Rourke $5 trillion, and former Vice President Joe Biden $5 trillion.

The Green New Deal is timed impeccably: On Aug. 22, the Democratic National Committee will vote on whether to hold a primary debate solely about climate change. (Ocasio-Cortez thinks it’s a good idea.) Sanders’ announcement is a full package of everything Sanders has already stood for, but now it’s official, in clear, bold print. The stakes are getting higher and he’s stepping it up, and when the critics come for him, he says he is ready to “welcome their hatred.”

With climate change breathing hard down humanity's neck, Sanders surely won't be the only one to start planning. Here's hoping the plans are all good ones.

More like this
These Tweets & Memes About Matt Gaetz's Venmo All Make The Same Joke
By Cianna Garrison
The More Contagious B-117 COVID Variant Is Now The Most Common Strain In The U.S.
By Rhyma Castillo
What's In Kellogg's & GLAAD's Together With Pride Cereal? Expect Berry Flavors
By Daffany Chan
Stay up to date