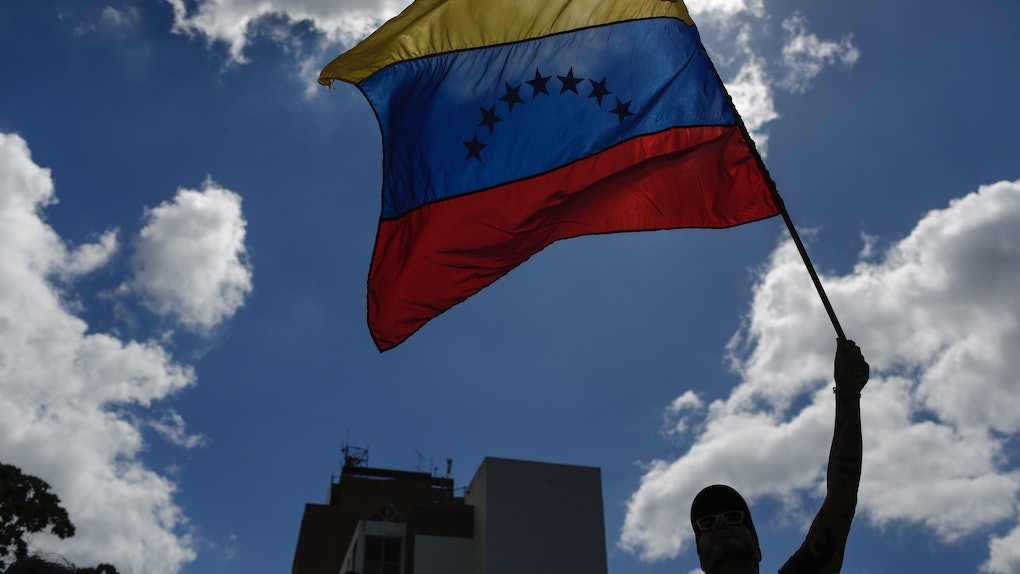 What's Happening In Venezuela? The Trump Administration Is In A New Showdown

While there has been more than enough going on in the United States to keep up with, there's been plenty more drama unfolding around the world. One country in particular has captured everyone's attention —including President Donald Trump's — as some major political upheaval is shaking out in South America. So if you haven't caught up on the latest dramatic twists abroad, here's what's happening in Venezuela, because it's causing some international diplomatic showdowns right now.

On Jan. 10, Venezuelan President Nicolas Maduro was sworn in for his second six-year term in office. But he didn't make it more than two weeks without a major hiccup thanks to controversy around the election, which was boycotted by the opposition and widely seen as invalid. Amid nationwide protests on Wednesday, Jan. 23, opposition leader Juan Guaidó, the newly elected leader of the National Assembly, declared himself the interim president by taking the oath of office during the rally and defying Maduro in the process. He was immediately met with backing by international allies, including the United States.

Supporting Guaidó, key members of Trump's administration announced last week they were officially recognizing the opposition leader as the rightful interim president of the country, denouncing Maduro as a dictator who had forged a second term in office by ill-gotten means. The gesture by U.S. officials was echoed by numerous other countries like the United Kingdom, Germany, France, and Spain which promised to back Guaidó as the acting president if Maduro didn't call for a new election within a week. Russia and China however, have spoken out against the U.S. and warned it not to intervene militarily in Venezuelan politics, with Russia backing Maduro's regime.

U.S. Vice President Mike Pence spoke out on the situation, calling Maduro "a dictator with no legitimate claim to power." Trump himself also supported the opposition leader: "The people of Venezuela have courageously spoken out against Maduro and his regime and demanded freedom and the rule of law," Trump said in a statement Jan. 23, promising "to use the full weight of United States economic and diplomatic power to press for the restoration of Venezuelan democracy." And so far, he's made good on that promise.

In a White House press briefing on Monday, Jan. 28, Treasury Secretary Steve Mnuchin announced sanctions against state-owned oil in the country, effectively choking off billions of dollars of exports. The U.S. has also given Guaidó control over some U.S.-held financial assets, the State Department confirmed on Tuesday.

As to what led us here, Venezuelans have been suffering in the last four years under Maduro's leadership, and the situation has amounted to a humanitarian crisis, according to the Center for Strategic International Studies (CSIS). Inflation has been skyrocketing to 40,000 percent annually, meaning that citizens' money is simply not worth as much. The government, too, has allegedly altered the food supply, "effectively using food as a political tool to manipulate and control the Venezuelan population," CSIS writes. The situation has gotten so bad that it's been called the "Maduro diet," with Venezuelans losing an average of 24 pounds and some 300,000 children at risk of malnutrition, per CSIS. State officials, meanwhile, have insisted that there is no crisis, per The Washington Post.

But for now, it's unclear what will happen with Maduro and Guaidó, and at least temporarily, the country remains with, essentially, two men insisting they're the president. While the U.S. has attempted to give Guaidó fiscal power, as of now, Maduro still has the backing of the military, per the Associated Press, and Forbes predicts he will stay in power through the year. Meanwhile, the top Venezuelan prosecutor asked the country's Supreme Court to ban Guaidó from leaving the country as an investigation into alleged anti-government activity is underway, per the AP. The prosecutor, Tarek William Saab, did not specify what crimes Guaidó was being investigated for. For his part, the opposition leader said that he was fully aware of "the threat of persecution."

In response to the shakeup, Bloomberg is reporting that Maduro has also cut off Venezuelans' access to information, putting chokeholds on the internet, social media, and news.

It's not known whether the diplomatic or opposition's pressure will be enough to oust Maduro, especially while he hold the loyalty of the military. But the situation has been evolving at a head-spinning pace, so stay tuned for more.