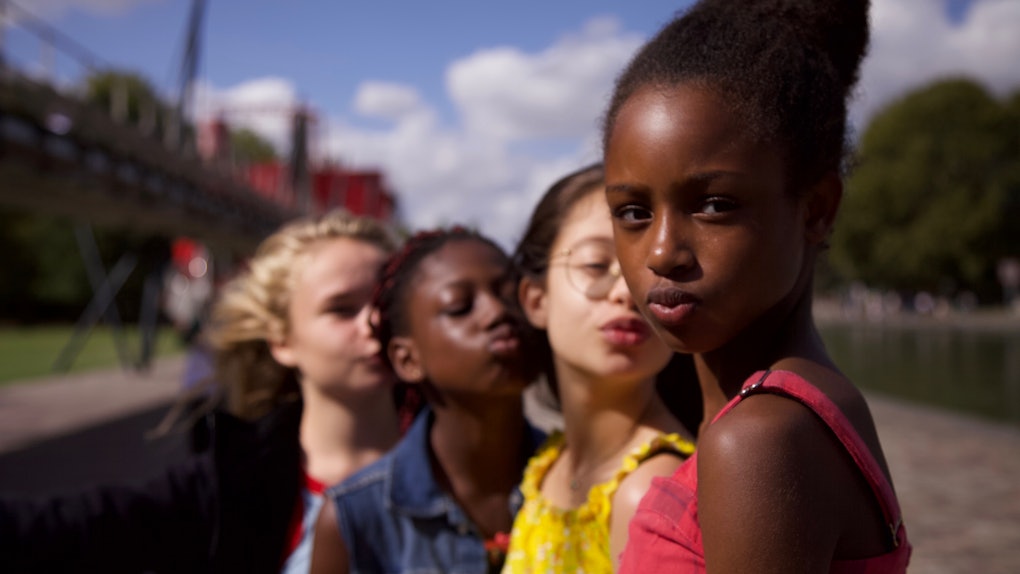 What's Going On With 'Cuties' & Netflix? The Controversy Is Divisive

They say all publicity is good publicity, but for some controversies, that's not necessarily true. Cuties, which just arrived on Netflix in September, is a perfect example. The French film debuted back in January 2020 at the Sundance Film Festival and took home the Generation Prize. Described as a "coming of age" tale, the film was praised by reviewers for its ambition, though many lamented its lack of subtlety. But when Netflix began promoting the film's arrival on streaming, there was an uproar. So, what's going on with Cuties and Netflix? It seems to be a cautionary tale about marketing choices.

Cuties (French title Mignonnes) stars Fathia Youssouf as 11-year-old Amy, a Senegalese immigrant who has just moved into a housing project in one of lower-income parts of Paris. Her mother (played by Maïmouna Gueye) is an obedient and dutiful wife and Muslim woman, raising three kids and attempting to impress modest values upon her daughter. When Amy's dad announces he's bringing home a second wife, it throws the household into emotional upheaval.

Moreover, there's another life outside her front door, as Amy discovers when she sees her neighbor, Angelica (Médina El Aidi-Azouni), dancing in the laundry room. Angelica and her friends, who call themselves "The Cuties," are committed to starting a dance troupe, with Amy soon eager to join their clique, exploring the freedom of a different, wilder lifestyle.

As a film, this sounds relatively harmless, a universal coming-of-age story of figuring out who you are, set within the rarely-shown working-class Islamic populations in Europe. The problem came when Netflix put out a new poster for the film.

The original French poster showed the "Cuties" clique in Paris' streets, returning home from shopping. The Netflix one was far more provocative, with an airbrushed-looking image of the girls in their dance costumes on stage, looking ready to hit the beat.

Further, the new synopsis put on Netflix had less emphasis on the coming-of-age aspects and more on the dancing:

Amy, 11, becomes fascinated with a twerking dance crew. Hoping to join them, she starts to explore her femininity, defying her family’s traditions.

For many who had not seen the movie, it seemed like Netflix was promoting a film that sexualized children. Change.org petitions followed, demanding the film be removed or encouraging people to cancel their Netflix subscriptions.

Those who have seen the film have said the movie was nothing like the provocative marketing, but rather it's a film about girls struggling with these messages being impressed upon them at a young age. Speaking to ScreenDaily, director Maïmouna Doucouré explained:

[T]he work grew out a desire to explore what it means to approach womanhood between two cultures as well as the wider theme of the hyper-sexualization of youngsters in modern society.

Netflix attempted to fix the situation, replacing the poster and synopsis with ones that reflected this as a story of young female friendships. The streamer also tweeted an apology, stating the marketing had profoundly misrepresented the film's message. Netflix co-CEO Ted Sarandos personally apologized to Doucouré after she began receiving death threats.

Netflix has not bowed to the pressure to pull Cuties, despite #CancelNetflix trending on Twitter for the majority of the day on Sept. 10. The film is streaming now, giving viewers a chance to judge for themselves.

More like this
Is Netflix Making A 'To All The Boys' Spinoff Series About Kitty? Here's The Tea
By Rachel Varina
10 Rainy Day Movies To Watch On Netflix That Are Perfect To Pass The Time
By Kristen Perrone and Lexi Williams
'He's All That': Premiere Date, Cast, Trailer, Filming News, & More
By Dylan Kickham
Stay up to date