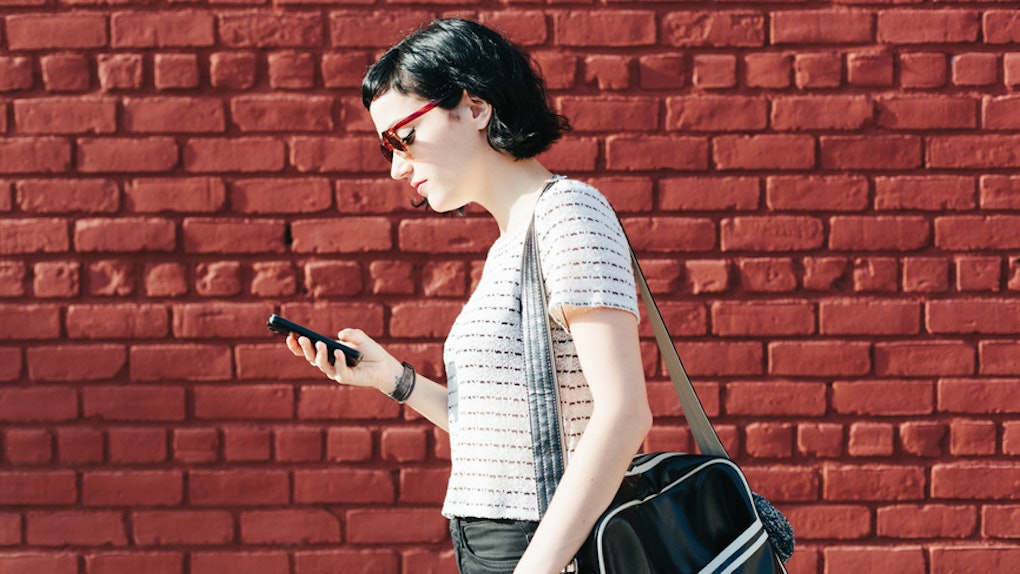 Welcome to the 21st century, where instead of driving flying cars and hiring robots for housekeepers, it's humans who are controlled by pieces of mobile machinery. Especially for millennials, smartphones have become an actual lifeline, offering us practically unlimited access to our friends, family, and breaking news stories. In a lot of ways, technology is great, but the obsession with smartphones has gotten a little out of hand, which can inevitably leave you wondering what your phone does to your brain and how it affects you over time.

It sounds silly, but "nomophobia" (no mobile phone phobia) is a legitimate fear. According to new research presented at the annual meeting of the Radiological Society of North America, it was found that a cringeworthy 46 percent of Americans believe they cannot live without their smartphones. I'm sorry, come again?

Now, this isn’t to say everyone who has a tendency to fiddle with their phones should be checking into technological rehab. There’s a clear difference between being unable to function without having your phone within arm’s reach, and simply using the device more than others. But there’s really no denying the fact that our generation is obsessed with uploading the perfect photo and caption to Instagram, refreshing Facebook every few hours, monitoring our health, and even tracking our menstrual cycles via cellular device. In that sense, using our phones in every possible aspect of life has absolutely become an obsession.

But this fascination with your smartphone could be negatively affecting your brain.

The new study, performed by the Pew Research Center, evaluated 38 young adults, half of whom had been diagnosed with internet or smartphone addiction. Science Daily reports that professor of neurology and research lead Hyung Suk Seo, M.D. and his team “used magnetic resonance spectroscopy (MRS) to gain unique insight into the brains of smartphone- and internet-addicted teenagers” through a series of tests and surveys. The goal was to determine just how severe their dependence was, based on how frequent exposure to their phones and the internet affected their brains and, as a result, their mental health.

Spoiler: It doesn't look good for the rest of us. According to Dr. Seo, participants who were proven to be addicted to their phones were more likely to experience depression, anxiety, insomnia, and impulsivity.

Here's how it works: There are two types of neurotransmitters discussed in the study. One is called GABA, which interrupts and slows the neurons of the brain, and the other is glutamate-glutamine, which encourages the easy flow of brain signals. Too much phone usage can spike levels of GABA in the brain, which, according to assistant professor of human computer interaction Caglar Yildirim, "results in poorer attention and control." In other words, the more you use your phone, the more likely it is that you'll be unable to stay on-task or present in other aspects of daily life.

There's even an online test to find out how reliant you are on your phone, if you're curious.

In 2015, Yildirim created a 20-question questionnaire that measures just how attached you are to your cell phone based on your answers. For every question, you're instructed to rate your answer on a scale from one to seven. The higher your score, the more dependent you are on your phone.

The questions center around cell phone usage, and how you might feel in a situation where you're unable to use your device. Though statements like "Running out of battery in my smartphone would scare me," and "If I were to run out of credits or hit my monthly data limit, I would panic" sound dramatic, the end result is telling. A score that falls between 20 and 99 is noted as "absent to moderate obsession," while a score between 100 and 200 could mean that your cell phone usage is negatively affecting your daily life.

There are studies that show those who score high on the test tend to avoid face-to-face interactions, have high levels of social anxiety and maybe even depression.

It might affect your ability to work or study, because you want to be connected to your smartphone all the time.

The best way to detach from your cell phone is simple: Stop using it so much.

It’s been 25 years since British engineer Neil Papworth sent the first text message via computer to then-director of Vodafone Richard Jarvis’s mobile device. Needless to say, we’ve come a long way since the era when cell phones could only receive, not send, a single text, and it’s kind of up in the air whether or not these technological advances are benefiting or hurting us.

It’s been said time and time again that too much of anything is never good, and that includes scrolling through Instagram and responding to group messages as soon as your phone pings. The solution is easy: Take a step back.

Granted, in a world that figuratively and literally revolves around social media and smartphone apps, it can be difficult to grasp the idea of going a few hours, let alone days, without them. But, trust me guys, there was a time before cell phones even existed at all, and people survived. So yes, you can, too.

I know myself, and I'm definitely borderline, if not totally obsessed with my cell phone. It's become almost instinctual to unlock my device and mindlessly scroll through Instagram or Pinterest, and sometimes it doesn't even feel like a conscious effort. In an attempt to dial back, I've started taking baby steps, like leaving my phone at home when I go grocery shopping or out to eat with my husband, or leaving my phone in my bedroom for the night after 6 p.m.

Look, no one's saying you have to give up your cell phone altogether. Let's be honest, in this day and age, it's almost impossible to disconnect entirely anyway. Plus, there are a lot of benefits to owning a smartphone, like the fact that you're able to stay up-to-date on current events in real time, and can get in touch with loved ones during an emergency. However, we don't need to be on social media 24/7, and that text message from your best friend asking about plans for Friday on Monday can wait. Try disconnecting for a few hours at a time, and give your brain a much-needed break.