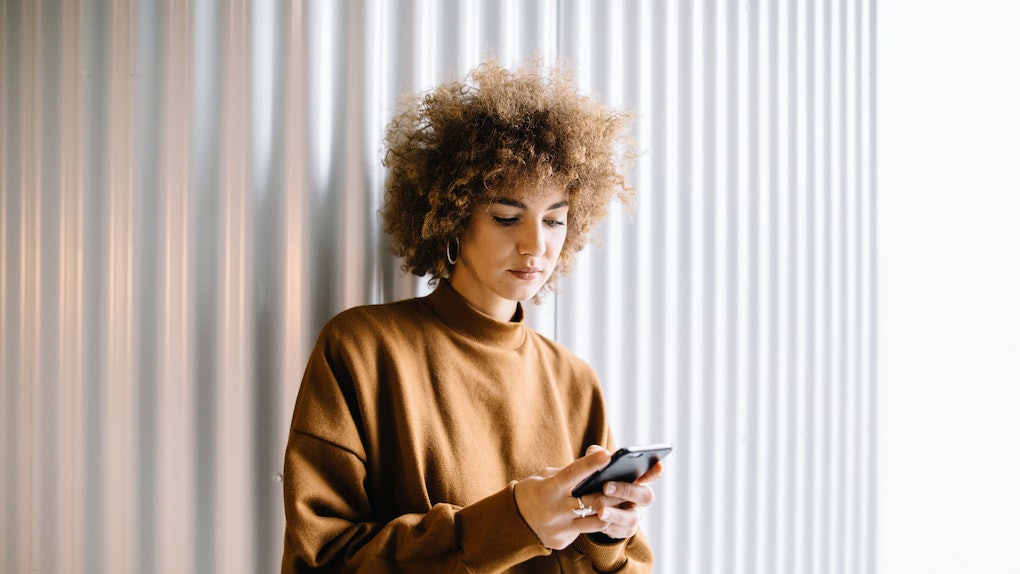 What To Do When Your Crush Doesn't Text Back, Because It Can Be Stressful

You've had your eye on that cutie from the coffee shop for a while. You finally work up the courage to ask for their number, and your friends could not be prouder. After gathering advice from your six BFFs, you finally decide on the perfect opening text: "Hey, how's it going?" Unfortunately, everything we do comes with risks (especially watching This Is Us — somehow, I know I'll cry, and I watch it every week anyway). Your crush hasn't responded (could Mercury still be in retrograde??), and you're left wondering what do do when your crush doesn't text back.

Fortunately, not hearing back in the first few hours doesn't mean it's over for you and your new crush. "If your crush is out of town or spending time with parents or their kids, and you don’t get a text back, this is because they’re wrapped up with family," Relationship expert April Masini tells Elite Daily. "It’s not you. You’ll hear back when they’re back in town." So, be patient if you don't hear from them right away — we're all busy, and they could definitely be planning on getting to it. If they're someone you don't know very well, you also might not yet be used to their texting style. So, give it time before giving up.

Experts also say that it's OK to text a second time — contrary to popular belief, people actually do miss texts, especially with how many notifications we all get. However, after two times, it is possible that you're being ghosted. "If you’ve texted your crush twice, over the course of three days, and you haven’t heard back, you’ve been ghosted. Three days is enough time for someone who’s living a normal life, to get back to you if they want to," Masini says. Cut them some slack if they don't respond at first, but after three days, it might be time to move on. Similarly, if you see them updating their social media and not responding to you after several days, they might not plan on responding.

You also want to take into account any information you have about your crush — this can inform why they're not texting you back. For example, they might be afraid to respond. "Fearful people look for escape hatches," Masini says. "Ghosting is such a hatch. So, if you find that someone you’re crushing on is a fearful person, you have a better chance of being ghosted by them if things don’t work out." This means that maybe you need to get to know them better in person before trying to make a move on them — they need time to trust you before they're ready to make plans.

Similarly, if you've gone out a few times and don't hear back, they might be unable to respond. "It’s something that people do when they don’t have the solidity of character to face another person that they are going to disappoint — so if you sense immaturity in a crush, buckle up," Masini says. If you know your crush is afraid of relationships or not mature enough for one, then keep in mind that they might be less likely to text back, and it has nothing to do with you.

The good news is that even if your crush isn't responding or you are being ghosted, you'll recover. "Ghosting stings because it’s rejection without any grace," Masini says. "But if you try to understand that the person who ghosted you does not have the relationship tools to say goodbye, or he or she doesn’t have the relationship tools to make a relationship work, then, basically, you’ve dodged a bullet." You wouldn't want a partner who can't have the hard conversations, so you're lucky this person isn't responding — even if it hurts in the moment. And don't forget to rely on your support system for help. "Laugh about it with your friends and families," Masini says. "A lot of the pain of being ghosted comes from shame. Tell your friends so you can all commiserate, share similar experiences, and laugh about life." Chances are, they've been ghosted too, and they can be there to help you through it.

Crushes can be exciting, but also unnerving. The important thing to remember is that a lack of response is never a reflection on you: Some people just aren't able to send difficult text messages, aren't in a place to date, or are honestly just bad at their phones (not me, though — I have Apple screen-time statistics warning me every week just how good I am at being on my phone). If your crush isn't texting you back, know that you deserve someone who does respond, and you will find them. In the meantime, your friends are there to help you get over it.