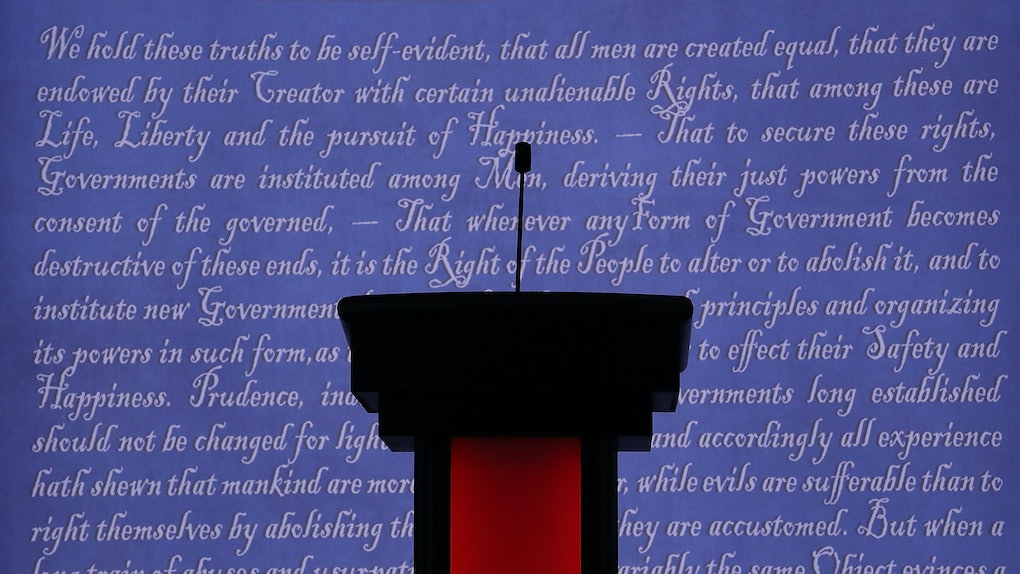 What Time Are The First Democratic Debates For 2020? They're Coming Up Quickly

The 2020 presidential election will be here before we know it, and with such a full roster of candidates, it's sure to be quite a showdown. The upcoming election is on everyone's minds, and you might be asking yourself "When are the first Democratic debates for 2020?" They're coming up very quickly.

On Friday, June 14, CNN announced that the first 2020 Democratic debates will take place on Wednesday, June 26, and Thursday, June 27, starting at 9 p.m. ET both nights. Seeing as there are more than 20 Democrats currently running in the 2020 presidential election, the debates will be split between two nights with 10 candidates appearing in each debate. The June 26 debate will feature Massachusetts Sen. Elizabeth Warren, New Jersey Sen. Corey Booker, former Texas Rep. Beto O'Rourke, and others. The second debate on June 27 will feature former Vice President Joe Biden, Vermont Sen. Bernie Sanders, California Sen. Kamala Harris, and other Democratic candidates. The debates will take place in Miami, Florida, and you can watch them on NBC, MSNBC and Telemundo.

Those are just a few names of the 20 presidential candidates taking the stage next week, and there's no doubt that each individual will have a lot to say about the upcoming election. Since throwing their hat into the ring, many candidates have already hit the road hosting campaign rallies and speaking events, but this first round of presidential debates is one of the most important events yet.

Even though presidential debates attract a lot of attention in general, June 27 is likely to catch the attention of the public since Biden, Sanders, Harris, and Buttigieg — who have been named some of the frontrunners of the election — will be going head to head on night two. Warren, who has also gained notable attention from the public and media outlets, is one of the only frontrunners appearing on the June 26 debate. No matter who will be speaking, it's sure to be a climatic event.

The number of Democrats running for president might be intimidating to some, but apparently President Donald Trump isn't that worried. However, perhaps he should be. According to a June 9 poll from The Economist/YouGov, Biden is leading by 30% among Democratic candidates, with Sanders coming in second and Warren in third. When it comes to Trump's polls, it's looking pretty bleak for the president. According to a Trump campaign poll, the president is losing in states including Pennsylvania, Wisconsin, and Michigan to Democratic opponent Biden. However, Trump has been continuously dismissed these results, and even reportedly fired several of his pollsters after the results surfaced. The 2020 Trump campaign did not immediately respond to Elite Daily's request for comment on the reported firings.

Following the poll results that showed Trump is falling behind, the president took to Twitter to claim that they were "fake polls" and it was too early in the campaign to focus on numbers. Trump wrote,

Only Fake Polls show us behind the Motley Crew. We are looking really good, but it is far too early to be focused on that. Much work to do! MAKE AMERICA GREAT AGAIN!

It's true that it's a bit early in the race to be hung up on numbers, especially since anything can happen in the game of politics. However, one thing is for sure, this is going to be a wild ride.

More like this
These Tweets & Memes About Matt Gaetz's Venmo All Make The Same Joke
By Cianna Garrison
The More Contagious B-117 COVID Variant Is Now The Most Common Strain In The U.S.
By Rhyma Castillo
Here's When McDonald's Caramel Brownie McFlurry Is Coming For A Sweet Spring Treat
By Daffany Chan
Stay up to date