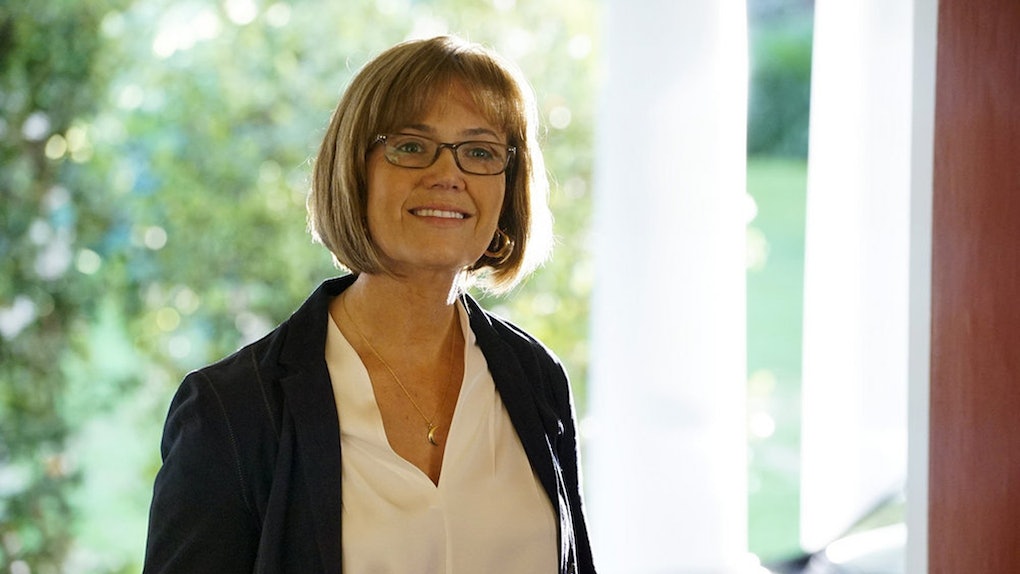 What Song Does Mandy Moore Sing In The 'This Is Us' Season 2 Finale? It's So Powerful

This Is Us' big draw for the Season 2 finale was Kate and Toby's wedding. But there was a second big draw, and that was the sight of "Old Jack" (aka Milo Ventimiglia, playing his character as if he'd never died in 1998). Audiences were lucky enough to see two ceremonies during the finale: the real one, with Toby and Kate, and the one in Kate's dream, where her parents renewed their vows in 2018. Kate had all the details of her parents' imagined vow-renewal down, including the song. Yes, Mandy Moore sings in the This Is Us Season 2 finale, and the song that Kate imagines she would sing is perfectly appropriate for the occasion. Spoiler alert: Don't keep reading if you have not watched the This Is Us Season 2 finale "The Wedding" yet.

Fans have to hand it to Kate, that was one heck of a meticulously crafted fantasy she had going, despite the fact the rest of her behavior in this episode borders on completely bonkers. One can understand why Toby was so worried she might runaway bride on him. (One also can't help but wonder if Toby's parents are right to be pushing their son not to go through with this.)

But the rest of the details Kate had down. The speech Jack gives at the altar as he and Rebecca renew their vows is on point. The outfits Tess and Annie have on are exactly what Beth would put them in. (Note: Kate doesn't think to include Deja.) So it's not shock that her mother would sing, because that's what Rebecca does. How exactly did Kate know it would be "Moonshadow," though? She must have been paying attention to the Season 1 finale, which was named for the same Cat Stevens song.

(Yes, Mandy Moore actually had "Moonshadow" as part of her repertoire years before she was cast as Rebecca. The more you know!)

As we learned in the finale of Season 1, Jack and Rebecca met when Jack entered the bar, with plans to rob it after a poker game gone wrong. Only he stopped and dropped all plans to turn to a life of crime when he walked in and saw a woman singing "Moonshadow" at the open mic.

That woman was Rebecca, fresh off the worst date she'd ever been on, and singing her heart out even though her demo had been rejected. This is how Rebecca and Jack met-cute, right after her performance, as a captivated Jack walked right up to her and asked her name.

In a way it's "their" song, so it only makes sense that at the ceremony to renew their vows, Rebecca would sing it for him (and the crowd) and Jack (sitting next to Kate, of course) would get all misty-eyed and happy with a life that had gone somehow just the way he hadn't planned, even though life never does that, not even on TV.

Now that Kate has plotted out in her mind the wedding vows renewal for her parents that never happened, she ready to go on. She lets go of the dream that will never be because it's not the right dream. It doesn't have Toby in it.

In a way, Kate's fantasy dream of her parent's perfect never-was ceremony is her way of saying goodbye to the dreams she held on to all these years of her father. Like Kevin says in his toast, they have to let go, because otherwise, it's like taking a breath and holding it for years. Despite telling Kevin that line, the truth is, Kate had been holding her breath for years too. She holds on to the urn, she holds on to the tee-shirts, she holds on to the memories of a life that didn't happen.

Rebecca doesn't sing "Moonshadow" anymore. She's married to someone else now, and that song is the past. So is the tee-shirt, and so are the memories. For the finale, Kate finally lets go. Let's hope when Season 3 rolls around next fall, it's the right choice.

More like this
In 'Riverdale' Season 5, Toni Topaz Is The Black Superwoman Without A Cape
By Erika Hardison
Who Did Emily Poison? 'The Handmaid's Tale' Season 2 Is Off To An Intense Start
By Ani Bundel
The 'This Is Us' Season 5 Finale Air Date Is Much Sooner Than Fans Thought
By Abby Monteil
Stay up to date