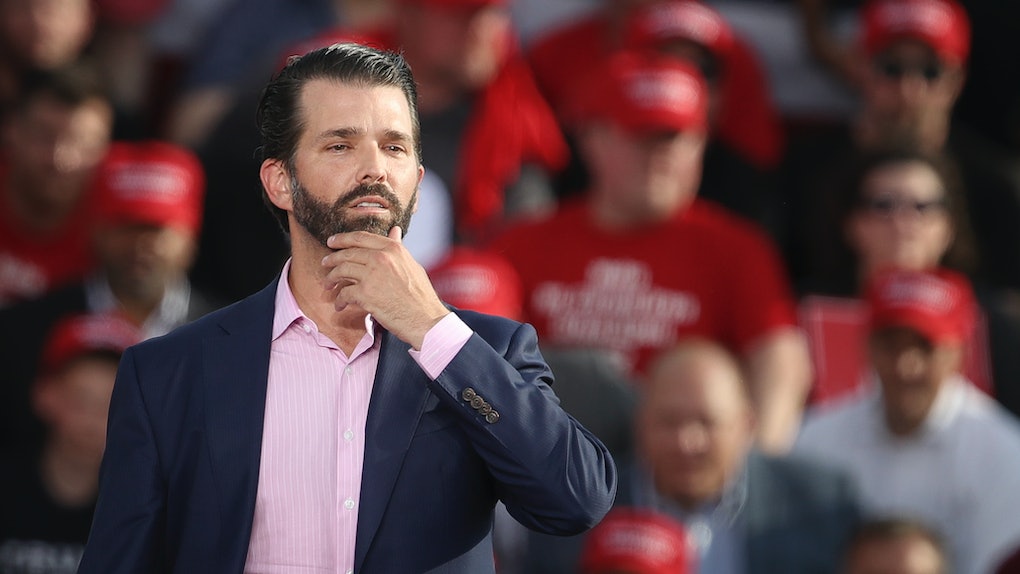 What Languages Does Donald Trump Jr. Speak? There Are A Few

For someone overseeing a company as big as The Trump Organization and serving as an (unofficial) face of presidential campaigns, speaking more than one language would surely be of help. With President Donald Trump's second presidential campaign ramping up, Donald Trump Jr. is out in front of the American people and making speeches to rally his father's supporters. Although he hasn't particularly flaunted it, President Donald Trump's oldest son does speak more than one language. So, how many languages does Donald Trump Jr., speak?

The first son speaks English and Czech, his parents’ two mother tongues, and he apparently speaks French as well after learning it in school. His mother, and the president’s first wife, Ivana Trump, was born in the Czech Republic and reportedly speaks five languages, including English, Czech, and Russian, according to a 1989 report from Pennsylvania newspaper The Morning Call. Trump himself likely speaks just one. Elite Daily previously reached out to the White House to confirm this, but did not immediately hear back.

Trump Jr. was born in 1977, the same year his parents married in New York. According to a New York Magazine profile of his family in 2004, he was close to his maternal grandparents — who lived in the Trump Tower six months out of the year — growing up. He reportedly spent summers in the Czech Republic and became fluent in the language while there.

Trump Jr.'s younger sister, Ivanka Trump, confirmed her brother speaks Czech on Twitter, saying in 2010 that while “I seem to only know the curse words,” her brother is fluent. However, it's been reported that she and their youngest sibling, Eric Trump, do share their brother’s French-speaking abilities. "Ivanka understands Czech, but the youngest is lazy,” their mother said to The Morning Call. “Of course, my parents now speak English well, so there's no reason to learn, I guess. But I'm working on it. They all speak French because they have it in school."

Trump Jr. hasn’t necessarily used his language skills to connect with voters on the campaign trail or in speeches in support of his dad. The oldest son, who is an executive vice president at The Trump Organization, has instead made a name for himself on the internet with MAGA tweets and political memes, and he remains English-centric on those platforms.

In fact, this appears to be reflective of the president's POV, too. In 2015, the president said, "We’re a nation that speaks English, and I think while we’re in this nation we should be speaking English,” per Reuters. In 2016, Politico reported that Trump spent $0 on Spanish ads — compared to Barack Obama and Mitt Romney’s combined $23 million in 2012.

The monolingual White House is a bit puzzling, considering neither Ivana nor current first lady Melania Trump spoke English as their first language. Melania and Donald Trump’s only son Barron is reportedly bilingual in English and Slovenian, while also learning French, his mother told People in a 2009 interview.

Although Czech or French may not be the most commonly spoken second languages in the United States, there are citizens in the country who speak those languages. Perhaps, once the president begins seriously running for a second term, Trump Jr. will use his ability to speak other languages to connect with non-English speakers. For now though, while he does speak more languages than his father, it seems more like a childhood factoid than a political strategy.