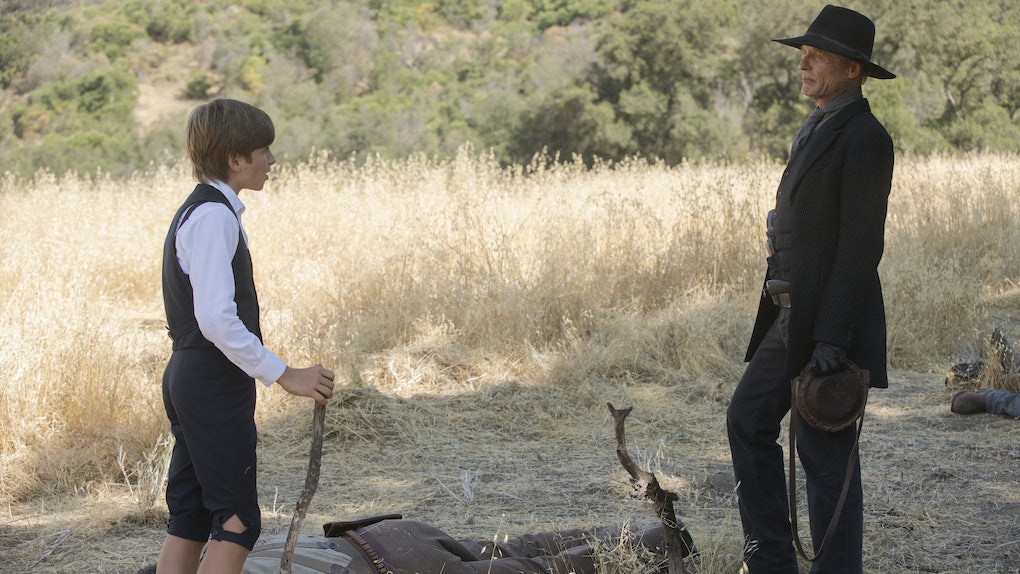 What Is William's Plan In 'Westworld'? He May Be Done Playing Along

Since the very early episodes of Westworld, the script has liked to toss around platitudes on how the park is a multilayered thing. It's one thing to the guests, another to the staff, another to the shareholders, etc. It's a convenient way of sounding mysterious without actually being mysterious. Delos being one thing to the shareholders and another to the guests is the way most companies work. None of this means much unless they spell it out. This season, the production is starting to draw back the curtain on it. What is William's plan in Westworld? How is Delos Inc. involved? Warning: Spoilers for Westworld Season 2 follow.

Episode 2 begins "back at the very beginning," when Delos decided to invest in Westworld. It was a foolhardy decision. Logan was literally seduced by the robots, finding himself alone in a room where no one was alive to judge him. After being allowed to sleep with them, he decided he was so pleased with the experience, he gave them money.

His father, James Delos, wasn't impressed. He wasn't interested in funding his son's virtual fantasy. Having heard about Dolores from Logan, James Delos was convinced William's "investment banker's journey of self-discovery" was just as self-involved and debauched.

But William had other ideas. He saw Westworld as the next step forward from Facebook, Google, and other tech giants whose real business is data collection. Collecting data on guests, when they believe themselves to be completely unseen? That's something Google could achieve only in their wildest dreams.

William spent his life obsessed with the park and Dolores (so much so, he brought her and a few hosts to be the entertainment at James Delos' retirement party.) But he was obsessed on a different level than Logan. Logan just wanted the pleasure aspect. William saw something greater, something bigger, something so big, he decided to build it off in one corner of the park.

In the Season 2 premiere, when the valley no one had seen before appeared on screen, fans started making jokes that Terraforming was just a thing which happens magically now. But Season 2 Episode 2 proves them wrong. The area where all the hosts went to drown was built decades ago, by William, in a private corner, where no one went.

Why did he build it? And what is it for? Don't know yet. But Ford knew about it and clearly used it as part of his new narrative.

William's speech to Lawrence seems to fit within the idea pushed by Westworld's producers — this season is all about justice. The time for the sinning in the park is over, and revenge will be swift, etc. But William isn't interested. Talking to Lawrence, he veers off the discussion of religion and a "place hidden from God." When Lawrence asks if Robert built the place they're going, William snaps.

No, Lawrence. He doesn't get that honor. I built it. And this place we're going is my greatest mistake.

Is this the same place viewers see all the hosts lying dead at the end? This place is somehow William's greatest mistake, but when he showed it to Dolores all those years ago, he seemed convinced it was going to be his greatest triumph.

One thing is for certain — William isn't planning on letting this place survive. In fact, it sounds like he might be willing to take the whole of Westworld (and maybe the other parks) down, to rid himself of the mistake he made all those years ago: "I'm going to burn this whole place to the ground."