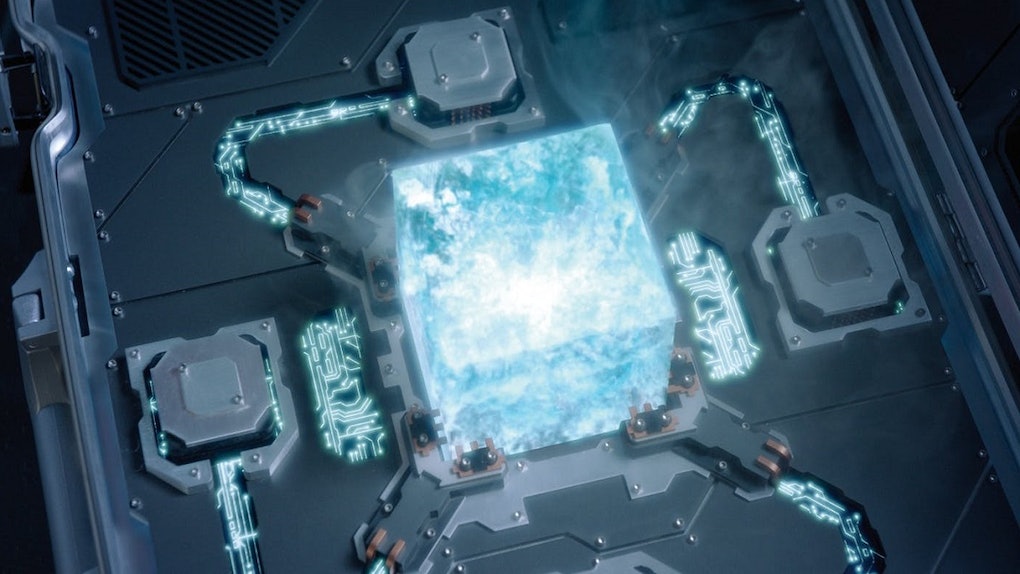 What Is The Tesseract? 'Captain Marvel' Reveals New Information

Perhaps one of the most brilliant moves Marvel made in the release schedule for Captain Marvel was placement. Fans complained when the DC Extended Universe got a female lead superhero film first, protesting they had been calling for a Black Widow movie since 2013. When Captain Marvel was pushed back from the original release date of July of 2018 to March of 2019, there were more complaints the studio wasn't taking it seriously. But Captain Marvel's placement was necessary, vis-a-vis Avengers: Infinity War and the Infinity Stones, like the Tesseract. But what is the Tesseract exactly? Warning: Spoilers for Captain Marvel follow.

The Tesseract is the first Infinity Stone to ever appear in the Marvel Cinematic Universe films. As fans may remember, the first two MCU films, Iron Man and The Incredible Hulk, were made before Disney purchased the company, and the fledgling studio was not sure if interconnected films would even work. (That's why Nick Fury was a post-credit scene in Iron Man. Because if the film had failed and The Avengers never happened, the DVD release wouldn't have included it.)

The idea of to do a long-range 20+ film interconnected series around the Infinity Stones didn't kick off until Captain America: The First Avenger, when "the Tesseract" was what Steve Rogers was trying to get ahold of before Red Skull, to save the world from destruction.

The Infinity Stones don't start in earnest until Phase II, with Thor: The Dark World and Guardians of the Galaxy. At that point, the game became "spot the Infinity Stone" as the movies were leading up to a scenario where all six would be in play.

However, no one knew what Earth was doing with the Tesseract for all those years between the time Howard Stark rescued it from the bottom of the sea and when Nick Fury first showed it to Professor Erik Selvig in a Thor post-credits scene which lead into the first Captain America movie.

Turns out Project P.E.G.A.S.U.S., which was what the Tesseract research work was coded under, had been going on longer than anyone knew. During the mid-1980s, the Kree scientist Mar-Vell, working under the alias Dr. Wendy Lawson, got involved in a joint project between NASA and the USAF to invent a lightspeed engine. Unfortunately, as Fury discovers in the files deep down in a government facility, the whole thing had been iced when the test plane crashed, killing both Mar-Vell and the pilot.

What the file didn't know was Carol Danvers survived, imbued with the Tesseract's powers. Of course, finding the Tesseract proved to be a bit more difficult because it was stored on Mar-Vell's lab, cloaked in orbit around the Earth.

While Danvers stopped the Kree who would take the Tesseract for themselves, Fury got the cube out of the station and back down to S.H.I.E.L.D. HQ. He hid it in Goose's belly, an alien known as a Flerken, which resembles a human cat, but with much larger insides. Goose hung out in Fury's office until he finally spat the Tesseract up like a hairball.

Hopefully, Nature's Miracle works on Flerken enzymes as well as it does on cat ones.