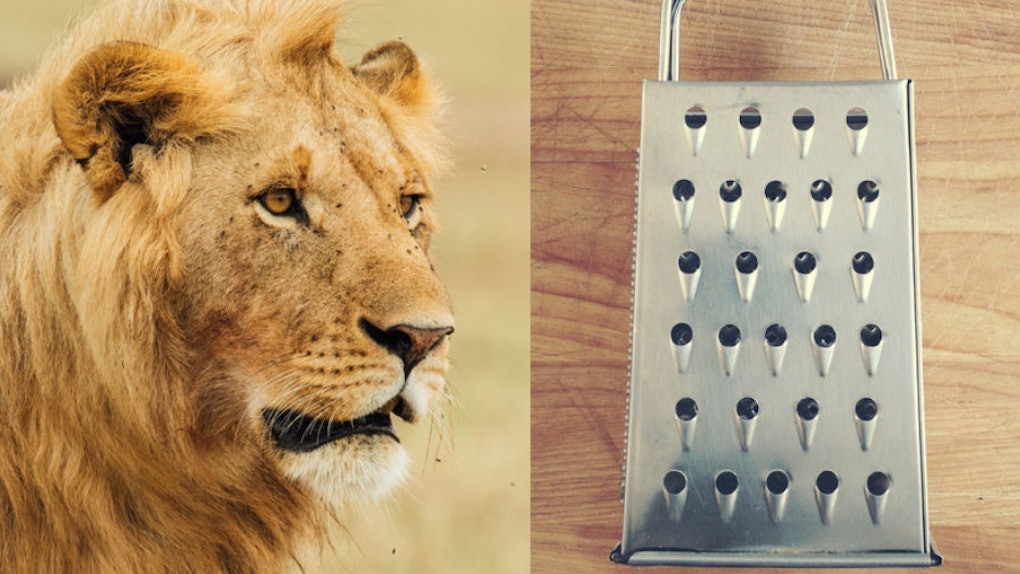 What Is The Lioness On A Cheese Grater? A Sexpert Explains Ancient Greece's Hottest Sex Move

I don't know about you, but the vast majority of my historical education was spent learning about two things: war and politics. We learned a lot about the rise and fall of empires, but we didn't learn much about the personal lives of our ancestors. And in my opinion, the personal stuff is always more interesting. I mean, when our ancestors were ~doing it~ what position were they doing it in? Well, according to The Cut, "the Lioness on the Cheese Grater" was a fan favorite in Ancient Greece. What is the Lioness on a Cheese Grater position, you ask? Good question.

In the ancient Greek play Lysistrata, a group of women decide to withhold sex from their partners until they agree to end the Peloponnesian War. The ringleader encourages the women to proclaim, "No lover or husband shall ever come near me with an erection ... I shall live my life at home unf*cked, dressed in my sexy clothes and perfectly made up, so that my husband will burn with desire for me."

Then the women get more specific. “I will not lift my silken slippers up to the ceiling,” they state. And then, it happens: “I will not adopt the lioness on a cheese grater position."

I know what we're all thinking. Uh, what? I mean, it's obviously sexual. But in what world are a lioness and a cheese grater sexually intertwined? That sounds painful.

Well, according to The Cut, historians have actually spent a fair amount of time trying to figure that out. Their first guess was that the position closely resembled what we now commonly refer to as standing doggy. You know, when one partner penetrates the other from behind, sometimes while the receiving partner bends over against a wall or a piece of furniture. That's because historians originally thought ancient Greek cheese graters had handles often decorated with carvings of crouching lions. And when a woman bends over, she — sort of — looks like a lion about to pounce.

The Cut points us towards Alan Sommerstein's theory that:

The woman stood bending forward (sometimes resting her hands on the ground or on a bed), in a posture reminiscent of a lion crouched to spring, and was penetrated from behind (either vaginally or anally).

Throughout the 19th century, The Cut reports that Sommerstein's theory was the most popular one. But when people started taking into account what an actual cheese grater looked like at the time, the theory started looking more and more questionable.

"An ancient cheese grater looks pretty much like the one in your kitchen," Cashman Kerr Prince, a visiting scholar at Wellesley who authored a 22-page paper in 2009 attempting to elucidate the mysteries of the fabled copulative pose, told The Cut. "It’s frequently metal, perforated, possibly with nails, and has all these little ridges on it."

In other words, the shape of the cheese grater hasn't changed over time — which means the original theory doesn't quite make sense. He ultimately concludes to The Cut that the position is some sort of variation of girl on top:

I think that it is a position that is going to involve the woman on top with, like, some extra back-and-forth moving or rocking. So a motion like the cheese going across the grater.

Huh. So what, exactly, does that mean if we were to, say, go home and try it out?

Right off the bat, I would suggest maybe a simple cowgirl position, with a woman grinding back and forth instead of bouncing up and down. Of course, you can switch this up. You could also flip around into a reverse cowgirl, again, grinding instead of bouncing.

If you want to go with the original interpretation and try your own lioness-style version of standing doggy, a woman could penetrate her partner with a strap-on while grinding back and forth to stimulate her clitoris.

Don't get too caught up in the "right" way to do the move; the original interpretation of the position has probably been lost to history. Instead, "embrace your inner lioness," as one sexpert suggests.

"To execute the Lioness on the Cheese Grater sex position, embrace your inner lioness and use your imagination," advises Dr. Stefani Threadgill, a sex therapist and sexologist. "It can be anything you want it to be."