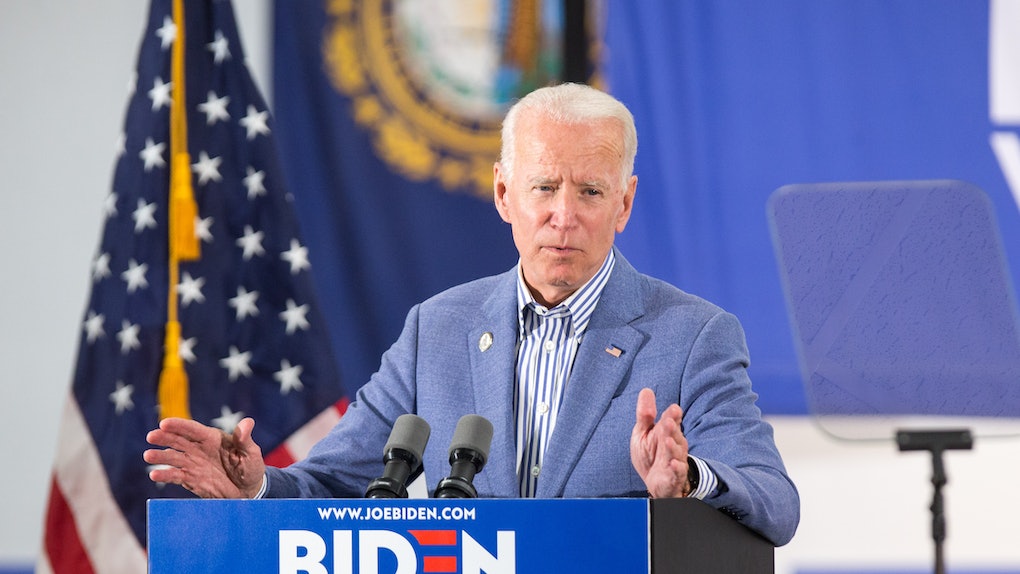 What Is The Hyde Amendment? Joe Biden Supports The Abortion Funding Ban – UPDATE

Over the past few months, reproductive rights have been a topic that's been on everyone's minds. As anti-abortion measures continue to be voted on and passed throughout the country, 2020 presidential candidates are speaking up about their views on the issue. However, one particular former vice president has expressed an opinion that has raised controversy. What is the Hyde Amendment, and why does Joe Biden support it? It seriously impacts lower-income people's right to choose.

UPDATE: On Thursday, June 6, Biden reversed his stance on the Hyde Amendment. In a speech in Atlanta at an event hosted by the DNC, Biden said, "If I believe health care is a right, as I do, I can no longer support an amendment that makes that right dependent on someone’s ZIP code."

EARLIER: On Wednesday, June 5, Democratic presidential candidate and former vice president Joe Biden's campaign confirmed to NBC News that he supports the Hyde Amendment, a ban implemented 43 years ago that prohibits federally funded abortions. However, this is quite a difference to a previous stance he had on the issue. On May 8, an American Civil Liberties Union (ACLU) volunteer asked Biden whether he would abolish the Hyde Amendment. It looks like his response then is extremely different to his opinion now. "Right now it has to be. It can't stay," Biden told the volunteer.

For those who are unfamiliar with The Hyde Amendment, it prevents abortions from being covered by government health programs, which could seriously inflict the reproductive health of people who use programs such as Medicaid. States can choose to expand Medicaid to fund abortions using their own revenue, but the Hyde Amendment makes it so that the states cannot use federal funds for this purpose.

According to Planned Parenthood, The Hyde Amendment was introduced in 1976 by Republican Rep. Henry Hyde, who pushed to take abortion funding out of Medicaid insurance coverage. In 1994, exceptions were made in cases of rape or incest, or when continuing the pregnancy would endanger the person's life. However, the amendment makes it so that Medicaid cannot cover abortions even when the doctor recommends an abortion procedure.

This amendment impacts abortion access for residents across the country. According to a Guttmacher Institute study from 2016, Medicaid covers one in five women of reproductive age. According to the Henry J. Kaiser Family Foundation, as of December 2018, 15.6 million women ages 19 to 64 had Medicaid coverage. And according to a Guttmacher Institute study from 2016, the amendment also disproportionally impacts residents of lower-income communities and people of color.

While this amendment impacts a huge portion of the United States population, it severely effects health care concerning low-income communities. People of color are disproportionally harmed by the Hyde Amendment, seeing as they make up a majority of individuals covered by Medicaid.

Not only do people of color and lower-income communities rely on Medicaid for insurance coverage, but these residents are the ones who need federally funded abortions the most. Guttmacher Institute reports that 60% of women of reproductive age who are insured by Medicaid do not live in states that cover abortion with state dollars. In addition, 75% of abortions performed in 2014 were among low-income patients.

Abortion procedures come at a high price. Guttmacher Institute reveals that a typical abortion procedure was nearly $500 in 2012. That doesn't factor in the cost a patient would have to pay to take off work to get the procedure done or pay for a babysitter if they already have children at home.

Since the Biden campaign confirmed that the former vice president supports the Hyde Amendment, other presidential candidates, such as Massachusetts Sen. Elizabeth Warren and South Bend, Indiana, Mayor Pete Buttigieg have spoken out against his stance. During an MSNBC town hall on June 5, Warren pointed out that the Hyde Amendment worsens inequality in America, and impacts lower income communities the most. She said,

The 2020 presidential election will be here quickly, and rest assured reproductive rights will be a huge talking point. Let the games begin.