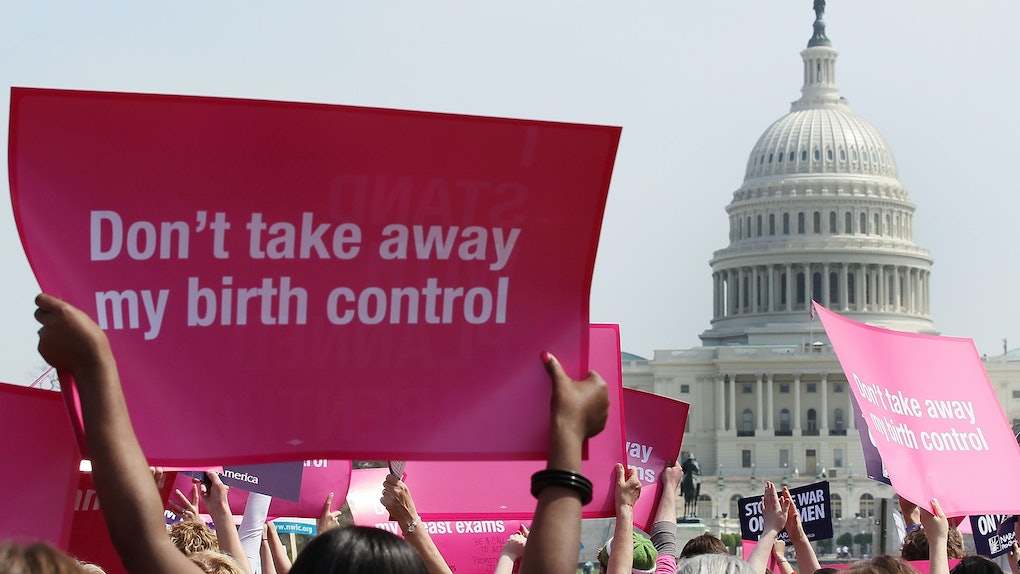 What Is The Each Woman Act? It's Bringing Abortion Rights To A Federal Level

If the year 2018 taught us anything, it's that reproductive health rights are under increased threat in the United States. With proposals and policies cranking out seemingly by the day that limit access to services like abortion, it's not a great moment for women's rights. But on Tuesday, March 12, two Democratic lawmakers introduced legislation that would limit certain restrictions on abortion funding. So what is the EACH Woman Act, you ask? Let's discuss.

In a nutshell, the bill aims to make sure women in America maintain their right to an abortion, without penalizing anyone based on where she lives, how much she earns, or how she is insured. The Equal Access to Abortion Coverage in Health Insurance (EACH Woman) Act, which was introduced in the House and Senate by Rep. Barbara Lee (D-California) and Sen. Tammy Duckworth (D-Illinois) on March 12, aims to remove bans on insurance coverage for abortion care.

One barrier that the EACH Woman Act aims to dismantle is the Hyde Amendment, which was passed in 1976 and prohibits federal money from paying for abortion services except to save the life of a woman who would be endangered by carrying a pregnancy to full term or in cases of rape or incest. Instead, with the Hyde Amendment, the decision on how and when to fund abortions is left up to state legislators.

This means that women insured through the Medicaid program, depending on their location, may be left without access to abortion care. The restrictions tend to affect low-income women and particularly those of color, according to Destiny Lopez, the co-director of All* Above All, in an interview with Bustle. This leaves them to pay for abortions with money that could be used for other reasons. According to the ALCU, a 1984 study by the Guttmacher Institute found 44 percent of women on Medicaid who got an abortion that year used money they saved for living expenses like food, rent, and utilities for their procedures. In other cases when coverage isn't available, women are sometimes left to carry their unwanted pregnancies to term, according to a 2009 study by the Guttmacher Institute and Ibis Reproductive Health.

In a statement to Elite Daily, Dr. Meera Shah, family medicine physician in New York and Fellow with Physicians for Reproductive Health, says about the legislation, “Now is the time to ensure that no matter where you live, how much money you make, or what your background is, you can access the health care you need, when you need it."

The EACH Woman Act aims to reverse those barriers by allowing any federal health program to pay for abortion services, and preventing states from dictating abortion coverage, per Bustle. "This isn't about what side you're on in the abortion debate. It's about equality and opportunity," Sen. Duckworth said during a press conference on March 12.

The next step, Rep. Diana DeGette (D-Colorado) said in a March 12 press conference, is scheduling a hearing on the bill and speaking to House Speaker Nancy Pelosi (D-California) about scheduling a vote. Pelosi, who has supported expanding abortion funding, has not said whether she will support the legislation. Elite Daily reached out to her representatives for comment, but did not hear back by the time of publication.

It unclear how far the bill will go, but it seems unlikely to pass the Republican-controlled Senate. However, Democratic lawmakers are staying optimistic.

"It's just important as we move forward that we pass legislation that honors women's reproductive health and their decisions rather than punishing poor women and federal employees," said Rep. DeGette, who is sponsor of the bill and co-chair of the Congressional Pro-Choice Caucus, in the press conference.

We'll see how this goes.