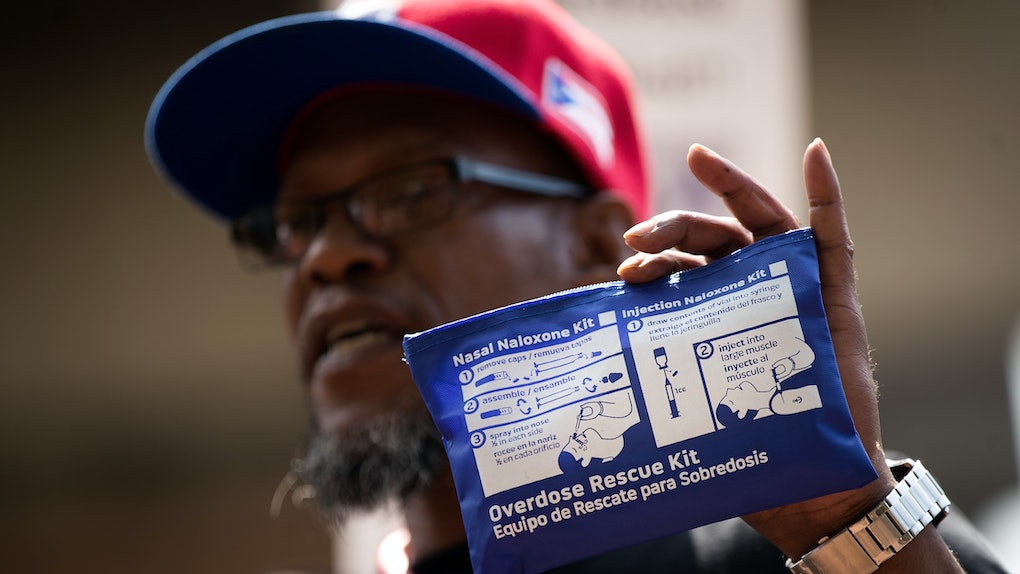 What Is Naloxone? The Surgeon General Is Advising People To Carry It

Have you ever witnessed an overdose? Trends indicate that one day you might, as the opioid epidemic continues in the United States. You should know there's a readily-accessible drug that can revive a person mid-overdose. So, what is naloxone? The surgeon general is advising people to carry it.

"The call to action is to recognize if you're at risk," U.S. Surgeon General Jerome Adams told NPR Thursday, April 5. "And if you or a loved one are at risk, keep within reach, know how to use naloxone."

Narcan, the brand name for naloxone, is an opiate antidote that temporarily reverses the effects of narcotic drugs and medications such as heroin, codeine, morphine, methadone, or Vicodin. It can be administered via nasal spray or injected into muscle tissue, though the nasal spray is the most common and much more accessible for the average person, per NPR, as it is available in most states without a prescription. Researchers found a tenfold increase in Narcan sold by retail pharmacies in the U.S. between 2013 and 2015.

If you're already thinking you don't need it — you might want to reconsider. From 2015 to 2016, opioid overdose deaths increased by nearly 28 percent, according to the Centers for Disease Control and Prevention (CDC), which indicates that the opioid epidemic is worsening.

Adams is trying to change the conversation about Narcan and drug addiction by encouraging people to actively purchase the medication for safekeeping.

"We should think of naloxone like an EpiPen or CPR," he told NPR on Thursday. "Unfortunately, over half of the overdoses that are occurring are occurring in homes, so we want everyone to be armed to respond."

The purchase could cost you, though. With its rise in popularity, and state funding in finite supply, Narcan prices are rising.

Next year's federal spending plan calls for $6 billion in funding to respond to the opioid epidemic, per NPR. Adams also noted that there are state grants which can enable them to give it out for free.

How does it work?

In most states, you can find a training seminar near you to teach you how to administer the nasal spray and to check for signs of a person overdosing.

The medication blocks the effects of the opioids that were ingested by knocking the drug off the brain receptor it landed on — literally reversing an overdose and usually buying first-responders enough time to reach the victim.

It's not a cure-all. You can overdose more than once.

Adams noted that law enforcement and medical professionals needed to work together to help put a dent in the opioid crisis.

"When a person is having multiple overdoses, I see that as a system failure," Adams told NPR. "We know addiction is a chronic disease, much like diabetes or hypertension, and we need to treat it the same way. We can't have someone overdose and send them back out onto the streets at 2 a.m., because they're going to run right back into the hands of the local drug dealer."

How much does it cost?

Narcan can cost around $130 to $140, for a kit that includes one to two doses, according to Time magazine. Like any medication, each dose comes with an expiration date as well.

Your best bet is to find a local training seminar, at which they're often given away for free.

Some view Narcan kits as enabling the opioid epidemic, rather than solving it.

There remains an as-of-yet unsettled ethical question about naloxone. That is, it has been proven to save lives — but does that enable addicts?

“There is frustration because a lot of people think that this is a fix-all for the heroin problem, which it’s not,” Detective Lt. Patrick Glynn, of the Quincy Police Department in Massachusetts, told The Marshall Project in 2015. Quincy was one of the first departments in the country to equip its officers with Narcan. “I understand why some officers are getting frustrated with it. You can have the same officer that revived the same person two or three times.”

Some took to Twitter to react to Adams' announcement Thursday with a similar concern.

CVS and Walgreens announced on Thursday, April 5 that they would stock Narcan nationwide, per the official U.S. Surgeon General Twitter account. "@CVSHealth and @Walgreens have announced they will stock NARCAN Nasal spray nationwide, provide training of their pharmacists and educate patients about risks of high dose opioids and benefits of having naloxone in the home," the tweet read.

Like with learning CPR, it's not fun to consider the potential necessity of having naloxone around, but as the opioid epidemic continues, it's a life-saving option to consider.