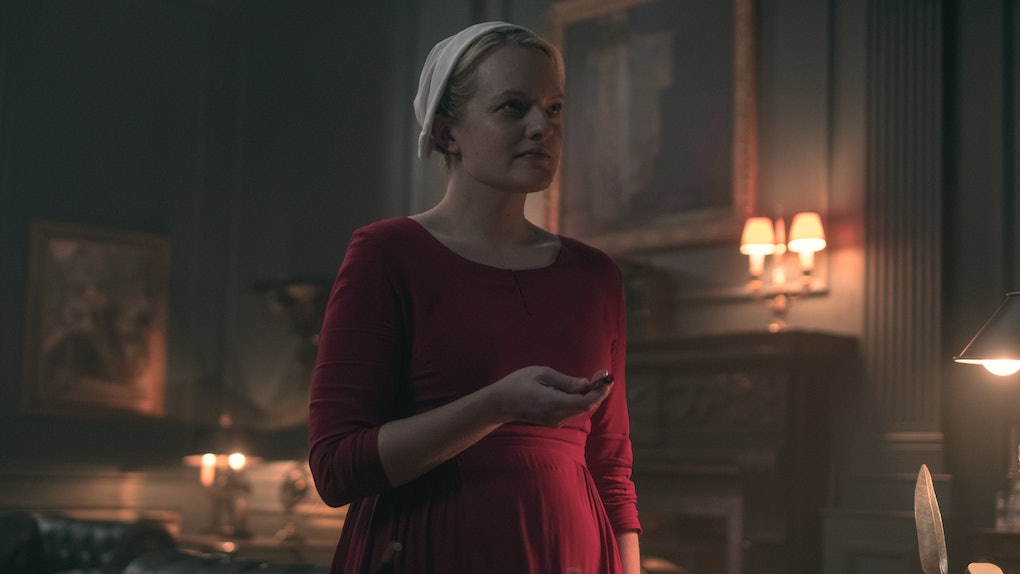 What Is June Editing? 'The Handmaid's Tale' Season 2 Episode 7 Ending Is Very Questionable

Last week's episode of The Handmaid's Tale ended with a shocker: Ofglen #2 blew herself up in a suicide bombing to destroy the new Red Center. This was a woman who in Season 1 insisted this life as a Handmaid beat her old one of drug addiction, and she would do nothing to screw it up. This week ended with a whole new rebellion, which leads to Serena Joy giving Offred a chance to do her old job again of copy-editing. What is June editing? And why is it Serena Joy who is making this offer? Warning: Spoilers for The Handmaid's Tale Season 2 follow.

This week's rebellion was twofold, but both halves were instigated by Offred. The first was when Offred told Serena Joy that Commander Cushing was gunning for their family. If she wanted to protect their shared baby, she was going to need to do something. The other occurred when Offred was inspired at the supermarket to do something just as radical. She spoke her name.

The opening sequence of this week's episode was striking. When the burial of the handmaids killed in the blast occurred, Aunt Lydia called them by the names they were assigned: "Ofrobert, Ofleland, Ofglen" etc. Contrast this with the reading of the names in Canada, where the dead handmaids were given their real names, and Ofglen #2 turned out to be named Lillie.

This is because Gilead wants to keep women from power, and it does so by erasing them. Ofglen had other no name in Gilead. Offred didn't even know her real name. She admits: "We never got that far."

Offred wasn't just a "June" in the world before. She was also a copy editor who worked for a major publishing firm. In Gilead, she's not even allowed to have writing utensils. But Serena Joy knows Offred's real name at this point, and moreover, somehow, she's learned what it was June used to do for a living.

To protect her family, Serena had Nick help her put together warrants to the Consular of Divine Law and submit them, as he does for the Commander. Now, Serena is stepping up into the Commander's seat in his office and creating all new declarations, undoing all the over-the-top security measures Cushing put into place. Having someone to edit them is a skill she's desperately in need of right now.

With so many handmaids killed in the blast, Gilead has found themselves shorthanded, pulling back those who are still fertile out of the Colonies. This means Janine and Emily are saved. Janine is so thrilled, she tackles Offred in a hug.

But seeing Emily reminds Offred she never knew Ofglen #2's name. So turns to her neighbor, Oferic and introduces herself. "I am June."

Oferic responds "I am Brianna."

Suddenly the handmaids are whispering their names to each other. There is power in identity. This is a rebellion beyond what Gilead can control.

There is power in employment, too. Serena Joy isn't going to have Nick help her this time. She needs someone she can trust completely. So, she's having Offred do the editing. Women are finally stepping into the roles of leadership.

But this is dangerous, as dangerous as the handmaids whispering their birth names in the fruit and veg section. Serena is entering the Commander's sanctum under the cover of night, the shades are drawn, and their rebellion of power is behind closed doors.

Eventually, the Commander will come home from the hospital, and he will believe himself to still be running the joint. How long until Serena Joy's rebellion is uncovered? How long until Offred's work as an editor comes out? How long until the name revolution among the handmaids becomes too big to control?