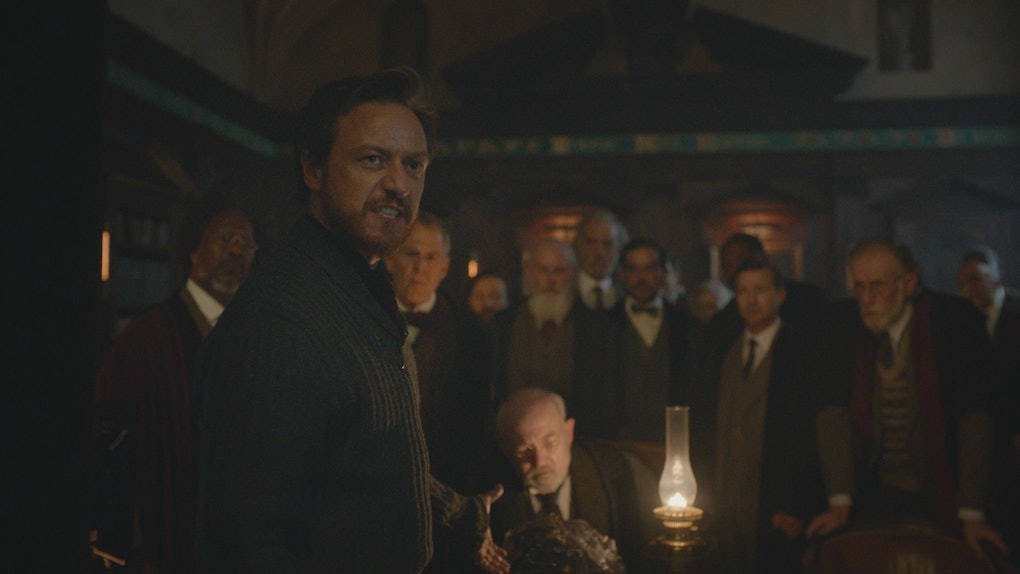 What Is Dust In 'His Dark Materials'? These Particles Reveal Another World

In the His Dark Materials premiere episode, Lord Asriel arrived home from his excursion to the North, only to narrowly miss being assassinated. His would-be killers were, of all people, his benefactors, The Master of Jordan College, and Lyra's teacher, Librarian Scholar Charles. By a stroke of luck, Lyra witnessed them poison her Uncle's wine and stopped him drinking it. In return, Asriel has her hideout to "spy," though his real aim is for her to watch his presentation on Dust. But what is Dust in His Dark Materials? Warning: Spoilers for His Dark Materials Season 1 follow.

As Lyra learns in Episode 2, "The Idea of The North," Dust is a touchy subject. On a hunch, she casually mentions it around Mrs. Coulter, only to trigger a far angrier response than she imagined. But considering the Master was ready to murder Asriel rather than let him give his presentation to Jordan's dons, perhaps she should have realized that Dust is driving everyone to extremes.

But what is it exactly? Originally known as "Rusakov particles," it's a substance visible only via pictures, developed using special photographic emulsions. This substance surrounds every man and woman in this world, starting from the onset of maturity when a person's daemon settles on its final form. Children, it should be noted, are Dust-free.

But the bigger discover Asriel has made is that using the same emulsion, and pointing it at the aurora borealis, reveals a city in the sky.

Asriel is at Jordan to ask for a research grant to go back and explore what this means. Is it a real city? The dons grant him the money, much to the displeasure of the Magisterium government, who send Lord Boreal to threaten the Master to revoke their scholastic sanctuary.

But the Magisterium has a much bigger issue with Asriel's research than a "city in the sky" that goes against its religious teachings. They're frantic to shut him down because it's all true.

The city, the Dust, all of it is real. They know because Boreal has been there.

After stopping by Jordan College, Boreal heads to a greenhouse, where a shimmering *something* vibrates in the middle of the room. He steps through it...

...And comes out the other side in the middle of a traffic island, where 21st-century ambulances whiz by, hybrid cars line the streets, and Boreal's iPhone X works just fine. He's crossed into our world from his.

From his conversation with his contact over here (who finds Boreal's pet snake "demon" slightly terrifying), it seems Boreal has been visiting our world regularly. The Magisterium has him on a fact-finding mission, trying to figure out how this new, technology-rich world can be exploited to further its control.

The Magisterium doesn't just want to shut Asriel down because his research threatens their teachings. It wants him stopped because if it gets out that the Magisterium not only knows about this world but plans to exploit it, it would be the scandal of the century.

That being said, there's no telling if Asriel's "city in the sky" is a city here on our Earth, or one on yet another multiverse. After all, if there are two proven universes, why not more?

More like this
The 'This Is Us' Season 5, Episode 14 Promo Teases Another Beth Story
By Ani Bundel
Why Isn't 'This Is Us' Airing On April 20, 2021? Season 5 Is On Another Break
By Ani Bundel
This TikTok Theory About Eric From 'Boy Meets World' Will Blow Your Mind
By Rachel Varina
Stay up to date