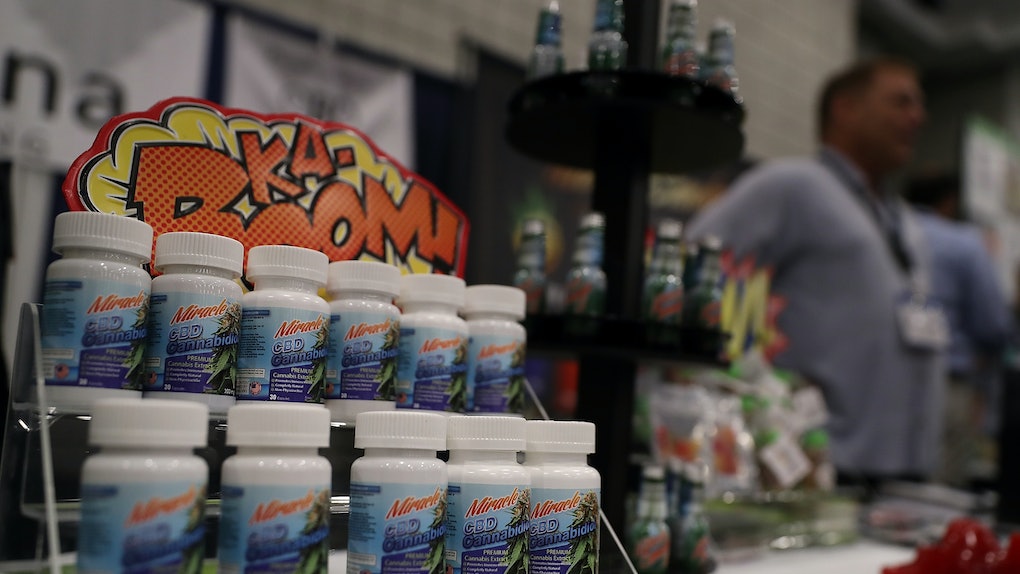 What Is CBD Used For? The Cannabis Compound Is Kind Of Like Weed, But Not Exactly

As marijuana continues to become more and more accessible across the country, scientists are learning about new uses and medicinal benefits associated with the plant almost every single day. One of the latest developments is the discovery and application of cannabidiol (CBD), a cannabis compound that might provide legit health benefits for some people, without the whole "being stoned" aspect of using marijuana. For anyone out there who hates the feeling of being high, you might want to learn more about what CBD is used for, because it provides all of the benefits of marijuana without any of those scary stoned feelings.

So what's so special about CBD compared to other strains of marijuana?The cannabinoid that our society associates with smoking weed — and with the feeling of being "high" — is THC, or tetrahydrocannabinol. On the other hand, CBD is a totally different type of cannabinoid, and you don't really get high from it, per se.

CBD is non-psychotropic, meaning that it doesn't provide you with that euphoria associated with smoking marijuana, but it is still technically psychoactive, meaning that it can cross the blood-brain barrier in your body. In other words, CBD provides all of the psychological and medical relief of marijuana, without making you feel like you're really freaking stoned.

The "high" that leads to feeling stoned won't happen with CBD oil.

CBD is becoming a popular medical option for people looking to use marijuana as a means to decrease feelings of anxiety, depression, or other mental health problems, as well as a pain-reliever for more serious medical ailments. It's an ideal option for people who want to reap the medicinal benefits without actually feeling high. Technically speaking, CBD can contain trace amounts of THC, but not enough to actually make you feel high.

The most common way to use CBD is through a distilled oil: You can drop the oil into a drink, turn it into a vapor with the help of a humidifier, or you can even add it to a recipe to make yourself a little CBD treat. You can also apply CBD oil directly to a part of your body that's in pain, and the oil will absorb through the skin and immediately begin to relax the affected area.

This all sounds a little too good to be true, right? A type of marijuana that won't cement you into the couch, but will still make you feel better? Well, not so fast.

There are still some aspects of CBD that haven't been totally regulated for the general public.

For example, dosage is one such question that is largely unanswered, and there are no guidelines that we know of yet for the general public as to how much oil you should use for any given medical problem.

What's more, the question of legality holds a few gray areas that you might want to pay attention to. As of now, CBD oil is legal in 43 states (with medical marijuana only legal in 28 states). You can buy CBD oil at dispensaries in those states, but it's totally illegal to cross state lines with the oil.

There are some websites that work to get around those laws, but you could be taking a major risk by purchasing from them. One thing to pay attention to — especially if you're trying to purchase CBD oil in a state where it's not legal — is the THC concentration: According to the California-based nonprofit organization Project CBD, as long as there's less than 0.3 percent THC in the CBD oil, and as long as it's been extracted from the seed or stalk of the hemp plant (rather than the flowers or leaves), it's safe to be shipped to any state in the country. The really big catch here, though, is that CBD can't actually be extracted from hempseed. Project CBD says that the compound "can be extracted from the flower, leaves, and, only to a very minor extent, from the stalk of the hemp plant." So, you may want to be a bit skeptical if a company says they "legally" extracted their CBD from hempseed or stalk, given that doing so — at least in a meaningful way that will actually provide the health benefits you want — seems to be pretty hard, and it may mean that either a) the product doesn't have the benefits it claims to have or b) it was made illegally, which obviously isn't good either. As you can tell, the details are pretty important here, and the gray areas are, well, very gray.

If you're not a big marijuana person, but CBD oil sounds kind of great, the best thing to do is to go to a dispensary where you can speak with a professional in person. Marijuana growers understand far more about this stuff than your best friend's older brother, so it's in your best interest to leave the advice to the experts.

More like this
The TikTok Recipe You Should Try, Based On Your Zodiac Sign
By Chelsea Jackson
7 TikTok Recipes Using Ramen To Make Lasagna, Pizza, Smoothies, & More Treats
By Kelly Pau
These 40 Clever Vaccine Selfie Instagram Captions Deserve A Shot On Your Feed
By Rachel Chapman
Stay up to date