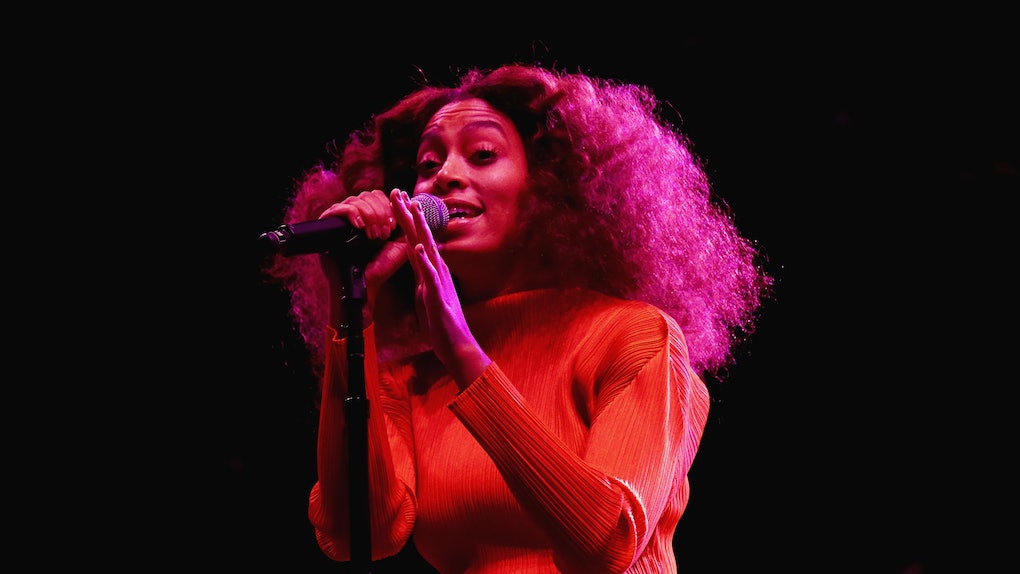 What Is Autonomic Nerve Disorder? Solange Knowles Is “Quietly Treating” The Condition

Well guys, 2017 clearly isn’t done with us yet. Over the past 12 months, we’ve witnessed heartache, trauma, political scandals, and have heard about some of the most unfortunate diagnoses of our favorite celebs, from Selena Gomez’s struggle with lupus, to Lady Gaga’s battle with fibromyalgia. Now, just days shy of 2018, Solange Knowles has come forward to reveal that she, too, has been “quietly treating, and working through an autonomic disorder,” leaving fans to wonder what is an autonomic nerve disorder, and what does this mean for the singer-songwriter?

The diagnosis came just months before the "Cranes In The Sky" performer was set to perform at AfroPunk to ring in the new year. Due to her health, however, Knowles has decided to pull out of the festival. Although an apology or explanation is hardly needed — after all, self-care should always come first in every circumstance — she expressed how upsetting it is to have to cancel her show, promising fans she’d make it up to them when her body is able to do so. For now, though, her number one priority is nursing her body back to health.

[It's] been a journey that hasn’t been easy on me. Sometimes I feel cool, and other times not so cool at all.

As a part of the self-care that I’ve tried to encourage this past year, it needs to start with myself, and I’m looking forward to doing a better job of this [in] 2018.

Prioritizing self-care is something we should all be aspiring toward in 2018, and part of that means making ourselves aware of these types of medical conditions, how they develop, and what symptoms might be waving red flags. By becoming more knowledgeable about these things, we're better able to take care of our bodies, and we have a better idea of when something has gone awry. To start, here are a few facts about autonomic nerve disorder to help you better understand the condition and shed some light on what it is, exactly, that Knowles might be going through right now.

1. The Disorder Happens When Nerves Are Damaged

In order to understand what autonomic nerve disorder actually is, you need to know where it stems from. The autonomic nervous system (ANS), according to Healthline, is comprised of sympathetic and parasympathetic nerves that control basic functions like body temperature, breathing, and digestion, all of which you don’t have to consciously think about in order for them to work.

If you think in terms of telephone lines, the ANS is wired to your heart, liver, sweat glands, skin, and the interior muscles of your eyes. When these nerves are damaged, different functions of the body suffer as a result.

2. There Are Different Types Of Autonomic Nerve Disorders

From what we know right now, it seems that no one is certain about the specific form of autonomic nerve disorder Knowles is battling. Granted, according to her Instagram post, it's only been a few months since the official diagnosis, so it's safe to assume that both she and her doctors are still learning more about her condition.

What we do know is that, generally speaking, there are different types of autonomic nerve disorders, and those who live with the condition can experience a wide range of symptoms that can be subtle — such as vaginal dryness or trouble orgasming — or more severe, like the inability to swallow food, blurry vision, or muscle weakness.

3. They Can Be The Result Of A Pre-Existing Disease

The Mayo Clinic reports that autonomic dysfunctions develop in one of two ways: They can be a "secondary condition of another disease process," piggy-backing things like diabetes, alcoholism, Parkinson's, and autoimmune disorders. They can also, however, be a "primary disorder where the autonomic nervous system is the only system impacted."

4. Over One Million Americans Suffer From An Autonomic Nerve Disorder

Even though one million out of 325 million is only a fraction of a whole, it's still a significantly large number, and if that many people are suffering from these types of diseases, it’s time we started the conversation to raise awareness.

5. A Diagnosis Comes From A Few Physical Examinations

Due to the fact that there are so many different types of autonomic nerve disorders and symptoms that could be related to them, doctors are very careful and precise when it comes to making an official diagnosis. This could possibly be why Knowles' condition is unnamed at this time. It's only been a few months since she was diagnosed with having a disorder in general, so it could very well be that doctors want to keep a close eye on her symptoms and perform more tests to narrow down what it is the performer is actually experiencing.

A common symptom in most autonomic disorders is a decrease in blood pressure, so doctors will evaluate a patient's blood pressure changes during certain maneuvers, according to Merk Manual. Doctors will also look at how the individual's heart rate responds to deep breathing, while sweat tests are issued because patients can also become intolerant of heat when living with the disorder.

6. There Are Different Ways To Treat Autonomic Nerve Disorders

The first step to nursing these disorders is to identify whether it's a result of a pre-existing disease. If so, that needs to be addressed first and foremost. From there, certain lifestyle changes, such as drinking enough fluids, to seeking professional counseling and prescription meds, can all help you live comfortably with the condition.

We love you Solange, and we hope you get the care you deserve!

More like this
These 40 Clever Vaccine Selfie Instagram Captions Deserve A Shot On Your Feed
By Rachel Chapman
I Tried Singing While Running Like Miley Cyrus & OMG, My Lungs
By Rachel Varina
TikTok's "Nature's Cereal" Ice Cream Is A Bussin' Dessert Version Of The Viral Trend
By Rachel Chapman
Stay up to date