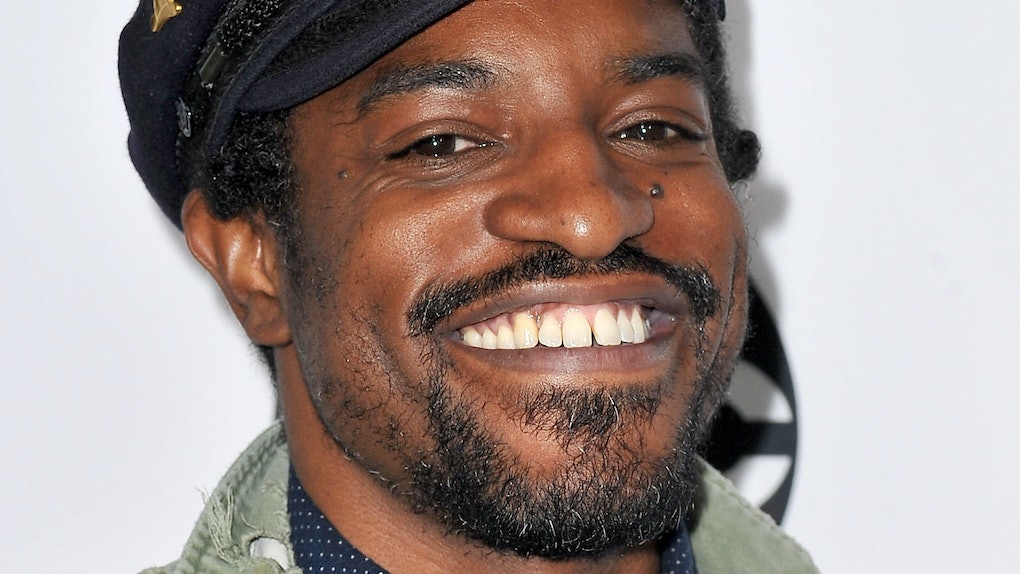 What Is Andre 3000 Up To? Outkast Was Just One Part Of His Multi-Faceted Career

As it turns out, roses really smell like the Super Bowl Halftime Show. Well, kind of, anyway. Big Boi, aka one half of the hip-hop duo Outkast, will be performing at the 2019 Super Bowl while the other half continues to slay as the artist known as André 3000. André's Outkast brother Big Boi will be taking the football stadium stage on Feb. 3 with additional performers Maroon 5 and Travis Scott, which leaves some folks wondering — What is André 3000 up to? Trust me when I say this icon hasn't gone anywhere.

If you're a mid-range millennial like me, your best André 3000 references are surely from your middle school dances where you would bump and grind to Outkast's hits "Hey Ya," "Ms. Jackson," and "So Fresh, So Clean." (Wow, just typing those out loud is taking me way back to some serious Bath & Body Works glitter-roller days.) However, both Big Boi and André's careers didn't stop when you finally got your driver's permit.

In fact, André 3000 and Big Boi (a.k.a. André Benjamin and Antwan Patton) released a full-blown movie in 2006, just one year before I graduated high school. It was called Idlewild and the summary on IMBD states:

A musical set in the Prohibition-era American South, where a speakeasy performer and club manager Rooster must contend with gangsters who have their eyes on the club while his piano player and partner Percival must choose between his love, Angel or his obligations to his father.

Since then, they continued to harness their individual careers which took André on a robust creative path.

He continues to produce and collaborate with other musicians, but also dabbles in fashion now, too. In 2018, André designed a sneaker collection with Tretorn which was reportedly inspired by his hometown, Atlanta. The Tretorn website explains,

The highly anticipated collection was inspired by André’s personal connection to the shoe as he was growing up in Atlanta. From André’s original sketches to the completed line, the classic Nylite has been infused with the style icon's playful spirit and design sensibility... The “I André Benjamin will not draw in class” capsule collection features 10 unique designs including updates to classic Tretorn styles, inspired by Tretorn’s prep heritage and Andre’s classroom daydream sketches.

In addition to music and fashion, André is back on the big screen. He currently stars alongside Robert Pattinson in the 2019 Sci-Fi movie High Life, which is revered as "an eerily sexy space thriller" by Vanity Fair. The movie is scheduled to come out in April, but for now, you can check out the disorienting trailer featuring your boy gardening in outer space.

As far as music is concerned, André did tell Complex rap is more of a "hobby" for him these days and that he's happy to let the "new wave of artists" thrive. He told Complex, "When I was 25, I said I don’t want to be a 30-year-old rapper. I’m 42 now, and I feel more and more that way." In fact, he continued,

Do I really want to be 50 years old up there doing that? When I watch other rappers that are my age I commend them, but I just wonder where the inspiration is coming from. At this stage I’m really more focused on what I am going to be doing 10 years from now. And I hope to God it won’t be rapping.

Ok, Big Boi. The Super Bowl is all yours.

Everyone else, keep your eyes out for André 3000 everywhere but the football field.

More like this
Mark Tuan's Quotes About His Solo Career Tease Endless Potential For The Future – EXCLUSIVE
By Michele Mendez
Big Hit's Response To Rumors BTS' 2021 Comeback Is In May Is Making ARMYs Suspicious
By Michele Mendez
With 'Like Water,' Wendy Found Her Biggest Cheerleaders In Her Red Velvet Bandmates
By Michele Mendez
Stay up to date