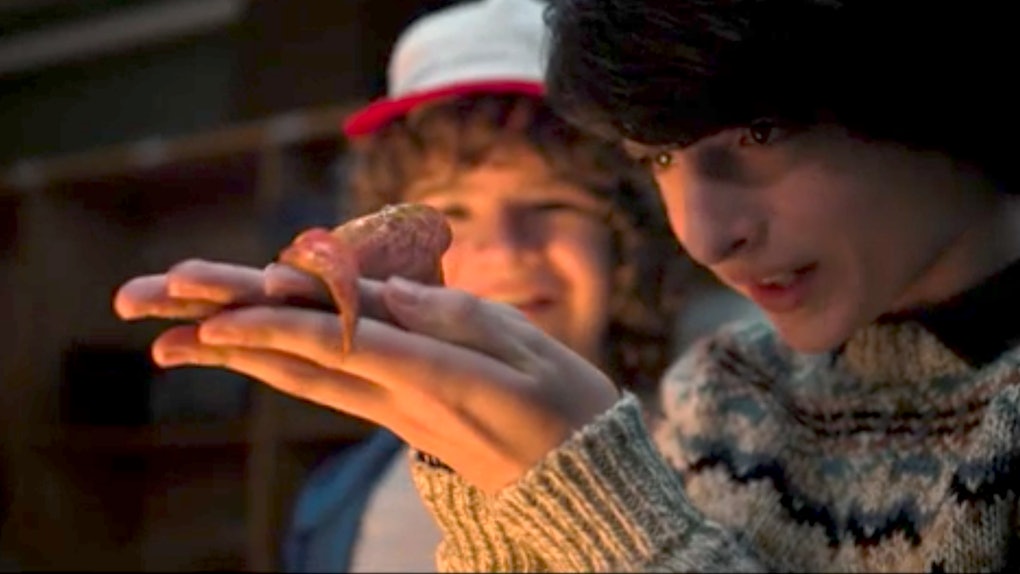 What Is A Pollywog? 'Stranger Things' Mentions The Species In Season 2

The large, shadowy, big bad monster is still shrouded in mystery in the first few episodes of the new season of Stranger Things, but a smaller, cuter creature has found its way into Mike, Will, Lucas, and Dustin's lives. At the start of Episode 3 in Season 2 of Stranger Things, Dustin happens upon a slimy little creature, and enlists his friends' help in trying to figure out what it could be. Their best guess is that it's a pollywog, so what is a pollywog and how does it figure into Stranger Things this season? Here's everything you need to know. Oh, and don't worry about spoilers beyond the first three episodes of the new season.

Although he should probably be much more wary of mysterious creatures popping up in Hawkins after what happened to Will last year, Dustin excitedly keeps the little tadpole-looking thing as a pet when he finds it in the trashcan outside of his house. He keeps his new little buddy in his turtle's terrarium and feeds him 3 Musketeers bars, deciding to name him after one of the Musketeers: d'Artagnan.

After checking out pretty much every book about reptiles in the Hawkins Library, Dustin presents d'Artagnan to his friends, including new addition Max, and tells them that he thinks the little guy might be a pollywog. But the kids notice some very concerning differences in d'Artagnan from other reptiles, such as its aversion to light and its warm body (as opposed to cold-blooded reptiles).

It sounds like d'Artagnan is more than just your ordinary pollywog, but just to be sure, here's some info about pollywogs. For one thing, pollywog is just another word for a tadpole, which is a more familiar term to most people. Although the term is mostly used in reference to newborn frogs or toads, a pollywog can actually refer to the larval stage of any amphibian. Also notable is that most pollywogs are entirely aquatic creatures, but as Dustin points out, there are a few discovered tadpole species that can walk on land. Most pollywogs are also herbivorous before undergoing metamorphosis and transforming into a carnivorous adult.

Pollywogs also hold cultural significance in certain mythologies. The mythology of the Wa people of China and Myanmar traces their roots back to two ancestral tadpoles, and a tadpole hieroglyphic represented the number 100,000 in Ancient Egypt. Some cultures in China, India, and Peru also consume certain species of tadpoles as food.

So where does that leave us with d'Artagnan? Well, it certainly does seem like pollywog is the most accurate description we can give him with what we have to go off of. To drive the point home, we even see d'Artagnan undergo traditional metamorphosis by growing a pair of rear legs towards the end of Episode 3. But since this is Stranger Things, don't expect this strange little tadpole to turn into your ordinary frog.

I think the detail that stands out the most in the definition of a pollywog is the fact that the term describes the larval stage of any amphibian. "Any" could, of course, also mean dangerous, alternate dimension amphibians. And after we saw Will cough up what looked suspiciously like a tinier version of d'Artagnan back in the Season 1 finale after his return from the Upside Down, it seems pretty obvious that the pollywog is going to turn into something from the scary other dimension that won't just hop on lily pads and eat flies.

We will have to just keep bingeing on into the rest of the new season of Stranger Things to find out what d'Artagnan really turns out to be.

More like this
These Tweets About Regé-Jean Page Leaving 'Bridgerton' Are Royal Bummers
By Cianna Garrison
In 'Riverdale' Season 5, Toni Topaz Is The Black Superwoman Without A Cape
By Erika Hardison
5 Facts About Courtney From 'The Circle' Season 2
By Dylan Kickham
Stay up to date