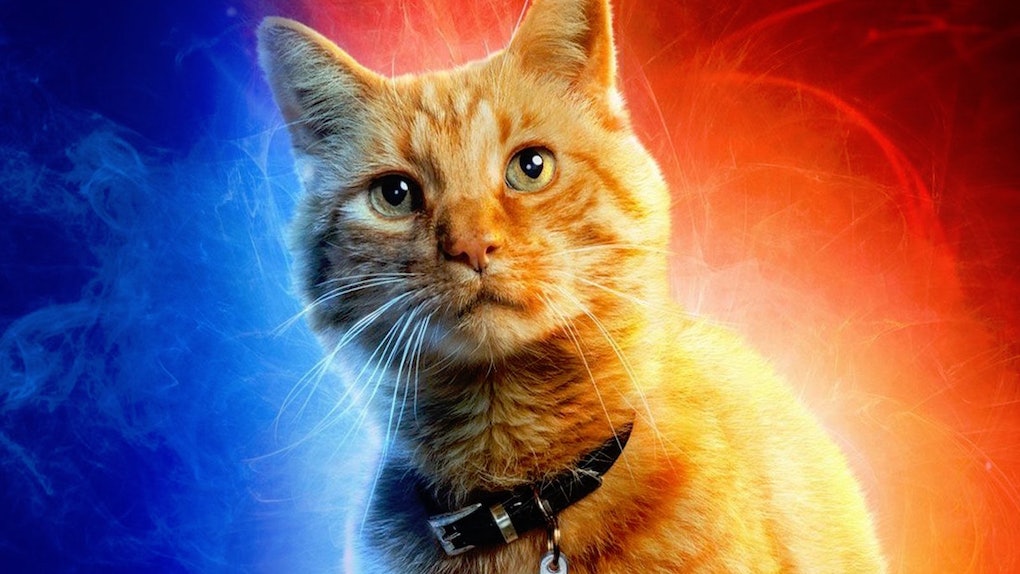 What Is A Flerken? Here's What 'Captain Marvel' Fans Should Know About The Creature

Captain Marvel did not introduce just one superpowered alien into the Marvel Cinematic Universe. One of the most surprising twists in the new movie revolves around the identity of Carol Danvers' cat Goose. Although we get a small glimpse of what Goose is really capable of, several moviegoers will probably leave the theater asking the same question: What is a Flerken? Here is what Marvel fans need to know about the powerful new creature.

Spoiler alert: This post contains plot details from Captain Marvel. Goose first belonged to Carol Danvers' mentor at the the U.S. Air Force, Dr. Wendy Lawson. When Carol crashed back down onto earth and teamed up with Nick Fury to investigate Lawson, the two come upon Goose in a hallway in the highly secure Project PEGASUS building, where Lawson had been conducting all her research. Goose immediately takes a liking to Carol and Nick, and stows away in the plane that they use to escape PEGASUS.

At first, it seems like Goose is just a loyal copilot for the Captain Marvel crew, but things start to get weird when the Skrull leader Talos first sees him. Talos reacts with extreme terror to Goose, referring to him as a Flerken. It seems like just a quirky bit of fun that Skrulls may have a deathly fear of cats, but we soon find out that Goose is no ordinary cat. Captain Marvel soon realizes that Wendy Lawson was actually a Kree scientist named Mar-Vell, and that her cat was also hiding an intergalactic secret. While battling the Kree on Mar-Vell's laboratory, Goose protrudes several large tentacles from his mouth both to store the Tesseract and to battle enemies.

Yep, Talos was right to be scared of Goose, because he is indeed a Flerken — an alien creature to resembles earth's cats, but actually hides a pocket dimension full of deadly tentacles within itself. This reveal comes as a shock to most moviegoers, but fans of the Marvel Comics were actually probably expecting it going into the movie. An issue of Captain Marvel from a few years back revealed that Carol Danvers' cat, which is named Chewie in the comics, is a tentacle-filled Flerken.

Captain Marvel does not reveal too much about Goose's powers, but it is clear that he would be a powerful ally for the Avengers. Goose uses his pocket dimension both to store the Tesseract as well as to summon powerful tentacles to fight opponents. His scratches also seem to be mysteriously powerful, as one scratch is able to permanently ruin Nick Fury's eye. In the comics, Flerken are also able to use their pocket dimensions to instantly travel across dimensions, so we will have to see if Goose utilizes this ability in the movies.

It is unclear whether Goose will show up in Avengers: Endgame or not. Carol left Goose with Nick Fury at the end of Captain Marvel, and we last see him living in Nick's S.H.I.E.L.D. office, but strangely, Goose has never shown up or been mentioned by Nick in all of the S.H.I.E.L.D. chief's subsequent MCU appearances. Is Goose still in Nick's office, or did he move elsewhere? We will have to see if Avengers: Endgame features this powerful creature.