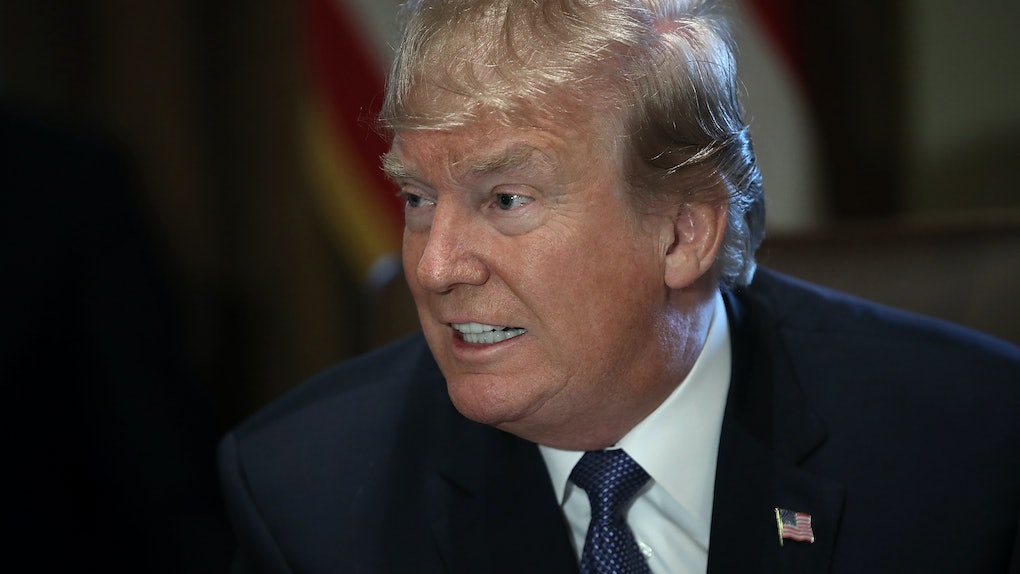 What Is A Diversity Visa? Donald Trump Is Blaming The Program For NYC Attack

Donald Trump is responding to the recent attack in New York City that killed several people by resolving to tighten up the immigration vetting process. The president took to Twitter on Nov. 1 to announce that he plans to dismantle the diversity visa program, through which the 29-year-old alleged attacker came to the United States in 2010. But what is a diversity visa, and could eliminating it cause any sort of change?

On Oct. 31, man drove down a Manhattan bike path in a pickup truck, killing eight people and wounding more than a dozen others. He then got out of the truck and brandished imitation weapons, before being shot by the police and taken into custody. On Nov. 1, federal prosecutors filed terrorism charges against the man, who reportedly left behind notes written in Arabic that stated "the Islamic State would endure forever.”

After the attack, it was determined that the alleged terrorist came to the United States from Uzbekistan through a diversity visa program — a fact that Trump quickly swooped in on. The president slammed the program on Twitter, and vowed to put an end to diversity visas. He also delivered a special, angry call-out to New York Sen. Chuck Schumer, who helped create the program, as well.

“It’s the lowest level of criteria that any part of our immigration system has, is through the lottery system,” she said. “So to try and argue this is a system that thoroughly vets people shows a total lack of understanding for what this process is.”

So what are these visas, then?

The diversity visa program, otherwise known as the green-card lottery, grants visas to immigrants from countries that do not have a high volume of citizens migrating to the United States. The program began in 1990 and awards around 50,000 visas a year, according to The Atlantic. Applicants must have a high school diploma or two years of qualified work experience in order to be considered, and are selected at random by a computer. The majority of people picked are from African nations, The Washington Post reported.

Instead, the president backs a merit-based immigration system, otherwise known as the RAISE Act. RAISE favors applicants who are between the ages of 26-30, have been offered an extremely well paying U.S. job, and are able to speak English at a high proficiently level. Questions on the application include: "Do you have a Nobel Prize or major international award?" and "Have you won an Olympic medal in the past 8 years?"

That system obviously favors a very, very small sampling of people, and would severely limit the amount of immigrants allowed into the United States.

Despite controversy now, the original diversity visa program was a bipartisan effort.

Schumer, a Democrat, introduced the idea of diversity visas as part of a House bill in 1990. It was a bipartisan effort, and signed into law by Republican President George H.W. Bush. In 2013, the New York senator was part of unsuccessful effort to end the program.

Schumer responded to Trump's slight by calling out the flaws in the president's response to terrorism. His statement on Nov. 1 read,

I have always believed and continue to believe that immigration is good for America. President Trump, instead of politicizing and dividing America, which he always seems to do at times of national tragedy, should be focusing on the real solution — anti-terrorism funding — which he proposed cutting in his most recent budget.

I’m calling on the President to immediately rescind his proposed cuts to this vital anti-terrorism funding.

It does seem incredibly counterintuitive that Trump claims to be so concerned about terrorist attacks, and yet is attempting to knock down funding that's crucial to keeping Americans safe. And Schumer isn't the only one who thinks so.

“Under the president’s proposal, nearly all federal funding to the NYPD would be eradicated,” NYPD Commissioner James O’Neill said during a press conference in March. “This funding is absolutely critical. It is the backbone of our entire counterterrorism apparatus.”

New York City Mayor Bill de Blasio also echoed Schumer's sentiments, noting on CNN that "the last thing the president or anyone else should do is politicize this tragedy. The last thing we should do is start casting aspersions on whole races of people or whole religions or whole nations. That only makes the situation worse."

During a press conference on Nov. 1, New York City's Gov. Andrew Cuomo also criticized Trump's response. He said that the president's tweets "were not helpful," not "factual," and also seemed to "point fingers and politicize the situation."

"[The visa diversity program] was a bipartisan law that was passed that had basically no relevance to the facts of this situation," Cuomo said. "... As I said before, you play into the terrorists to the extent you disrupt and divide and frighten people in this society. The tone now should be the exact opposite."

In light of everything that happened on Tuesday, it would be helpful for our president not to call out members of the Senate, and instead work together to figure out some well thought out, bipartisan solutions.