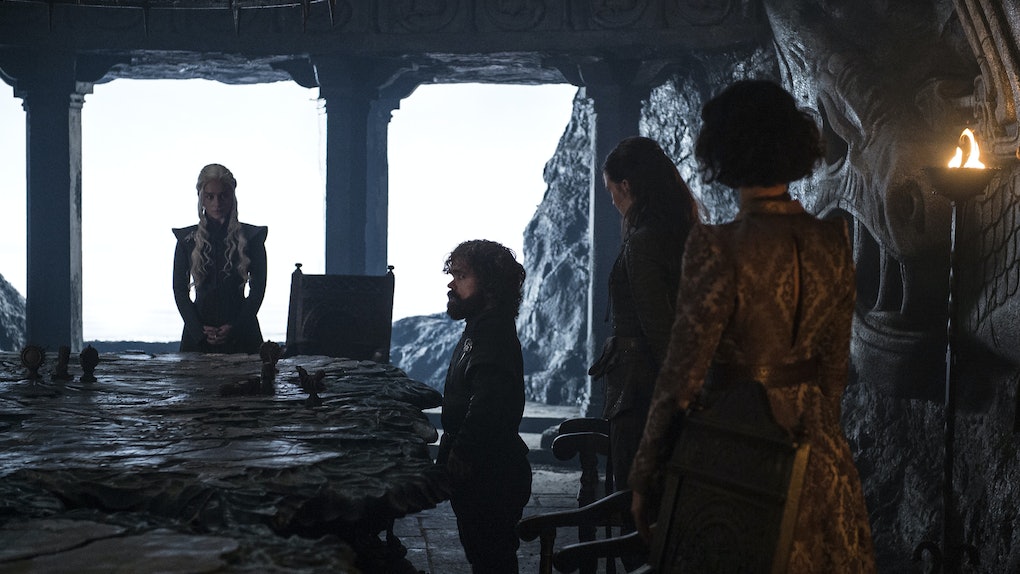 What Happened To Tyrion In 'Game Of Thrones' Season 7? Let's Breakdown The Last Season

Game of Thrones Season 7 ended back in August of 2017. It will be 594 days since that finale when the first episode in Season 8 arrives. That's a long time to remember everything that happened in real life, let alone the characters in Westeros. Now is the perfect time to go over where all the main characters stand as fans rejoin them in Winterfell. For instance, what happened to Tyrion in Game Of Thrones Season 7? The fan favorite of the family has had a long road since he last was in Winterfell in Season 1.

Born with dwarfism, Tyrion is the youngest of the Lannister family. His mother died in childbirth turning his father against him. When fans first met him in the pilot episode, his brother, Jaime found him drunk in the bed of a prostitute. Tyrion planned to visit the Wall, befriending Jon Snow on the journey.

Tyrion's been through a lot. He was tried in court twice, once for the attempted murder of Bran and then for the death of King Joffrey. In between, he married Sansa Stark at his family's orders. He was found guilty of Joffrey's death, and in response, he killed his father and fled to Essos. There, he made his way to Daenerys and convinced her to hire him as Hand of the Queen.

When Season 7 began, Tyrion had arrived back in Westeros, now as part of the Targaryen contingent, willing to make war on his sister Cersei and put Daenerys on the throne. (Cersei placed a price on Tyrion's head anyway.) When Jon Snow came down from the North to try and convince their group the real war was to the north and the Night King, it was Tyrion who spoke up for him when Dany had doubts.

Tyrion's strategies mostly backfired when it came to war. He walked the Unsullied into a trap at Casterly Rock. He didn't think Dany should engage at the Field of Fire, advice she ignored, bringing a massive win to their side. He also didn't think she should fly North to rescue Jon Snow, advice she again ignored. Jon was saved, but she lost a dragon, so maybe Tyrion was at least a little right.

The most tragic part of all this is Tyrion made the mistake of falling in love with Daenerys, who now only has eyes for Jon Snow. Season 7 ended with Tyrion dealing with the heartbreak of seeing the two of them fall in love, even as he believed he convinced Cersei to join the fight against the Night King.

As Season 8 begins, Tyrion will be faced with the reality that Cersei betrayed them when Jaime arrives at King's Landing without the promised army. He'll also not only have a disappointed Daenerys to deal with but also a disappointed Sansa. Their marriage may have been annulled, but there's still much distrust and hurt between them.

Will Tyrion live to see the Night King defeated? Or will his trust in his family be his downfall? Game of Thrones Season 8 will arrive on April 14, 2019.