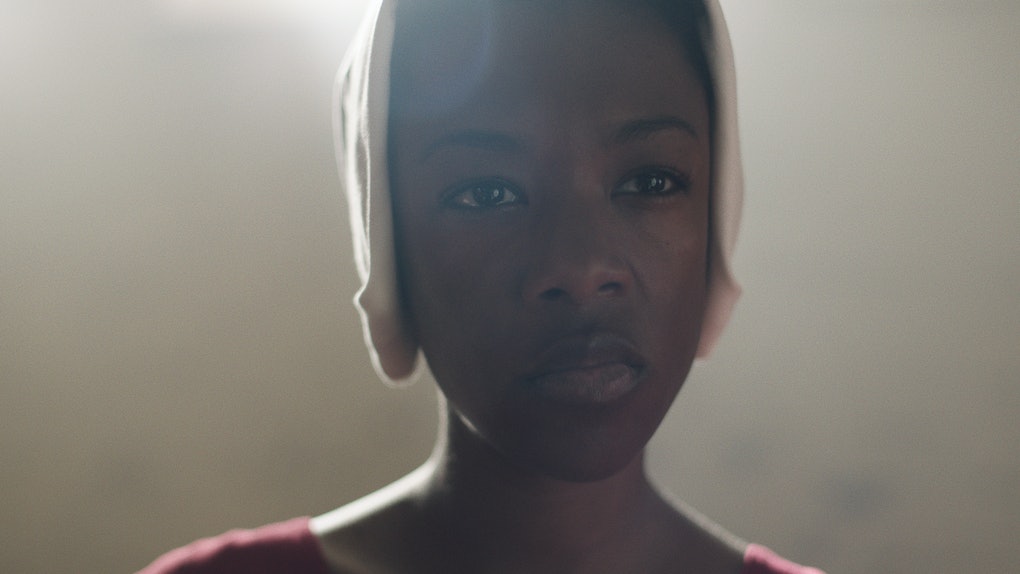 What Happened To Moira In 'The Handmaid's Tale' Season 1? Refresh Your Memory ASAP

When The Handmaid's Tale was released on Hulu last year, most of the attention went to Elisabeth Moss, who plays the title character of Offred. But while she is the main character of the novel, on-screen adaptations allow audiences to get to know other characters independently, as opposed to just Offred's point of view, which is not something afforded on the page. One of the most interesting characters is Samira Wiley's Moira, Offred's best friend from before Gilead came to be. What happened to Moira in The Handmaid's Tale Season 1? What parts of her story will be important for fans to remember when Season 2 debuts later this month?

We first see Moira from Offred's point of view, during our flashbacks to the early training and indoctrination into the cult of being a Handmaid at the Red Center, in this new society that Gilead has set up. When Offred (whose real name was June) is first dragged into the classroom and forced to submit to Aunt Lydia, Moira is already there, signaling to June to settle down, not to fight back, to stay calm. Once they're off the classroom floor and in the dorms, Moira is there with the words of wisdom to keep June from going crazy.

You want to see your baby girl again, you need to keep your f*cking sh*t together.

Why does June listen? Because Moira is a long time friend. She and Moira were BFFs together, hanging out smoking cigarettes at clubs when June first met her future husband, Luke. Moira was one of the first to know when June was pregnant. They were running buddies, and clubbing buddies, and when society began taking away their rights, they went to protests together. Moira raged against the changes in society, telling Luke it wasn't okay just because he would protect them. They had to be allowed to be independent and protect themselves. As she tells June, they're in this together:

You and me, up against the wall, baby.

But even as Moira tells June in the Red Center flashbacks to keep it together, and to keep girls like Janine from losing it, lest it becomes emotionally contagious, she herself isn't willing to put up with it. Before their time is up, she's already made a run for it, with June not knowing if she got out or not.

In the present, Offred hears terrible news from Janine on Moira's fate. Janine insists Moira was caught, sent to "The Colonies," and is dead. Even while trying to hold it together, this news sends Offred into an emotional rage spiral. She believed in Moira, she believed Moira was strong enough to get out.

Imagine June's surprise then when Captain Waterford takes her to Jezebel's (a brothel/sex club) and there is Moira, working the scene. Turns out she was captured at the Canadian border, and instead of being sent back to the Red Center, she was given the choice: The Colonies or Jezebel's. Being sensible, Moira chose the escort life.

She's also not about to put that life at risk either and refuses to join Offred in Mayday. When Offred returns a second time on a mission to find "Rachel's Package," Moira refuses to help. Offred is brokenhearted to see what her friend has become and that she must leave the brothel without completing her mission.

But Offred's presence and her words affect Moira more than she realized. At her next trip to the butchers, a parcel from Moira is slipped to her, the package she was looking to retrieve at the brothel. Meanwhile, Moira has tried escape again, murdering a government agent client and driving hell for leather to Canada. She gets over the border and to a refugee center, where Luke picks her up.

What will Moira's life be like now that's she free? Will she help Luke find June and rescue her? We'll find out when The Handmaid's Tale returns to Hulu for Season 2, on April 25, 2018.

More like this
What Happened To The Rose Family After 'Schitt’s Creek'? 6 Theories
By Rachel Varina
These Tweets About Regé-Jean Page Leaving 'Bridgerton' Are Royal Bummers
By Cianna Garrison
When Will 'Riverdale' Season 5 Return In 2021? Its Mid-Season Break Is Long AF
By Rachel Varina
Stay up to date