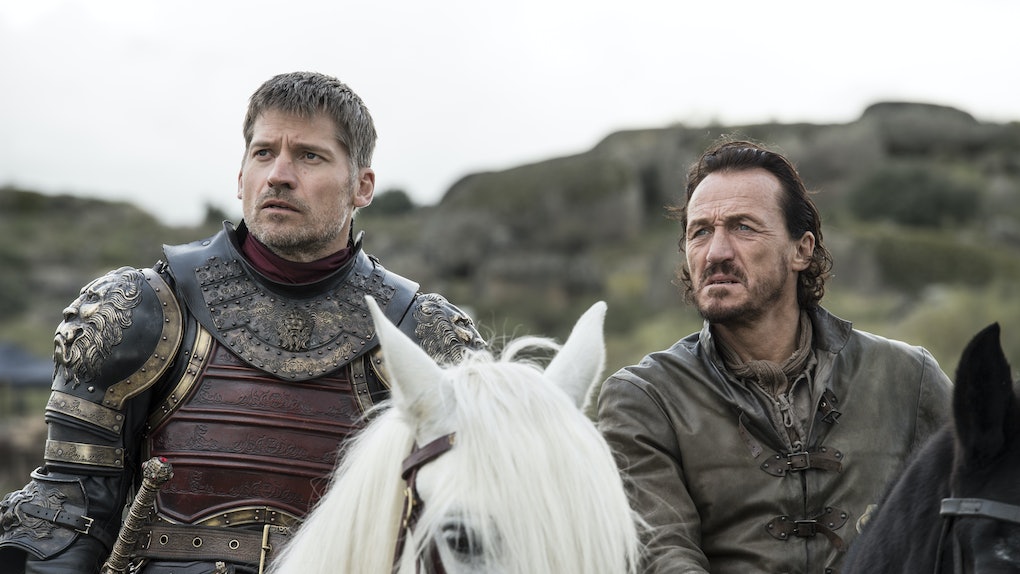 What Happened To Jaime Lannister In 'Game Of Thrones' Season 7? Let's Break It Down

It's been over 500 days since the end of Game of Thrones Season 7, a period known to the fans as "The Long Night" when there has been little to no talk of the show. For those who lived it, it's been a long time, and what happened 18 months ago has grown dim in memory. While the main plot points stand out, like the Field of Fire and Beyond The Wall, most details have faded. What happened to Jaime Lannister in Game Of Thrones Season 7? Let's go over his arc.

Jaime Lannister is the middle Lannister child, younger than his twin sister Cersei by several minutes and years older than Tyrion. He may be a Gold Cloak sworn to protect the king, but fans' first impression of him is when he pushes Bran out a tower window, crippling the kid for life, to protect the secret that he's really his sister's lover and father of their children.

As viewers learned over the seasons, Jaime isn't some evil would-be child murderer. He is faithful to his sister and willing to do anything for her. Jaime undergoes some painful experiences, including capture by the Starks and losing his sword hand, but all he wants is to get home to Cersei. When Jaime does make it home, it's only in time to see his father and his children die, one by one.

When Season 7 begins, Jaime has just arrived back in King's Landing from putting down the Tully rebellion in the Riverlands. He gets home in time to see his sister's coup come to fruition as she is crowned Queen of the Andals.

Having been stripped of his Gold Cloak status, Jaime becomes the queen's consort, and it's not long before Cersei is pregnant again. While she gestates, Jaime is sent to Highgarden to put down the Tyrells and ransack their fortunes to pay back the Iron Bank. There, he learns Olenna Tyrell masterminded the death of his son Joffrey and plotted that the blame fall on Tyrion.

On his way home, Jaime is attacked by Targaryen forces in the battle known as the Field of Fire. He attempts to take down Daenerys and Drogon in a suicide mission but fails.

However, when Daenerys Targaryen calls a truce and Jon Snow reveals the real enemy is the Night King to the north, not each other, Jaime is convinced of their sincerity. He is willing to take the Lannister army and join them, as, it seems, is Cersei. But Cersei is fickle and, within hours of them leaving, changes her mind, seeing the Night King as a useful way to rid herself of her enemies.

Stunned at the short-sighted stupidity of his sister, Jaime finally sees through her. He leaves her in King Landing and heads north alone. When Season 8 arrives, Jaime will have to break it to Tyrion that Cersei lied again and no reinforcements are coming.

Will Jaime survive to see his sister once more after the Battle of Winterfell? Fans will find out when Game of Thrones returns on Sunday, April 14, 2019.

More like this
This 2021 'Game Of Thrones' Season 8 Trailer Is So Confusing... & So Good
By Ani Bundel
Why Isn't 'This Is Us' Airing On April 20, 2021? Season 5 Is On Another Break
By Ani Bundel
6 ‘Schitt’s Creek' Spinoff Ideas That Are Simply The Best
By Rachel Varina
Stay up to date