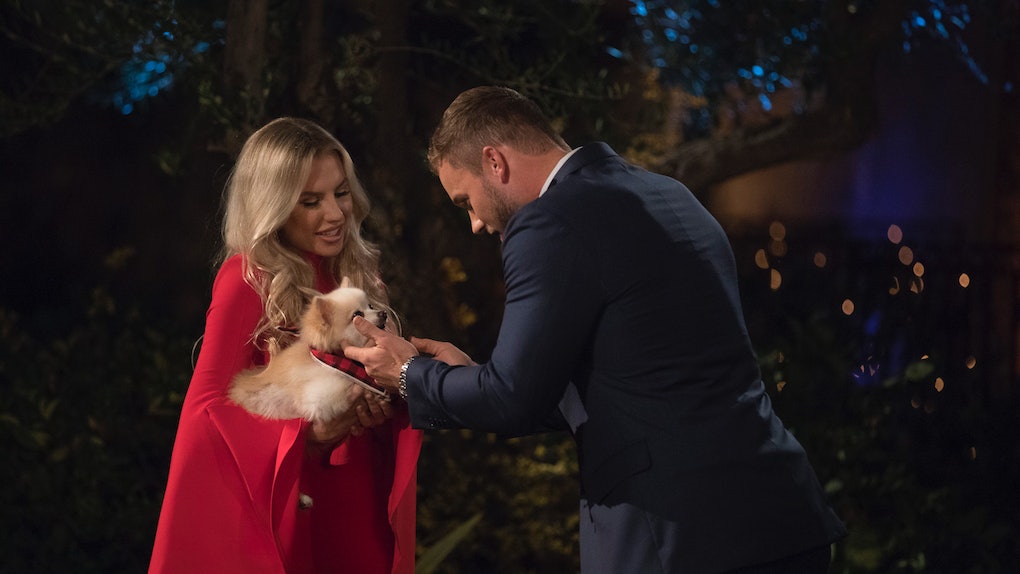 What Happened To Catherine's Dog On 'The Bachelor'? Here's The Lucy Update You Need

Despite solidifying herself as a Night One villain on Season 23 of The Bachelor, DJ Catherine Agro didn't live up to fans' expectations after she memorably arrived at the mansion with her dog Lucy. Receiving nearly no airtime in the following weeks, Catherine was sent home in Episode 3, but when you introduce a dog to an audience of millions, fans definitely want to know where the cute fuzzball is today. What happened to Catherine's dog on The Bachelor? Rest assured, Chris Harrison didn't sneak off with little Lucy when everyone else was distracted by the rose ceremony.

Billed as both a DJ and a commercial real estate agent in her Bachelor bio, 26-year-old Catherine chose to meet Colton Underwood with Lucy, her 70-year-old Pomeranian, in tow. Speaking to Cosmopolitan, Catherine spilled about why she needed her canine companion on her journey to find love, saying, "When I interviewed, I told [ABC] about Lucy, and she was invited on the show, so of course I brought her. She comes with me everywhere."

Everyone can relate to that pain of your first semester away at college when you miss your family dog more than anything, and Catherine's decision to bring Lucy along probably sparked that feeling in many of the other women. Then again, Colton's evident love for dogs definitely meant that Catherine had a bit of an edge in grabbing attention on the first night. Plus, who wouldn't want a cuddle with this dog?

Although Colton passed Lucy off to Chris Harrison after Catherine headed into the house, Lucy didn't turn up to hang with the women after roses were given out. "As far as her actually living in the house, there were restrictions, so she wasn't able to live with me," Catherine told Cosmopolitan. "But, I did get some visitations with her, so it was definitely nice knowing that she was nearby."

If anyone feels robbed of time with Lucy after her gold-star entrance, you can learn more about the pup by following her Instagram account @misslucyagro. So far, Lucy isn't posting videos of doggy stunts or reactions to her time in the spotlight, but her "mother" Catherine uploads plenty of solo pics of the dog lounging throughout the day.

Although other animals have visited the mansion before, it appears that Catherine wasn't trying to repeat past contestants' gimmicks. She claims to have never watched The Bachelor before appearing on the show, and her insistence on continuously stealing Colton away for one-on-time may have stemmed from her not really knowing how the first night usually flows. She told Cosmo:

I was interrupted every time I sat down next to him. I maybe had 30 seconds or a minute. We couldn't even finish a sentence or a topic or conversation. If you watch it, you can see, like the conversations were so short that I really just wanted to solidify the fact that you know, I’m giving up a lot of my life to be on this show and to get a shot at this, so I want to know that I’m there for him and the right reasons, and that my time is worthwhile.

Thanks to the antics of fellow contestant Demi, Catherine never became the quotable villain that live-tweeting fans hoped she would be. However, I'm sure Lucy would have much more space to roam if she and Catherine hit up the beach on Bachelor in Paradise this year. According to Cosmopolitan, Catherine is up for the opportunity, so save some of those witty tweets about a dog being a woman's best friend for this summer, Bachelor Nation!