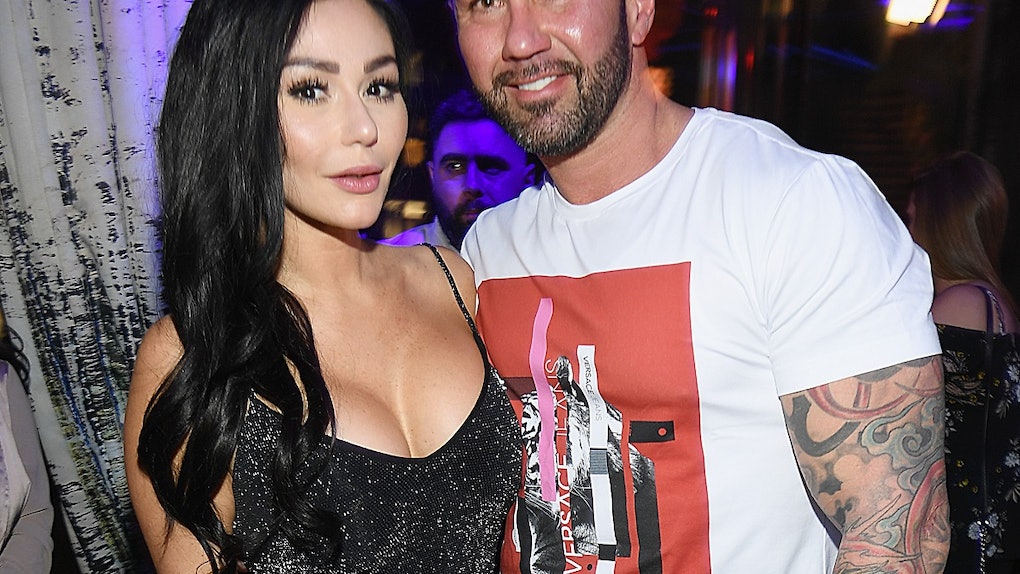 What Happened Between JWoww & Roger? Their Instagrams Are Getting Messy

Vacation is definitely over. Several months after Jersey Shore Family Vacation star Jenni "JWoww" Farley announced she was filing for divorce from husband Roger Mathews, the couple has taken to Instagram with details of an explosive fight between them. In the early hours of Dec. 14, Mathews began documenting his version of the tense disagreement with Farley on Instagram, and his video clips are pretty intense. What happened between JWoww and Roger? Since their overnight drama, the mother of two has allegedly filed a restraining order against Mathews. Both Farley and Mathews' teams declined to comment to Elite Daily.

Jersey Shore fans are no strangers to Mathews, who Farley met during the filming of the MTV reality show's first installment and eventually married in 2015. The couple has a 4-year-old daughter, Meilani, and a 2-year-old son, Greyson. Soon after Farley announced plans in September 2018 to divorce her husband, Mathews publicly declared that he would "win [his] wife back." Given his recent Instagram posts, such a mission might be on hold for now.

Early on Dec. 14, Mathews first posted an Instagram video of himself in the back of a police car, telling followers that he and Farley had a disagreement about her soon leaving the family for work. "Jenni became completely, uncontrollably emotional, like she always does, and said she was calling the police," the 43-year-old alleged. "I called the police because I knew she would make some sort of false police report, which is typical Jenni." Mathews' team declined to comment further to Elite Daily.

Mathews claimed that after he recorded a podcast with a friend, he returned home without speaking to Farley. He says police officers then woke him up at 2 a.m. and informed him that Farley had filed a restraining order against him.

Mathews proceeded to post several more videos, claiming that police were at his home earlier that night because he called them following his disagreement with Farley, 32, to warn authorities about what she may falsely report. With the restraining order now in place, Mathews says he was unable to go home or see his children. Later in the night, when Mathews was apparently at a friend's house, he shared his internal struggle in publicly sharing information. "I cannot see my children," he tearfully said. "If anyone says I was not there for my kids every day of their life...I'm always there for my children, always, and I'm not allowed to be there because somebody else is so hateful that they would do that to the father of their children."

Saying he was trying to post details out of "honesty," Mathews vowed to bring "the truth" about his situation to his fans. He alleged that Farley was negotiating a deal to discuss their divorce on Jersey Shore Family Vacation and said, "My ex cannot control her emotions in front of our children and literally turns my child against me."

Certain events transpired last night which lead Jenni to involve the authorities, as she felt it was in her best interests, and the best interests of her children to do so. Any statements and social media posts depicting anything to the contrary are intentionally designed to cast Jenni in a negative light.

Mathews reacted to Farley's post in another Instagram video, saying, "A statement was just released that, in my opinion, implies that I put somebody, whether it be my children or another person, in harm's way of some sort. That is just so mind-blowing to me to even make that suggestion. I am not the violent one... and I don't want to have to prove that." Mathews' team had no further comment for Elite Daily.

Hopefully, Farley and Mathews can sort out their conflicts.

More like this
'The Circle' Season 2 Cast's Instagrams Show Off Their IRL Social Media Skills
By Abby Monteil
Are Meghan & Harry Getting Paid For Their Netflix Show? Here's The Deal
By Sydney N. Sweeney
A Petition To Cancel Colton Underwood's Reported Netflix Show Is Gaining Support
By Abby Monteil
Stay up to date