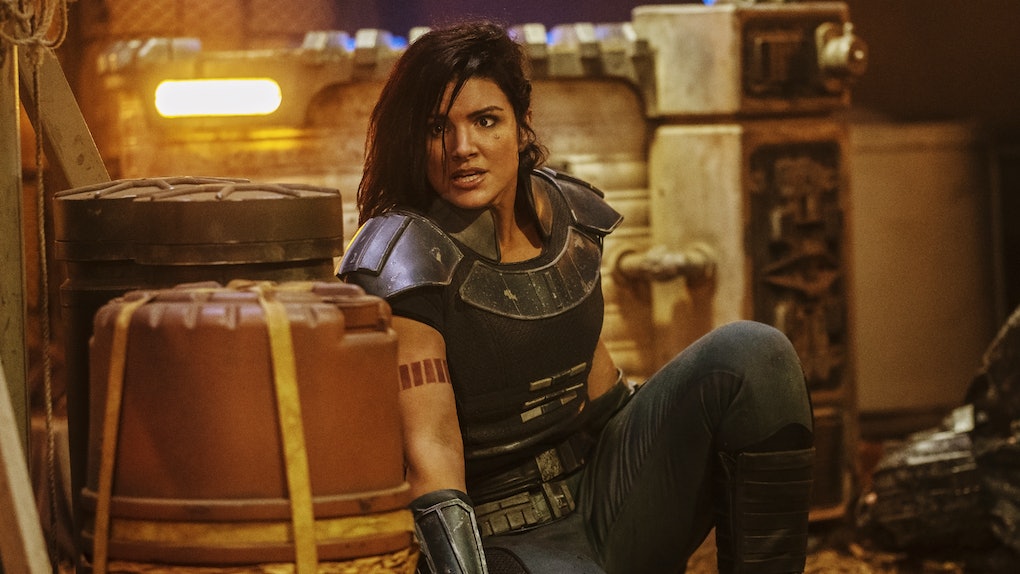 What Happened After 'Return Of The Jedi'? 'The Mandalorian' Had The Big Reveal

The conversation around The Mandalorian has mostly centered on Baby Yoda and his Mando father-figure. That's understandable, as nearly everything Baby Yoda does is adorable. Plus, watching Mando fall for the kid, to the point of risking his own life and reputation, is a heartstring tugger. But the series has another aspect to it that makes it a fascinating dive into Star Wars lore. It's the first TV series set in the early years after the original trilogy, before the rise of the First Order. So what happened after Return Of The Jedi? Warning: Spoilers for The Mandalorian follow.

Mando and Child headed for the backwater planet Sorgan as a safe haven. But former Imperial warriors had settled there, with weaponry that included an AT-ST. (All Terrain Scout Transport, the two-legged walkers seen in the battles on Hoth and Endor.) Also, Cara Dune (Gina Carano) was there. An ex-rebel shock trooper, she spent the final years of the Rebellion working with the Alliance to Restore the Republic, after the Battle of Endor in Return of the Jedi.

Even the most casual fan knows the end of Return of the Jedi, a happy ending to the original trilogy. But that was never the end of the story.

The Force Awakens revealed that thirty years later, the First Order rose up. What went wrong?

According to Dune, things went south early on.

Saw most of my action mopping up after Endor. Mostly ex-Imperial Warlords, they wanted it fast and quiet. They'd send us in on the drop ships, no support, just us. Then went the Imps were gone, the politics started. We were "peacekeepers," protecting delegates, suppressing riots. Not what I signed up for.

The Restored Republic's first act was to send soldiers to "clean up" ex-Imperial Warlords. That it was done in secret without the public's knowledge, instead of putting them on trial, is the first red flag.

The idea of "peacekeepers" isn't terrible, and delegates need security. But how much, and from what?

It's the "suppressing riots" that should make everyone sit up and take notice. Game of Thrones taught viewers the people don't give a good goddamn who rules anything. They want a good harvest, healthy livestock, and a functioning economy. When those things disappear, those in charge are blamed.

The Empire didn't collapse because people drank secret toasts to the health of the Organas, or prayed for Leia's ascent to the head of the Republic. It fell because Darth Vader was too worried about the Dark Side to pay attention to the things that would keep his subjects from overthrowing him.

Now it seems his children may have made the same mistake. If Dune's account is anything to go by, the seeds of the First Order were sown in the first days of the Empire's fall.