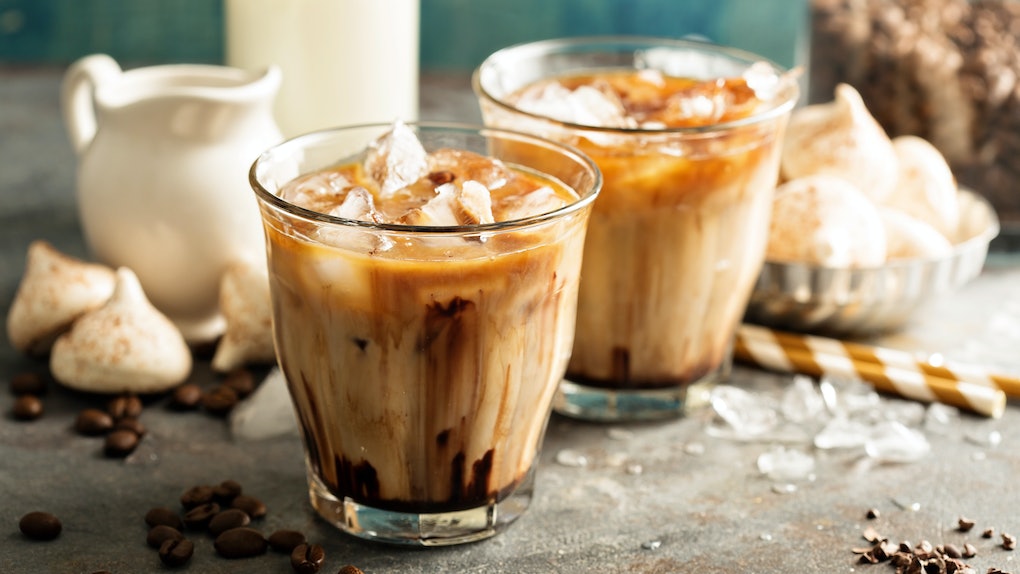 What Does Whipped Coffee Taste Like? Dalgona Coffee Has A Strong Flavor

Your at-home caffeine routine is about to get a jolt, thanks to a viral new coffee recipe making the rounds on TikTok. You've probably seen the photogenic creation on social media and wondered if it tastes as good as it looks. So, what does whipped coffee, aka dalgona coffee, taste like? Ready yourself for a strong flavor when you make the new sip.

On Tuesday, March 10, TikTok creator @iamhannahcho appeared to kick off the trend by sharing a recipe for whipped coffee. While the idea of frothy cream-inspired coffee is nothing new (it's called "dalgona coffee" in South Korea, and versions of the treat have become mainstays in countries like Pakistan and India as well), it's taken off on the social media platform due to its short ingredient list and totally 'Gram-worthy aesthetic.

An Elite Daily editor who made it at home says the drink had a "really strong coffee flavor," which is never a bad thing in my book. She recommends using the full amount of sugar suggested in the recipe if you don't want a bitter drink, as the coffee notes can be overpowering. While many of the people on TikTok made the drink by pouring it in layers to create a cool visual effect, she recommends just mixing it all together with your choice of milk for a better-tasting end result (after snapping a pic of the whip on top for Instagram, of course).

"It looks pretty when separated with the whip on top, but in my opinion, it tastes so much better when it’s all combined. It basically tastes like a super creamy latte," she says.

If this sounds like something that's right up your alley, you're in luck, because you don't need barista-level skills to whip up some whipped coffee at home.

To start, you'll want to put an equal amount of instant coffee powder, sugar, and hot water in a bowl (It looks like most people are using about 2 tablespoons of each ingredient, but you can adjust according to how much coffee you want). Next, you'll want to whip all three ingredients together using a whisk, blender, or a milk frother until stiff peaks form.

Lastly, you'll want to pour about a half-glass of the milk of your choice, layer the whipped coffee mixture on top, and sip away. If you want to do what my editor did and make a variation on the OG TikTok recipe, you can also mix the two together for a more blended drink.

You can always experiment with the recipe. Some TikTokers have gotten creative by swapping out the instant coffee for matcha powder or cocoa powder, or even just dusting some cocoa powder on top. With such a simple recipe, it's easy to get creative and make it your own.

This article was originally published on March 23, 2020

More like this
What Does Twizzlers' Mystery Flavor Taste Like? It'll Keep You Guessing
By Cianna Garrison
40 Wine Puns For Captions, To Give Your IG Feed A Taste Of The Good Life
By Jasmine Vaughn-Hall
Baskin-Robbins' May 2021 Flavor, Non-Dairy Strawberry Streusel, Is An Oat Milk-Based Treat
By Lara Walsh
Stay up to date