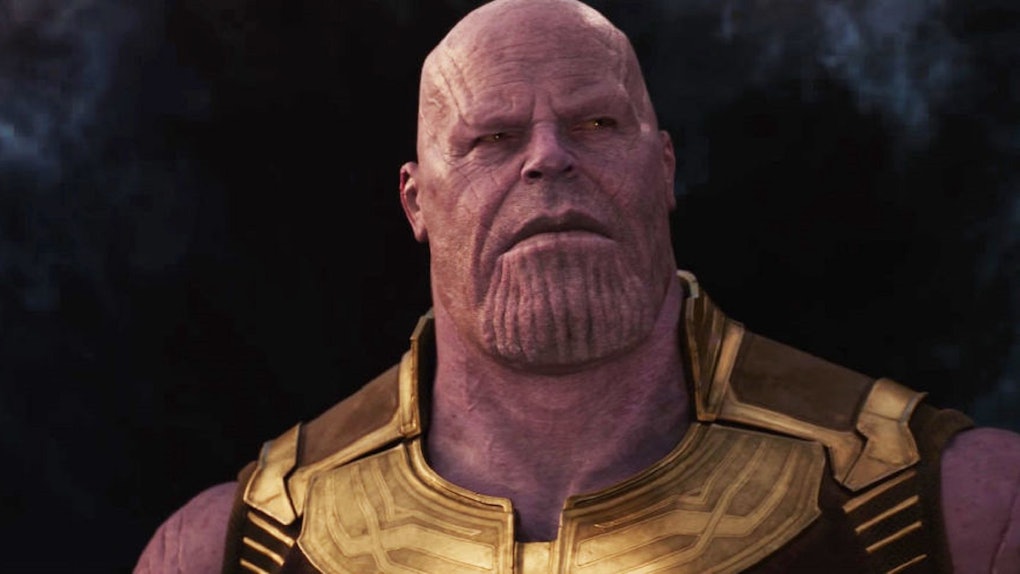 What Does The 'Avengers: Infinity War' Post-Credit Scene Mean? Here's Your Official Breakdown

Spoiler alert: Spoilers for Avengers: Infinity War follow. As fans predicted, Avengers: Infinity War ended quite bleakly, with the majority of its superhero lineup falling victim to Thanos' power. Several of them gradually vanish into thin air once Thanos retrieves all six Infinity Stones. Before the screen fades to black at the end of the film, only the original Avengers seem to remain: Thor, Iron Man, Captain America, the Hulk, and Black Widow, with Hawkeye's fate unknown as he's seemingly off the grid. James Rhodes/War Machine and Black Panther's Okoye are also still alive. Although the traditional post-credit scene is similarly upsetting, it did carry a trace of hope for the next Avengers film, so what does the Avengers: Infinity War post-credit scene mean?

Unlike other Marvel movies, Infinity War didn't have a mid-credits scene, which makes sense given that the whole point of its ominous ending was to set up a cliffhanger for the 2019 sequel. Audiences had to stick around until the very end of the credits for a peek at what to expect next, eventually seeing Nick Fury and Maria Hill driving together in New York. Maria is unsuccessfully trying to reach Iron Man, who is now alone after Doctor Strange, Peter Quill, Drax, Mantis, and Spider-Man disintegrated around him as an aftermath of Thanos' Infinity Stone power. In New York, a car screeches across Fury and Maria's path, but when they leave their car to investigate, no one is in the other vehicle.

Around them, the city is suddenly facing disaster once again, but this is different from the typical apocalyptic conditions the gang faces. Maria Hill quickly vanishes, as well as random people nearby on the street. When Fury realizes what's happening, he rushes to his car to pick up a device, but begins to disintegrate before he carries out his task on it. The machine falls to the ground as Fury disappears, and the audience sees that it is sending a message. The signal goes through and a star symbol appears, representing the Avengers' last hope in defeating Thanos and bringing back their friends.

Now, even if you consider yourself a hardcore Marvel movie fan, the meaning of the star still may have gone over your head. If you keep up with Marvel movie news and happen to read the comics, you were probably the one in your movie theater telling confused fans what it meant. The star perfectly matched that on superhero Captain Marvel's uniform, essentially confirming that the new hero will be introduced in the movie franchise just in time for Infinity War's sequel.

The massive hint that Captain Marvel is called in to help the Avengers even fits with Marvel Studios' upcoming movie schedule. Seeing as most of its heroes have vanished into thin air and the others are left wondering what to do, the production company can't exactly release new standalone films for old characters in between now and Avengers 4.

Oscar winner Brie Larson is tagged to play the title role in the Captain Marvel movie, which is reportedly hitting theaters on March 8, 2019. Directed by Anna Boden and Ryan Fleck, the film is expected to follow Captain Marvel's alter ego, fighter pilot Carol Danvers, and her superhero adventures through the 1990s.

Samuel L. Jackson is also confirmed to play a younger Fury in the film, and despite how little else we know about the movie, Jackson has already spilled on what fans can expect from his character in Captain Marvel, telling The AV Club:

But we're going back now, and I meet Captain Marvel in more of an origin story. You'll see Nick Fury with another guy's face, somebody that's got two eyes, so that's a whole big deal. You'll see. It's prior to the eye injury, no eye patch.

With the sequel to Avengers: Infinity War scheduled for May 3, 2019, the timing of Captain Marvel meshes perfectly with the Marvel world, with the character's introduction playing out soon before she seemingly is the Avengers' saving grace in the Infinity War sequel. No surprise, but it looks like a woman will literally save the world in the next Avengers film.