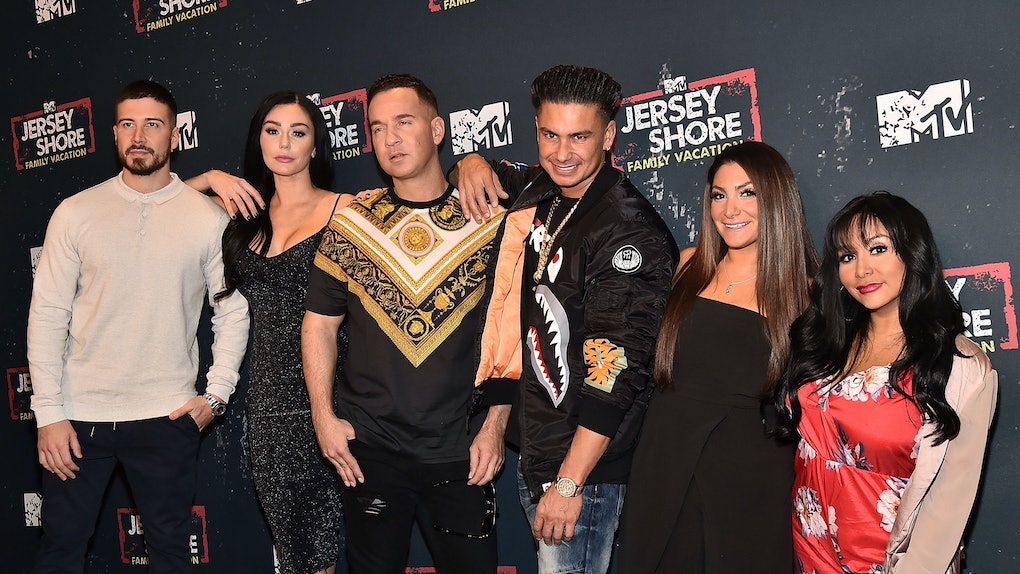 What Does G.T.L Mean? 8 'Jersey Shore' Terms All Fans Should Use In Their Daily Lives

When Jersey Shore first premiered in 2009, it seemed like the group of guidos and guidettes was speaking in a totally different language. Talk about grenades, smushing, and G.T.L. filled every episode, and new terms seemed to be popping up all the time. Now that Jersey Shore is back with Jersey Shore Family Vacation, you may need a refresher on the cast's unique vocabulary. What does G.T.L. mean, again? And what's the difference between "T-shirt time" and "the shirt before the shirt?" Consider this your ultimate Jersey Shore dictionary.

But first, a quick reminder: The cast of Jersey Shore was (and still remains) hilarious, but no one ever accused them of being too polite. For all the amazing terms that you should incorporate into your daily life, there's a few that are kind of rude and a little sexist. Take "grenade," for example: The cast, both male and female, used this term to describe unattractive women in the club. This definitely wouldn't fly in 2018, and it seems like the cast realized this, too — in Jersey Shore, "grenade" was thrown around right and left, but in Jersey Shore Family Vacation, the roommates don't say it as much.

That being said, the majority of the Jersey Shore dictionary is pretty harmless. These people just want to party, right? And naturally, their vocab will take your next night out to another level. Get ready to kick down doors all over the club, because these Jersey Shore terms will make your daily life so much better.

This one is just plain iconic. "Gym, tan, laundry" isn't just a to-do list, it's a way of life. Once they sobered up after a night out, the men would complete their G.T.L. routine: do a few bicep curls while looking in the mirror, sit in the tanning bed, and then get their laundry done. If you want to look F.T.D. (I'll get to that), you've got to be religious about G.T.L. In Seaside Heights, it's all about the acronyms.

2. The Shirt Before The Shirt

"T-Shirt time" gets a lot of recognition as Jersey Shore's main going out term, but don't forget about the step before T-shirt time: putting on "the shirt before the shirt". As Pauly D reminded his roommates, you can't put on your going out shirt until you're practically halfway into the cab, so until then, you have to wear "the shirt before the shirt." Honestly, this one is so helpful — who hasn't spilled something on their outfit while pregaming? Let's all agree to wear different outfits while get ready and then change right before the Uber comes.

OK, now it's "T-shirt time." When the cabs were on their way, it was finally T-shirt time, and the guys in the house would change into their going out shirts while singing, "It's T-shirt tiiiiiiime." As the show went on, the T-shirt time routine became more extravagant, and fans ate it up.

I'm not sure if guidos in Jersey actually say "smush" to describe sex or if MTV just decided that the term was family-friendly and asked the cast to say it, but regardless, I'm obsessed. The roommates shared rooms in the shore house (and on Jersey Shore Family Vacation) so if someone wanted to bring a guy or girl home, they had to use the "smush room," which obviously also had a camera in it. My thoughts and prayers are with whoever had to clean those sheets. "Smush" is both funny and very, very graphic, which definitely makes it even more hilarious. Consider this my petition to add "smush" to the Merriam-Webster's dictionary.

A "backpack" is basically a stage-five clinger, and the term started during a classic Sammi-Ronnie moment. At the club, Sammi would always hang around Ronnie and not branch out on her own, so Deena called her a "backpack" clinging to his back. Is some guy all over your friend at a bar? Is one of your friends still stalking her ex on Instagram? Call out that backpack!

In the show's entire six-year run, was there ever a point when Pauly didn't look "F.T.D." — fresh to death? The answer is obviously no, because his fashion sense is incomparable (OK, maybe not the Ed Hardy shirts, but you live and you learn). Pauly always went to serious lengths to make sure his hair, shoes, and clothes looked fresh, and you've got to respect him for that.

The Jersey Shore cast practically lived on the dance floor, so it's no surprise that a fair amount of drama took place there. A "robbery" is when someone takes a guy or girl away from another person, but it's especially bad when it happens on the dance floor. Mike was pretty sleazy in those early seasons, and I can remember a time or two when he swooped in and started talking to a girl Pauly had been dancing with. Classic robbery, man.

8. Kicking The Door Down

This last Jersey Shore term is a newer one: it came from Vinny, the Keto Guido, in the first episode of Jersey Shore Family Vacation. Fist pumping is so 2009, so now, Vinny has a new move where he pretends to be locked out of a door, and when the beat drops, he kicks it down. Get ready to see this move at bars all over the country, because if Vinny does it, you know it's hot.