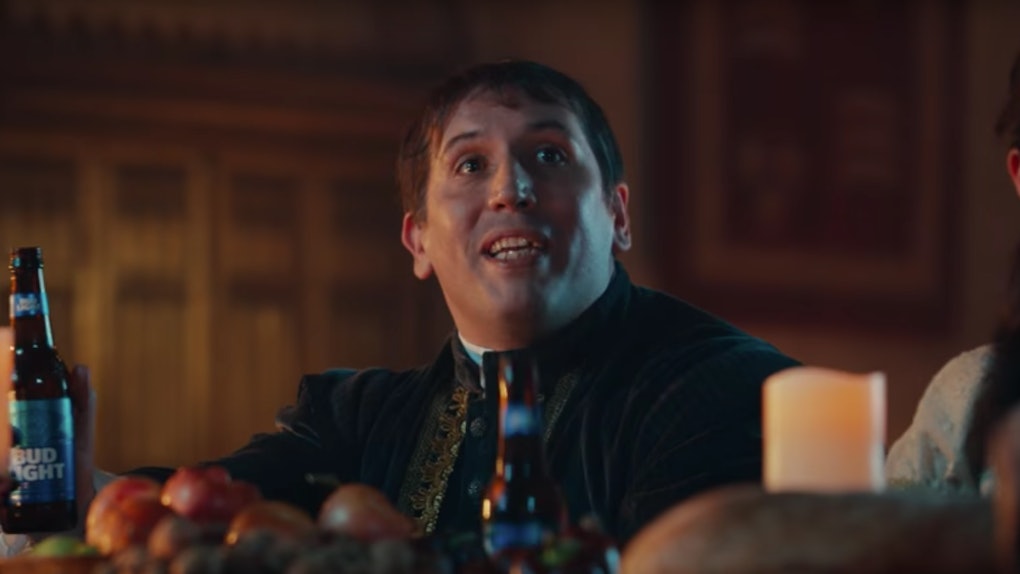 What Does "Dilly Dilly" Mean? The Bud Light Super Bowl Commercial Has Everyone Talking Nonsense

There's a phrase you're likely to hear more and more as Super Bowl Sunday draws near: Dilly Dilly. If you're wondering what does "Dilly Dilly" mean, don't worry, you're not alone. After all, those two words meant literally nothing not too long ago.

That is, before last fall, when Bud Light debuted a commercial titled "Banquet," which turned "Dilly Dilly" into a salute recognized nationwide.

The commercial takes on a medieval setting, in which guests of an apparent king bring gifts to his table. Each gift — a pack of Bud Light, of course — is met with a cheer: "Dilly Dilly!"

Fast forward five months, and Bud Light has released a whole series of the medieval "Dilly Dilly" commercials, each one seemingly making the phrase more catchy than the last. Like most catch phrases that originate on TV or in movies, Dilly Dilly made its way to social media, becoming a top internet meme.

The popularity of "Dilly Dilly" hasn't made it any more defined, though. In fact, the opposite has happened. Each new Bud Light commercial has featured "Dilly Dilly" being used in a different context, making it applicable in pretty much any situation.

"'Dilly Dilly' doesn't mean anything," Miguel Patricio, the Chief Marketing Officer at Bud Light parent company Anheuser-Busch InBev, said in November at a conference hosted by Business Insider. "That's the beauty of it. I think that we all need our moments of nonsense and fun. And I think that 'Dilly Dilly,' in a way, represents that."

Dilly Dilly is a salute, catch-phrase, greeting, rallying cry — and pretty much whatever you want it to be — all in one. In other words, it's the greatest form of American slang, the type which can mean literally anything, depending on the context you use it in.

Now, back to the Super Bowl. With the big game coming up, Bud Light has been working on a trilogy of new Dilly Dilly commercials. The first, "Wizard," was released just before the new year. The second, "Ye Olde Pep Talk," aired on Sunday, Jan. 21, during the NFL conference championship games, which decided which teams would go to the Super Bowl. The third will air during the Super Bowl itself, on Sunday, Feb. 4.

Whether or not the Super Bowl's Dilly Dilly commercial flops or not, Bud Light has already succeeded in making the phrase a part of pop culture.

"When people are using the campaign as a ‘cheers’ among friends or putting ‘Dilly Dilly’ holiday lights on their lawn, we know that we’re onto something really cool," Andy Goeler, the VP of Marketing for Bud Light, told Ad Week. "This gives us the freedom to continue to use this world to connect with culture and most importantly have fun and a sense of humor, which is what our brand is all about."

Actress Olivia Culpo uses it on Twitter. Pittsburgh Steelers quarterback Ben Roethlisberger uses it while spitting all that gibberish quarterbacks usually say before hiking a ball. And football fans all over use it to celebrate clutch plays.

All this popularity has built up for Bud Light, despite the fact that the company launched the campaign with low expectations.

"To tell you the truth, we never expected this to be so successful. It didn't test that well. We did that ad, actually, because of the new season of Game of Thrones coming, but when we tested, it didn't test that well," Patricio told Business Insider. "We said, 'Consumers will get it.' And especially with repetition. We have a chance here for this to become big. So, we went against the research and we gave a chance to 'Dilly Dilly' and we are so happy!"