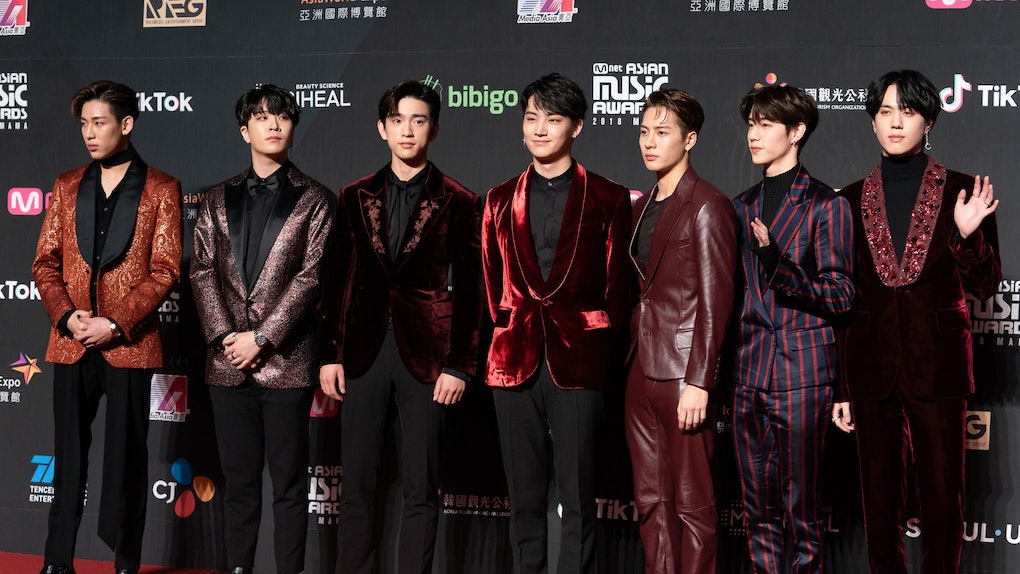 What Do GOT7's "1 Degree" Lyrics Mean? The Song Is About Feeling Unstable In A Relationship

GOT7 just released their new album Spinning Top, and Aghases everywhere are more excited than they’ve been in quite some time. The group’s new album is full of bops, including one called "1°" which fans are anxious to dive deeper into. So, what do GOT7's "1°" lyrics mean? Well, they’re all about feeling unstable in a relationship and praying that things don't change.

Before I delve into the lyrics to "1°," let’s talk first about the group’s new album. GOT7’s Spinning Top album was released on Monday, May 20. The album precedes GOT7’s Keep Spinning world tour, which will kick off on June 15 and take the group from Seoul, Korea to Mexico City, Mexico. In between, they’ll also be visiting the United States and Canada. According to Billboard, GOT7 will also be heading to South America, Europe, and Australia in the second half of the year. For now, though, fans will just have to snag tickets to those first few North American shows.

So, there’s plenty of opportunity for fans to hear the group’s new music, including "1°."

And, of course, GOT7 fans will want to learn the lyrics to the song before they hit any of these tour dates. But more importantly, they should know what those lyrics mean — because all of GOT7's songs are so meaningful.

Luckily, the Aghase Twitterverse has you covered. So, here’s a look at what the lyrics actually mean according to a translation by @iGOT7_MarKP.

Don't let go, not even for a moment

Hold me, Hold me, Baby

Can you endure it just a little bit more

Inside the hidden light, darkness comes inside

Please look at the trembling me

Will you hold my hand?

But it's right before it explodes

Stops afraid that it will be swallowed by darkness

Look at me I'm afraid

Look at me I'm afraid

Pray to not tilt, not even 1 degree

24/7, afraid that I will fall because of that 1 degree

Can't focus, not even at work

The angle of how you look at me

The temperature of the words you say to me

I hope everything will stay the same

Becomes light and come save me

From the deep darkness

You can listen to the whole song below!

This song is so relatable for anyone who's ever been in a relationship that's so good, it felt almost too good to be true. Then you end up feeling insecure over and just want to know for sure that nothing will change.

More like this
Is Saweetie's "See Saw" About Quavo? The Lyrics Are Brutal
By Corinne Sullivan
These Tweets About BTS' 'Bang Bang Con 2021' Sum Up The Epic Performance
By Cianna Garrison
These Tweets About Taylor Swift's "Mr. Perfectly Fine" All Ask 1 Important Question
By Sydney N. Sweeney
Stay up to date