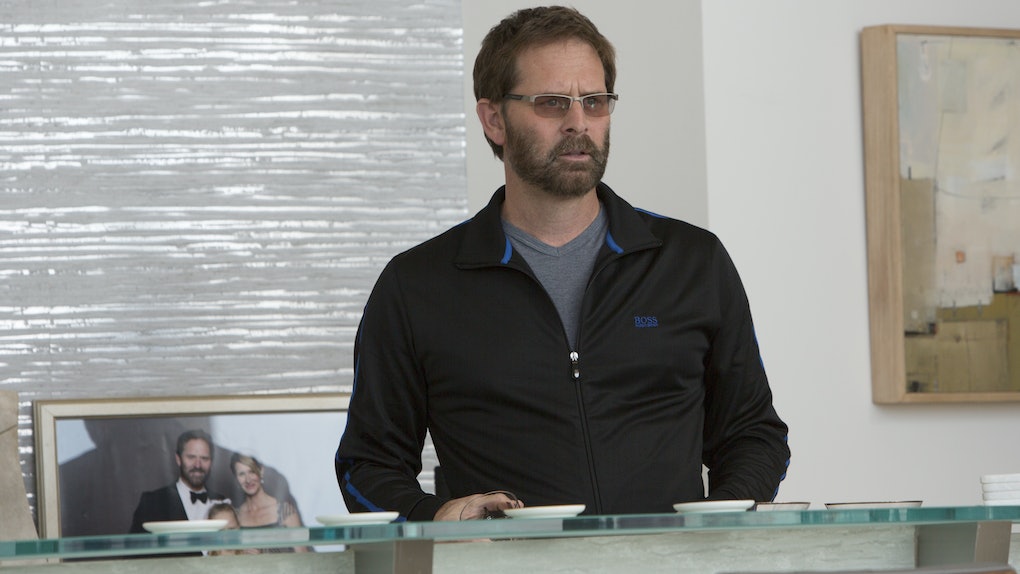 What Did Renata's Husband Do On 'Big Little Lies'? Gordon's Arrest Is Shaking Things Up

When Big Little Lies Season 2 returned at the beginning of June 2019, the "Monterey Five" were all at the top of the world, or at least faking it well. (Well, in Bonnie's case, not faking it well, but that's for another post.) Renata Klein certainly had everything going for her, posing for a magazine photo shoot in a Roland Mouret burgundy lamé “Zodiac” wrap gown that retails for $5k and Christian Louboutin “Louise X” black suede thigh-high boots that cost another $2k. But downstairs, her husband hid out looking ill. But what *did* Renata's husband do on Big Little Lies? Warning: Spoilers for Big Little Lies Season 2 follow.

Viewers found out pretty quickly at the top of Episode 2 that Gordon was hiding a massive secret from Renata, even as she posed away poolside, in an ostentatious show of wealth. The truth is, it's all a surface level. Like the Lannisters from Game Of Thrones, there's no longer any money in the Klein family to support this image. Gordon lost it all.

Moreover, he didn't just lose all the family's money and assets in a deal gone bad. He did it in an illegal deal gone bad, one the FBI is onto, as Renata discovers, to her horror ,when he is arrested one morning on their way out of the local coffee shop.

In Gordon's case, what he did is something known as "insider trading." As he explains to Renata over the phone from his jail cell, he and his buddies made a short sale on some stock. But then Gordon went a little further, doing some buying and selling on knowledge only he had. Apparently, the Securities and Exchange Commission (the SEC) noticed.

The SEC only has civil enforcement authority, not criminal, so when its investigation catches someone doing a financial crime, they refer to state or federal prosecutors. Hence why Gordon was arrested by a mix of the FBI and the local cops.

This is a huge problem, not just for Gordon but Renata as well. Though she didn't sign anything, their finances are co-mingled, so his fraud is her fraud. Of course, Renata is totally freaked out over the FBI seizing her assets and laptop and so forth, due to the whole Perry situation, but in reality, the FBI is just doing due diligence here. For all they know, the husband used his wife's computer to hide what he's doing.

It's another reminder of how much these women's positions are viewed through their husband's actions in the eyes of the law, and how much a man's stupid decision can wreck a woman's life, even when that woman is as high-powered and wealthy as Renata is. Or was. As she screams at Gordon, "I will not not be rich." Sadly, the patriarchy says she doesn't get a choice in the matter.

More like this
The 'A Million Little Things' Season 3, Episode 10 Promo Is So Disturbing
By Abby Monteil
Who Is Daniel Tiger On 'This Is Us'? Randall's Visit To 'Mister Rogers' Was A Big Deal
By Ani Bundel
The 'This Is Us' Season 5, Episode 14 Promo Teases Another Beth Story
By Ani Bundel
Stay up to date