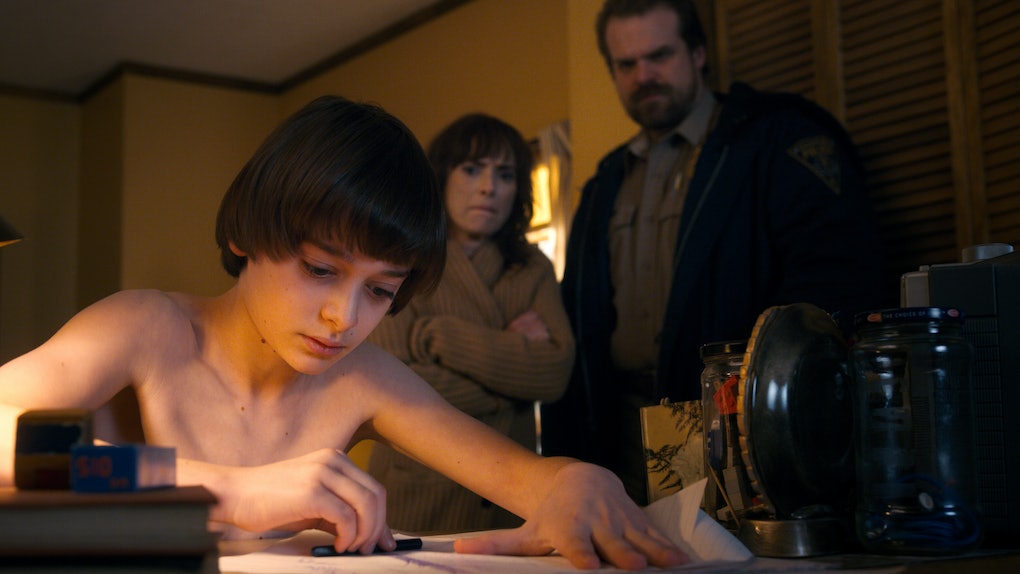 What Are The Tunnels On 'Stranger Things'? They Have A Huge Connection To Hawkins

Stranger Things Season 2 promises us more more information on the Upside Down, along with new scientists exploring it. But when Hopper walked into the Hawkins Lab, he discovered the new Dr. Owens was merely burning back the crack between worlds. It wasn't until he insisted they test the soil on the desiccated farms that we discovered the Upside Down's tunnel system. But what are the tunnels on Stranger Things? And where did they come from exactly? Please note: This post contains spoilers for Stranger Things Season 2.

When Will Byers was taken over by the Shadow Monster, the first visions he had weren't of the Upside Down as we know it. Instead, they looked a little bit like an outtake from 1980s Doctor Who, with a blue tunnel that he seemed to be falling down every time he closed his eyes. These same tunnels Will was seeing turned out to be a path that was mapped out all across the town, burrowing underneath this quiet suburb.

Meanwhile, over at the lab, Owens and his compatriots were realizing that the dirt that came from these decaying farms had Upside Down-like properties, suggesting that Hopper was very right: Whatever was happening to the pumpkin crops was emanating from their experiment.

But I don't think anyone was prepared for what Owens and company found when they dug down beneath where they had been burning away at the mirror universe this whole time. Every time Owens and company burned the Upside Down tendrils back to their opening, the opening had responded by growing downward... growing until it was a wound-like opening that stretched nearly a mile down.

From that opening underground, the Shadow Monster was tunneling. It was cutting through the earth, creating this enormous system that encompassed the entire town of Hawkins.

The Shadow Monster had tunneled outward, spreading the Upside Down through those tunnels into our world. As he did, he killed everything living above ground. (As Will noted, that's what the malevolent creature wanted to do — kill everything.)

But since there was a mile of dirt above that, this meant humans were, for the moment, safe. Instead, what the Shadow Monster could infect were the root systems of all the plants, the crops, and the trees. That's why the first things to signal what was happening were the pumpkin patches.

Once the tunnels were complete, creatures that lived inside the Upside Down could start traveling through them, including Demogorgons, who then spawned baby Demogorgons, probably hosted by creatures that would naturally paw and dig into the ground: dogs. Thus, the Demodogs were born, and began patrolling the tunnels in packs, called to wherever the Shadow Monster wanted something killed, or where they could find their next meal.

Once the split between worlds was forced shut, the Shadow Monster would no longer be able to tunnel under Hawkins. His control of the Demodogs would be severed, killing them instantly. It was what Brenner should have done last year when Eleven accidentally opened the passage to this mirror world: close it again, trapping the monsters on their side, where they belong.

Once that's done, they could no longer sense Hawkins or attack it in our universe.

That closing shot in the epilogue maybe suggests we shouldn't be so sure.