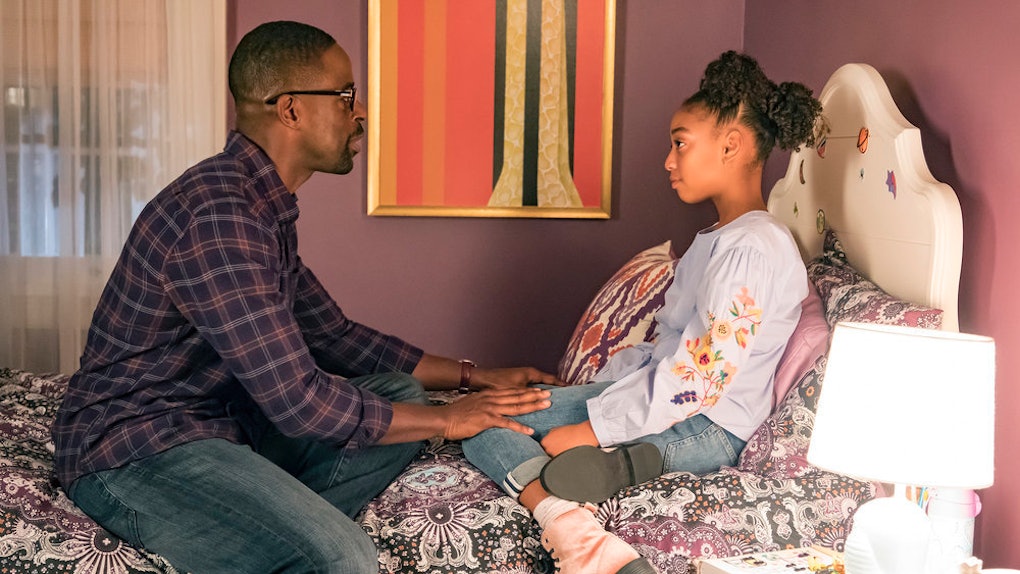 Tonight, This Is Us didn't just give us one twist, it gave us two. One of them was the little boy Jordan, who fans have assumed all this time would be the Pearson's next foster child. Turns out that's not the next kid Randall and Beth will take in. We watched as Tess told Randall she liked the fact their family fostered, and then it flashed straight to the counselor looking over Jordan. "Wow," I thought, "That counselor and Tess look alike. Hm, maybe Tess will grow up to...." Of course, my thoughts were interrupted and the show was one step ahead. That *was* Tess, and we got our first glimpse at future Randall on This Is Us.

Now that we're done with the past and with Jack's mystery, it's time for the show to go full Lost and start flashing forward.

There was an interesting quote from Dan Fogelman this past week in Entertainment Weekly. Speaking about this Super Bowl episode, he said:

Next week’s episode was one of a couple of episodes that were part of my initial pitch to NBC. Many of the episodes were for future seasons upcoming, but this was one of the first ones. We’ve been working at it for two years, I just completed it.

"Many of the episodes were for future seasons upcoming," So Jack's death was just the first massive plot point. But now it's time for the show to pull back the curtain and reveal the next stage has been sitting right in front of us since the mid-season finale back in December.

So Jordan is the first of the "flash-forward" series. Randall told his daughter he was going to meet her at her fancy office every week, and they would go to lunch and she would tell him everything. And apparently that is really how it played out. Her fancy office might actually be a social worker's office, but that's good enough for him.

And while we've had the reveal of "Old Randall," if we fans know this show (and, face it, we fans know this show) this is only the tip of the iceberg. Old Kevin? Old Kate? Old Toby? Old Beth? These are all possibilities in the future... until we learn which one's death is the new "no fly zone."

Fans were ecstatic. For now, it looks like the future (which is what, 2037 or so, maybe?) is an OK place, where Tess is still Randall's Number One.

Some fans were amazed this had been sitting in front of us the hold time, and we were completely fooled. (I admit even after I thought "wow, that social worker looks like grown-up Tess" I didn't actually think it *would be* grown-up Tess.)

For many, there's a real satisfaction in starting out on a journey of flash forwards to complement the present and the flashbacks, though like Lost, I can't help but wonder if one is going to give way to the other.

Some were just delighted to see that Tess turned out looking so good, and doing something Beth and Randall would be proud of. (And which their choices helped inspire.)

There's also a relief to seeing this, that there's a plan beyond Jack Pearson's death. one of the things that worried be most about this is that when you solve a puzzle box mystery too soon in a series, it can kill the show. (Twin Peaks, anyone?) But seeing that there's been a whole set up going, and that Fogelson has several more of these types of blockbuster episodes planned in future seasons suggests that the show is in very good hands, and will be around a long time to come.