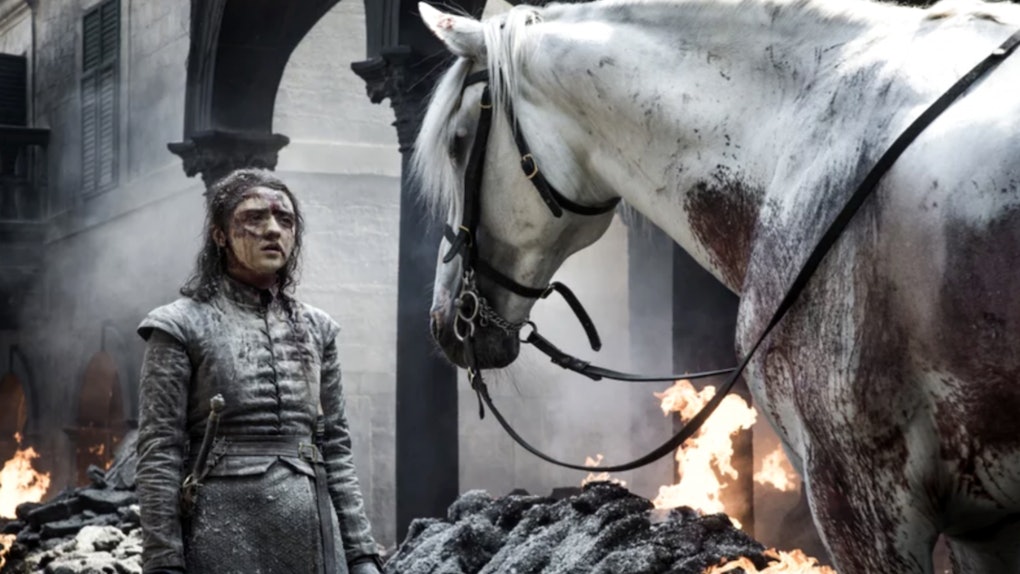 Was Bran Arya's Horse? This 'Game Of Thrones' Theory Will Blow Your Mind

The penultimate episode of Game of Thrones saw a whole lot of death. The Battle for King's Landing was an epic, fiery fight for the Iron Throne, and many of the series main characters were forced to duke it out in a near-apocalyptic setting. But, one key character was missing from the action, or at least it seems that way. One fan theory is saying that the missing character may have actually shown up in King's Landing in a very surprising way. Fans are wondering: Was Bran Arya's horse? Warning: Spoilers for Season 8 of Game of Thrones follow.

In Game of Thrones Season 8, Episode 5, Daenerys went full Mad Queen on King's Landing and commanded her dragon Drogon to set the city ablaze. More than half the episode was devoted to watching a number of main characters do their best to survive in the wreckage. While many don't make it (goodbye, Cersei and Jaime), Arya is one of the few to still be alive at the end of the episode. It makes sense that Arya would make it, since she's basically spent the entirety of the series training to survive. But still, that dragon fire is terrifyingly lethal so it's really impressive that Arya doesn't die from any one of the explosions she endures. Anyway, as the dust settles, Arya wakes up after apparently having been knocked out. She looks around and spots a white horse, which mesmerizes her. She gingerly pets the strange horse before mounting it and riding off, away from the wreckage. Some fans think that the horse might not be so strange.

Fans took to Twitter after Season 8, Episode 5 aired and brought up the idea that that horse might have been there for Arya on purpose, because the horse was Bran. Bran has the ability to warg into other creatures, like audiences saw him do during the Battle of Winterfell when he became a raven for a brief period. So, the logic is that he might have appeared as a horse to help rescue his sister.

Fans believed that Bran and his powers as the Three-Eyed Raven would play a much larger role in the final season than they have so far. So if Bran were using his magic to warg into the horse, it would probably satisfy fans' desire to see him be more active and play a larger role in the final episodes of the series. Instead of using his magic, Bran has mostly been sitting in his chair like a moody teenager and issuing out mysterious zingers to everyone around him. So, saving his sister would definitely be a redeeming turn.

With only one episode of Game of Thrones left though, there isn't a lot of time to wrap up every storyline on the show. There's a good chance the finale episode won't even acknowledge Arya's horse, and fans will be left to debate its true identity forever.

The series finale of Game of Thrones airs Sunday, May 19 at 9 P.M. ET on HBO.