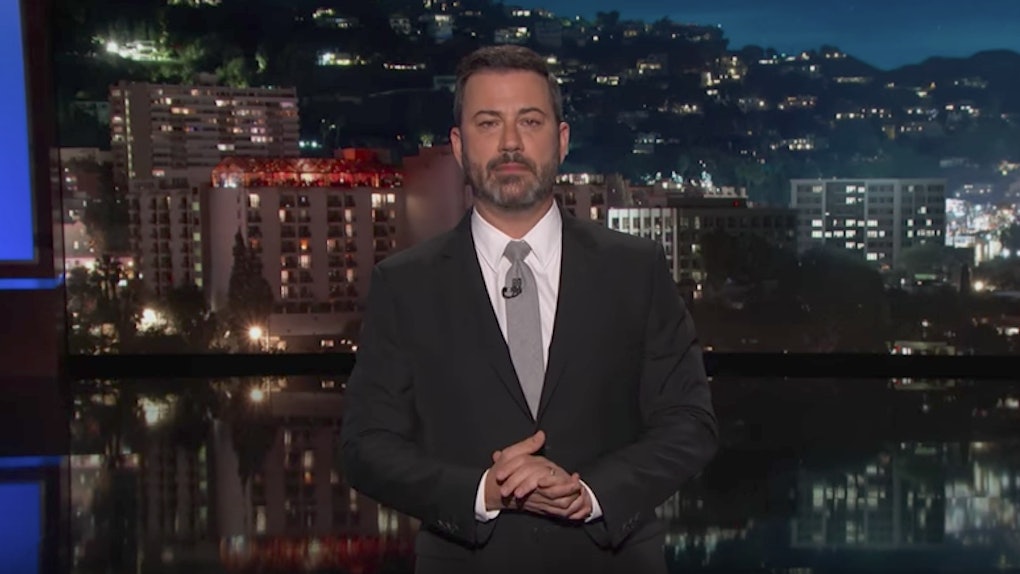 On the day his hometown became the site of a national tragedy, a video of Jimmy Kimmel's Las Vegas shooting monologue drew attention after the late night host delivered an emotional address on his nationally televised show. During the monologue, Kimmel lamented the "inexplicable" attack that took place the night before in Vegas -- which became the deadliest mass shooting in modern American history -- while the comedian also criticized Congress members for a lack of new gun laws. Kimmel said of the massacre,

It’s the kind of thing that makes you want to throw up or give up. It’s too much to even process — all these devastated families who now have to live with this pain forever because one person with a violent and insane voice in his head managed to stockpile a collection of high-powered rifles and use them to shoot people.

The attack in Las Vegas began at around 10 p.m. local time on Sunday night, Oct. 1, about 30 minutes after country music singer Jason Aldean had begun performing for a crowd of over 20,000 at the city's Route 91 Harvest music festival.

It was during that performance that a gunman began firing shots at the crowd from the 32nd floor of the Mandalay Bay Resort and Casino, located across the street from the concert venue.

By the time police entered the shooter's hotel room, he had reportedly killed himself. Meanwhile, the attack resulted in at least 59 people dead and over 500 injured, all according to the Washington Post.

With the attack now promising to reignite a national debate on gun laws, Kimmel rejected the notion that such massacres are inevitable. He said,

The whole of Kimmel's monologue on Monday can be viewed in the video below.

The late night host also had choice words for those in government, whom he criticized for not doing more to prevent such events from happened via legislation.

President Trump is visiting Las Vegas on Wednesday. He spoke this morning, he said he was praying for those who lost their lives. You know, in February, he also signed a bill that made it easier for people with severe mental illness to buy guns legally. The Senate majority leader, Mitch McConnell, the speaker of the House, Paul Ryan, a number of other lawmakers who won’t do anything about this because the N.R.A. has their balls in a money clip, also sent their thoughts and their prayers today — which is good. They should be praying. They should be praying for God to forgive them for letting the gun lobby run this country. Because it is, it is so crazy.

The Las Vegas native's monologue on Vegas -- and his criticism of lawmakers on Monday -- is far from the first time he has provided input on a national political debate. In September, Kimmel had used his airtime to lobby against the Graham-Cassidy bill, Republican senators latest effort to repeal Obamacare.

In the process, he attracted criticism from people who asserted that it was irresponsible for Kimmel to speak so boldly in an area in which he has no expertise.

During his Monday monologue, Kimmel appeared to give a nod to that criticism, telling his audience,

I want this to be a comedy show, I hate talking about this. I just wanna laugh -- you know -- about things every night... It seems to become increasingly difficult lately.

Kimmel was just one of a number of late night hosts who discussed the shooting in Las Vegas during their shows. Among the others were Trevor Noah and CBS' James Corden.